Brown Univ. Students Vote for Slavery Reparations, But How About Making University Donate Most Of Its Endowment?

Brown Univ. Students Vote for Slavery Reparations, But How About Making University Donate Most Of Its Endowment? 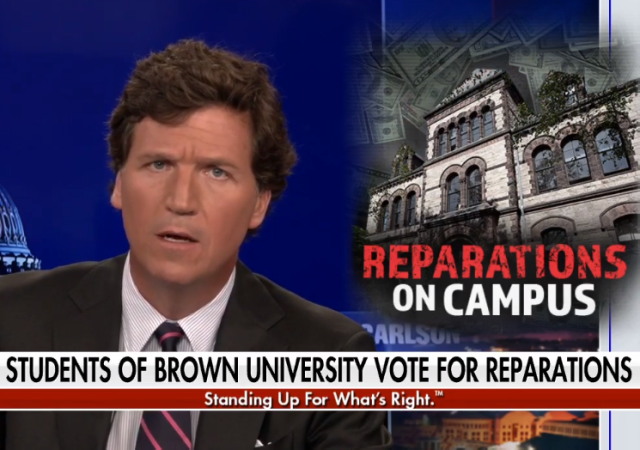 The students of Brown University have voted for reparations for descendants of slavery who are affiliated with the school. Based on its massive endowment, this should be an affordable virtue signal for the school.

But is it really enough?

Christian Schneider of The College Fix has details:

By an overwhelming margin, Brown University students have voted in favor of reparations for descendants of slaves affiliated with the school and its founders.

The referendum last week asked the students two questions: whether the school should make “all possible efforts to identify the descendants of enslaved Africans who were entangled with and/or afflicted by the University and Brown family and their associates” and whether those descendants should receive reparations.

Of the 7,000 undergraduate students at Brown, 2,000 cast ballots in the reparations referendum.

The recommendation now goes before administrators, who have the ultimate authority on the matter at the Ivy League institution.

A resolution passed by the Undergraduate Council of Students on February 24 suggested the reparations would come in the form of preferential admissions for the descendants of slaves associated with the school and its founders, as well as scholarships and direct payments to those individuals.

Tucker Carlson recently addressed this issue on his show and suggested that if Brown University is serious about this, they aren’t going nearly far enough.

Tucker: Brown University must get serious about diversity

Beginning tomorrow, Brown University ought to be forced to send $4 billion of its endowment to Black Lives Matter, and then send the fifth billion to Al Sharpton, who’s been waiting a long time for a payoff like that. Five billion is a lot of money.

On the other hand, it’s hardly equal to the cost of slavery. It’s just a start. Next, Brown should be required to open its dorms to the more than one thousand Rhode Islanders who are homeless on any given night. As of now, they’re living in stinking shelters, or sleeping on cardboard mats on the sidewalk, as a small group of rich kids gets the whole leafy Brown campus to themselves. Call that what you will, it’s not equity. Time to decolonize it.

Watch the whole thing below. This is Tucker at his sarcastic best. When I was watching this live, I laughed out loud. Tucker’s description of students leaving Brown and a “caravan of Subarus on Thayer Street leaving town” is gold.

In addition to nuking the school’s endowment, each of the little cupcakes should provide 33% of all their future earnings (include their spouse’s earnings for marrying stupid), and 100% of their inheritance or trusts.

33%? No.. they should only be allowed to keep 33% of future earnings and should provide 67% of their earnings for reparations.

So the little Marxests voted themselves free money.
Bless their hearts.

From their narrow, politically congruent perspective, they stand for the Rainbow of inclusive exclusion. Not black, perhaps; but, in principle, brown, and white, and, in practice, yellow, red, and orange, too. #HateLovesAbortion

People who were slaves deserve reparations from people who owned slaves, we should start a commission to determine how many of those two groups exist today.

Perhaps Joseph Robinette Biden, Jr. could head up that committee, he has been in the Senate for two hundred years so certainly he is knowledgeable and qualified

About 33% of AA males in this country are the direct descendants of slave owners. How would that figure in to this equation?

Ask VP Kamala Harris who, by her father’s account, is descended from a slave owner in Jamaica. That ought to be worth a laugh, like her interest in going to the border.

But they didn’t hold slaves so wouldn’t have to pay, but if they feel really really really guilty that there was a slave owner in their ancestry I guess they could compensate someone who was a slave voluntarily? Joe Biden was in the senate at the time maybe he could help them find one.

How easy is it to vote for something that you’ll never have to pay? Ask the Affirmative Action fools/tools that matriculate at Brown.

So less than a third of the undergrad student body even voted and the administrators are supposed to take this seriously? The administrators should simply say “Well, bless your heart, and thanks for you opinion,” dismiss the entire idea, and remind them that they are temporary students at the university, they don’t run the place, and please stop pretending to be adults and sending us these ill-thought-out non-binding resolutions.

Remember that not too long ago, these students would probably have though eating Tide Pods was a cool idea.

I like the idea of something a little less draconian and closer to home than Tucker’s suggestion, and actually feasible. Send a note to the parents of all students stating that, because of the preference expressed by their children, effective immediately, the portion of endowment earnings previously allocated to supporting the university’s cost structure will be placed in a fund for appropriate payment of reparations at some future date and tuition increased accordingly.

In fact, I thought that LBJ’s Great Society program and everything since, including Affirmative Action, was the payment of reparations. Finally, I have some ancestors from Ohio and Pennsylvania who probably could be determined to have been in the Union Army and been wounded or died fighting in the Civil War. What are their descendants going to get.

IMO the single best reparations payment that could possibly be made is a full public school cost voucher given to every single Black kid to enable them to get the best education that money can buy. It also may be the best way to give them a chance to get off of the Inner City Ghetto School Plantation.

Interesting idea, the vouchers for black children. Someone needs to run the numbers on the cost and try to give best estimates of rewards and return. It is likely that in the long run this would be to everyone’s benefit. Unfortunately, like all “ free” things it would be abused by the grifters and politicians ( also grifters)

The cost of “a full public school cost voucher given to every single Black kid” is negative as I see it. That money is now given to the ghetto public schools directly, with pitiful results. Any improvement in educational outcomes, as is widely reported for charter schools, should reduce welfare, crime, healthcare costs and increase taxes to the government from better employment outcomes.

The standard scam that thrives on this type of government handout is the creation of phony private diploma mills that eat profitable vouchers and crap out untrained graduates. As I recall, the surge that peaked in the late ’80s was fertilized by some new educational benefit awarded to veterans in that time frame. I don’t recall the details, but one of these mills was a minor account of ours for computer systems, which we ended up having to repossess after the FBI did their thing.

Aren’t these oh-so-dedicated students ignoring the modern day slavery where the Democrats are bringing in children and women for sexual slavery and drugs for chemical slavery? Who do they think (OK, so they don’t/can’t think) controls the borders? The organized crime is obvious. And, again, it is the Democrat Party supporting slavery.

Yet these Brown students are so proud of there virtual signaling with other people’s money. Such good Marxist useful idiots. I hope they enjoy working on the collectivist farms.

“their” not “there.” I need a computer that can think and spell.