“In short, this facility is a health and safety nightmare. The Biden administration is now presiding over the abuse of children.” 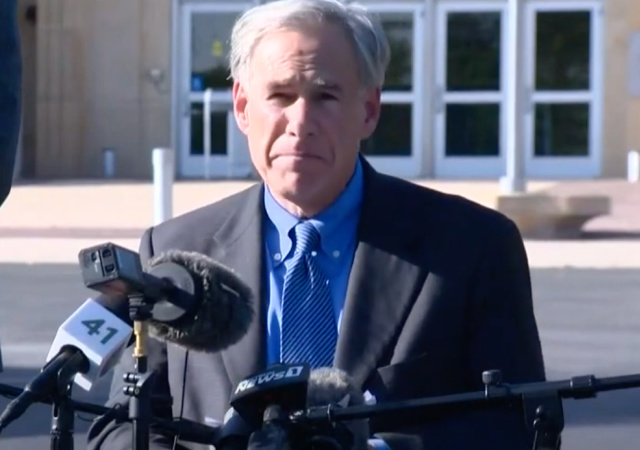 During a Wednesday evening press conference, Abbott said he received tips that alleged the children at the Freeman Coliseum facility were being sexually abused and were not eating enough.

“These problems are a byproduct of President Biden’s open border policies and the lack of planning for the fallout for those disastrous policies,” Abbott told reporters.

The governor said that separate complaints were sent to the Department of Health and Human Services and the Texas Department of Family and Protective services Wednesday, alleging four different kinds of child abuse.

The agencies then informed the state leadership.

Abbott declared: “In short, this facility is a health and safety nightmare. The Biden administration is now presiding over the abuse of children.”

The governor directed the Department of Public Safety and Texas Rangers to start investigating the facility as they all wait for Biden to step in.

“The Biden administration caused this crisis and has repeatedly failed to address it,” stressed Abbott. “The administration failed to plan for the influx of children that they invited to come. Now they face allegations of despicable child abuse and neglect.”

Complaining to Biden does not accomplish a thing. Greg Abbott needs to be more proactive but the problem is that San Antonio is bluer than blue.

The question is how long is Biden planning to “incarcerate” the kids and what can he do with them? He is stuck with the problem that he created himself.

True, but complaining lays the groundwork. Abbott should do what any state does when there is claims sexual assault of minors in a facility- State police/Rangers, child psych and social workers, close the facility to gather evidence. It is obvious the federal government and the President are complicit in avoidable, child exploitation in a controlled environment.

The question is how long is Biden planning to “incarcerate” the kids and what can he do with them?

The way I understood the situation is that federal law requires the unaccompanied children to be turned over to the Bureau of Refugee Relocation no more than 72 hours (3 days) from their detention at the border. Of course, that means that many of those children currently in detention “pods” are being held in violation of federal law. But that doesn’t seem to worry Biden or Harris – they both act as if nothing is wrong on our southern border.

Stand up for social justice? Stand against emigration reform?

Catastrophic Anthropogenic Immigration Reform. It seems that Democrats cannot abort the baby, cannibalize her profitable parts, sequester her carbon pollutants, and have her, too.

This is all so typically Democrat:
“We’re introducing a brand-new federal program that will help all of you (group)!”
“OMG, the new program is out of control, overwhelmed, and those people are now actually worse off! Plus, we’re hemorrhaging money!”