Trump told the election investigator “she would find ‘dishonesty'” when she scrutinized the ballots. He did not tell her “find the fraud.” 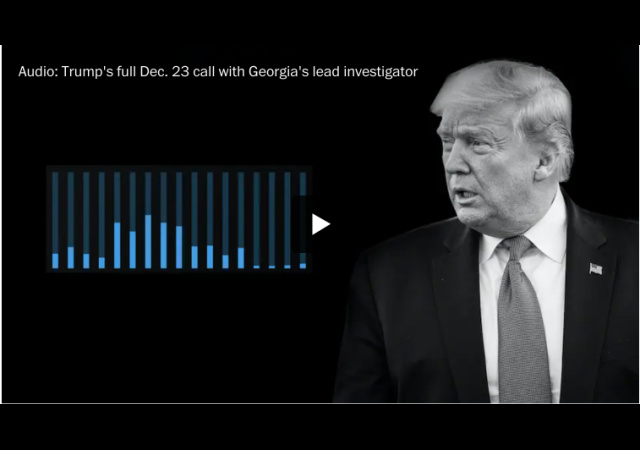 The Washington Post corrected its story about a phone call between President Donald Trump and Georgia Election Investigator Frances Watson.

It was all false.

The original story said Trump pressured Watson to “find the fraud” in the state that led to President Joe Biden winning in November 2020.

Trump also told Watson she would become a “national hero.”

All based on anonymous sources.

We now know the story came from Jordan Fuchs, the deputy secretary of state, told them. Watson told him about Trump’s comments.

State officials did not think Watson had a recording of the phone call. Without concrete proof, WaPo published the remarks as absolute truth.

Officials found “the recording on a trash folder on Watson’s device while responding to a public records request.”

The Wall Street Journal got the audio first. Major props to them.

“I hope you’re going back two years as opposed to just checking, you know, one against the other because that would just be sort of a signature check that didn’t mean anything,” Trump said. “But if you go back two years, and if you can get to Fulton, you’re going to find things that are going to be unbelievable, the dishonesty that we’ve heard from, just good sources, really good sources.”

“But Fulton is the mother lode, you know, as the expression goes. Fulton County,” he added.

WaPo did not retract the story. Instead, the publication issues a correction and changed the headline. However, the headline remains misleading: “Trump pressured a Georgia elections investigator in a separate call legal experts say could amount to obstruction.” 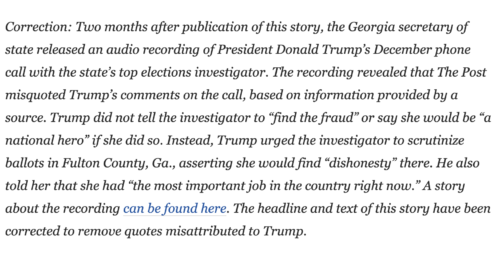 The newspaper published a brand new article, though.

This kind of mistake is beyond serious. There's zero accountability in major corporate media anymore, yet they continually insist they're the ones holding the line on the truth. And always remember what should scare you about the media is what *doesn't get exposed." pic.twitter.com/ceBaApCZQ8

Nobody at WaPo will be held accountable for reporting fake quotes from anonymous sources attributed to the president of the United States that were completely made up because corporate media is a blatantly corrupt enterprise https://t.co/1wKEaihB0C

Politicians should tell the truth, but telling the truth is only one of several jobs they have.

For journalists, telling the truth is the whole job. https://t.co/TMonfBsXcz

I don’t see the difference. What was wrong with asking her to “find the fraud”? What’s the difference between that and asking her to find the dishonesty? Either way the only thing it can possibly mean is that he was convinced there was fraud and dishonesty to be found, and all one had to do was look for it. Whether this was in fact the case is irrelevant; all that matters is his intent, and his intent was crystal clear. He was trying to help justice, not obstruct it, and that should be the end of the story.

The fake quotes DIRECT her to find fraud. The truth is he merely informs her that she will find dishonesty when she looks.
BIG difference in my mind.
And, the WaPo corrects quotes ‘misattributed to Trump’ when the truth is the quotes never were uttered … nothing close … made up Lies are now misattribution?
The MSM constantly uses the phrase “false claims” but several indictments have been handed up. Investigations proceed – albeit too slowly. If claims are never investigated, then all claims become false by definition.
Claims that Trump said this or that during the phone call were presumed true – absent proof – but now have been PROVEN false. Innocent until proven guilty except for some?
Claims of election fraud are pending but … those pesky indictments. All ham sandwiches?

If you don’t know the difference between a news company publishing a made-up quote vs a real one, then you are beyond help.

There is no difference between the quote they published and the real one. One’s just a paraphrase of the other. And since they never claimed to be working from a recording or transcription, but from what a third party had told them, it was always to be assumed that the quote was a paraphrase.

You are usually more discerning. Trump’s lack of discretion does not warrant such casual disposition.

WaPo is the mother of lies, all the way back to the inspiration of your username. Not only is there no lie they wouldn’t tell, they will readily become the sponsor of any lie just to stay in the “news cycle”.

So long after it might have made a difference, they’ve corrected one lie out of how many hundreds?

Next, expect the Post to get an award for its “honesty.”

“At a state dinner at the White House, president Trump told Putin, “Our plot to destroy America is working. We shall squash freedom and then you can use me as your foot rest as you relax and joyfully dine on the flesh of American babies!””

Actual comments from Trump as per recording of the event, “Vlad… pass the salt?”

WaPO kept a list of all the times they “believed” that Trump lied. It included exaggerations, jokes and sarcastic comments that he made – so it was a very disingenuous list.

>> My question – who keeps track of al of WaPo’s lies ? Someone should. There are plenty.

+ WaPo’s slogan = “Democracy Dies in Darkness” is demonically ironic since they are the ones extinguishing the candles.

Hopefully, they die a slow death anyways now that he is out of office. It warmed my heart to see them all squirm and suffer post-election ratings bombs.

A day ending in ‘y’ and proof of more media malfeasance.

I’m pretty sure I had the entire audio of that call downloaded from Youtube to my computer within 48 hours of this story.

In a decade or two, after all the damage has been done, and if we have a functioning Republic and an operative Constitution, the BlueAnon media might start publishing corrections to their ‘reporting’ on Critical Race Theory.

From your keyboard to God’s monitor…….Amen!

I read in Daily Kos that Trump had called the investigator a “lying dog-faced pony soldier”. If this is true, it would be grounds for impeachment.

Since the ‘anonymous source’ obviously lied repeatedly to the WaPo, we can expect him/her to be outed by name, right? Because that’s how you keep sources honest. Right, Mr. Vind(person) and Eric C?

So once again the fake-news communist propagandist liars pull their same trick. They loudly proclaim their fake news, then later, they quietly retract most of it. Lies get half way around the world before the truth can get it’s boots on.

This, and a whole string of prior incidents, is why local papers refuse to print anonymous accusations of wrongdoing.

The Washington Post should raise its ethical standards to those of a local weekly newspaper.

In the news business, comparing a daily to a weekly is a serious insult 🙂

Priority number one is to disseminate and propagate the Dhimmi-crat Party’s narrative and talking points, while bashing conservatives and portraying them in the worst possible light.

The corrections are issued through clenched teeth, only because these idiots still feel the need to adhere to the theatrical pretense that they’re objective “journalists” and not card-carrying, gleeful, Dhimmi-crat propagandists.

What should scare us more than the what isn’t exposed involving fake news is the misinformation campaigns they are running all seem to be succeeding beyond their wildest dreams.

“Paraphrased”? Implying it was an honest mistake?

And they wonder why they are called Fake News.

The sad thing is that with all of the video’s of the corruption and the self-incriminating videos of pole workers admitting they re-ran Biden votes have been charged for their crimes.

The process is broke here in GA.

The Post’s tag line should be “Democracy Dies with Fabricated News Stories”.