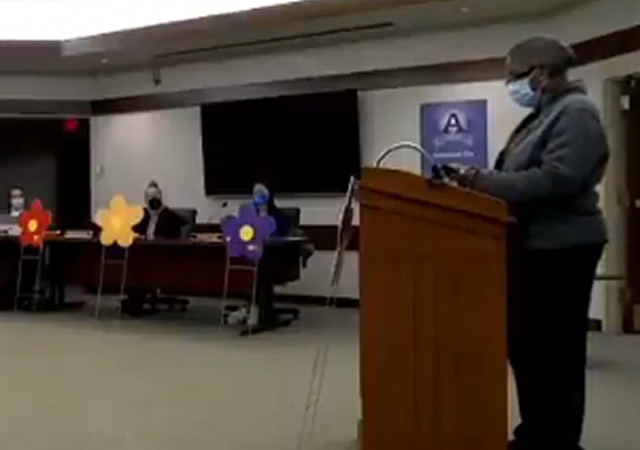 This woman points out that this ideology is turning children against their parents. She is ultimately cut off by one of the white board members.

A black woman spoke up at a School Board meeting in Beachwood, Ohio, to take issue with the board’s use of critical race and gender theory to divide families, pit students against their parents, and create a racist environment where none had existed before.

“If a lot more of the residents knew of the mess you’ve made of this school system via the curriculum as policy you would all probably lose your position in the district,” she said.

Through her required face mask, the woman identified herself as Ms. Taylor, a Beachwood resident for over 20 years, and said that she raised her children in the community. Her children are successful professionals.

She said that many school districts in Ohio “are now hiding their curriculum from its residents because they’re teaching students to become bigots toward their peers, adults, and law enforcement. Many school districts within this congressional district [Ohio-11] are on board for allocating funding and teaching young students the how-to about changing your gender, child pornography, and pedophilia, and where to find those websites, what sex toys to purchase, and how to use that which is purchased.”

WATCH: A woman in Ohio is furious at her school board for critical race theory indoctrination in schools pic.twitter.com/JhTM31iOW3

The woman gets up and reams them a new one because they are teaching Critical Race Theory.

The board spokesman retorts that he takes objection to everything she said, and that the board is committed to “equity” for every student.

Vindicated her pretty well, I think. Time to kick some board members out.

Certainly it is. But that almost never happens with school boards.

This woman should run for school board.

Where are MORE parents like this woman? And, I wonder how many other parents showed up to this school board meeting? It would be wonderful to learn that, in the aftermath of this meeting, this parent ran for, and won, a seat on this board! The formula for successful families, and thus, a strong, successful nation, begins with parents LIKE THIS WOMAN!