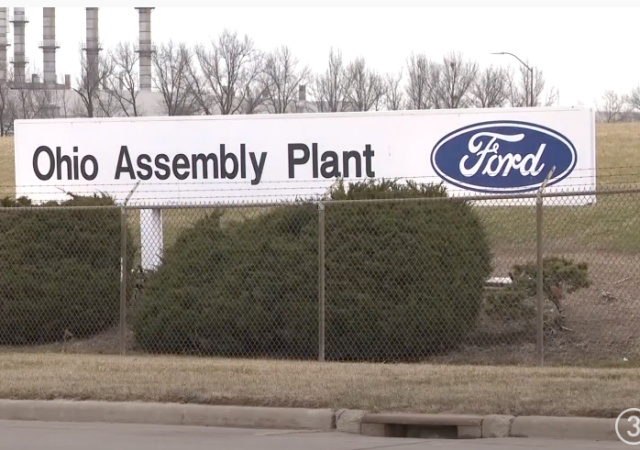 The United Auto Workers (UAW) told Ford employees at an Ohio plant the company wants to move production of a new line to Mexico instead of their Ohio Assembly Plant (OHAP).

Ford has not made its decision public, but the union insists it received “strategically limited information,” and the situation is “rapidly evolving.”

It’s weird (not really) this happens only a few months after President Donald Trump left office.

The letter from UAW Vice President Gerald Kariem stated that at the heart of the last contract with Ford signed in November 2019 was to increase job security and Ford, in turn, responded with a commitment to invest $900 million into the Ohio Assembly Plant, some of which was for “next-generation product to be added in 2023,” he wrote.

“Unfortunately, Ford Motor Company has decided it will not honor its promise to add a new product to OHAP and, instead, it intends to build the next-generation vehicle in Mexico,” he wrote.

Ford only said it remains “committed to the factory.” More from The Wall Street Journal:

In a separate letter to employees, the Ohio plant manager, Jason Moore, said conditions have changed since the last UAW contract was negotiated and pointed to other investments the company has made at the factory, including hiring more than 100 workers to increase pickup truck production.

Mr. Moore’s letter didn’t reference plans to move a future vehicle to a different factory. A Ford spokeswoman declined to comment on the UAW’s statement that the company has redirected the vehicle to Mexico.

Kelli Felker, Ford global manufacturing and communications manager told The Detroit Free Press the company is “always looking at our options” but does not “discuss future product.”

Felker mentioned Ford has plans “to invest $6 billion and create and retain 8,500 jobs in America during the course of this four-year contract.”

President Joe Biden has not said anything yet. Ohio politicians want to pressure Ford to keep the new car production in the plant:

“We’re working with the White House. We’re going to put a lot of pressure on Ford management,” Ohio Sen. Sherrod Brown told reporters Wednesday. “It’s the same old story — they make promises or shut down production or fail to invest and they move to Mexico because they can save on labor costs and environmental costs. That’s what the auto industry has done in our state for decades, and we’re fighting back.”

I wonder if the media and the left will go after Brown for criticizing the auto industry, which has always seemed to be a sacred cow for the left.

Sen. Rob Portman (R): “I’m very concerned about it. I don’t know that it’s accurate, I hope it’s not. Ford has made a commitment to be the biggest U.S. manufacturer — in other words, of all the U.S. companies — that they will manufacture more in the United States than anybody else. They do that now. I hope that they choose to continue to keep that product at Avon Lake, and I’m weighing in strongly encouraging that.”

Toledo Democratic Rep. Marcy Kaptur: “For Ford to back out of its commitment to workers in Ohio, and instead export American jobs to Mexico, would be devastating decision for Ohio families and the greater regional economy. Every vehicle or component manufactured in Mexico represents a lost job and broken promise to America’s manufacturing work force.”

Does the UAW support the Democrat Party? Then this is actors on a stage. The little people/working class pay the price.

Unions exist to extract tribute from labor so that labor may have their jobs. They really serve no other purpose.

Unions exist to extract tribute from labor to donate to the Democratic Party. Any jobs that might come into being after collection time are incidental.

Stupid should hurt. Make the price higher until they finally get past the sixth grade education wise.
Dumb as a box of rocks and less useful.

I’d rather have mexican made cars than union made cars.

If you are talking workmanship, I agree. I live in an area where there are a lot of older cars still on the road. There seems to be a ton of aging Buick Park Avenues, LeSabres, and Century models still on the road, and in good condition. The paint may be a bit faded, but still sound. Nothing is falling off of them. If one walks up to one in the parking lot of the local grocery or big-box store and looks in the lower left of the windshield, one finds virtually ALL have VINs starting with “3”. Mexico.

I TRY to “buy American”, but, my latest vehicle is a 2021 Pacifica. It was made in Canada. My Pontiac is US-made, however.

For workmanship and reliability, nothing beats Toyota.
Ford has gone back to the old joke; FORD=Found On Road Dead.

My Toyota was built in Indiana.

I like my 96 SHO and the 97 Expedition is still going strong. However, the best we have had was the ’99 LX470, I sold it to my partner for his son and it still gets rave attention. The 470 engine is good for at least 500000 miles. The cost of new vehicles makes the second hand market affordable.

Just an observation: it has now reached the point where if one wants to provide work for one’s fellow Americans, one buys a Nissan, BMW, Mercedes, Subaru, Toyota, Honda, or, I think, Mitsubishi. All are foreign-owned, but the jobs go to people in Ohio, Tennessee, Alabama, and the Carolinas. Dodge and Chrysler sedans, and Ram trucks are still made here, but by a foreign company.

Meantime, Ford slaps their name on Indian-made cars; builds others in Mexico, and I think, China. GM has become virtually nothing more than a car importer. Buicks from China and Korea, Chevys from Korea and who knows where else. All that remain of American Chevys are Malibus and the pickups, and the Malibu is not long for the world.

I don’t want to hear any of this blather about where the profits end up. Every single one of us can buy all the Toyota, Nissan, Honda, or whatever stock we want, and get a share of the profits. That, and those profits going to Korea and Japan and Germany at least partly come back in the form of airliner, military, jet engine, and power generating equipment being exported.

I look at it this way: I’d rather buy a product made by my neighbors or fellow Americans than some re-badged import from the two remaining “American” car companies. Those jobs in turn provide other jobs in our communities, and builds our local economies, not just the wealth of some hedge-funders.

(Two of my neighors bought Buick Envisions. Both are elderly so likely are at least somewhat patriotic. I wonder if they realize they bought Chinese-made cars? The only Buick left that is a real Buick is the Enclave. Once that’s gone, so is Buick in my view.)

Don’t forget Volvo, they have a brand new body shop, paint shop and assembly hall down near Ladson, SC.
Same with Mercedes, they expanded the Sprinter van plant in Summerville, SC.

Toyota’s 3 largest assembly plants in the World are in the USA.

And Toyota can’t make the Tacoma or Camry fast enough to meet demand.

don’t forget volvo is owned by a chinese investment group.

Might want to consider the 21 to 28% tax increase from the regime.

Well, they voted for these idiots, didn’t they? Why are they surprised at the results?

The Democrats have always been for the little guy. Mexican and Chinese men are often lttle guys….

So on and so forth!

this word (unexpectedly gives Biden cover in the press by trying to insinuate that it had nothing to do with his policies and was random – but for 74 million of us – this was all expected!

Has Ford actually announced that they will be moving part or all of the production facility to Mexico? I have zero trust in all three parties in this drama (Ford, the UAW, and the media), but leftists love to create a nonexistent crisis and take credit for “solving” it (see: global warming, systemic racism, #MeToo, so-called epidemics of white supremacy and gun violence, burning of black churches, MAGA-inspired anti-Asian hate crimes, male-female wage gap, etc.).

Now that’s what I call “Bringing it back better.”

Mr. Trump specifically twisted the arms of the Big Three American car makers to have them keep some production in the country. Now that he’s gone the arm-pressure has been relieved.

Ford is just looking to make more money, and the unions have no leverage. Where can the unions go?

Ford feared what Trump would do if it screwed over American workers. However, they have no such concerns about Biden*. They know he’ll do much more damage to Americans than he will ever do to the company.

No, Trump made production more attractive in the US with the corporate tax breaks that the lefties screamed and cried about.

The UAW endorsed Biteme….so go find that miniature violin to play “Cry Me a River” with.

The UAW may have endorsed Biden but I am sure that the workers voted differently. Ohio went 8 points red in 2016 and 2020 and that is one reason that I am planning to move back to where I was raised.

Trump cajoled and got some tax breaks that made it fiscally favorable for Ford to keep certain production in the U.S. instead of off-shoring it. Realistically, Ford’s responsibility is to maximize the retun on investment of the investors. In comes a new administration that detonates that favorable set up, or announces the intention to. The result is that it becomes financially beneficial to Ford to move production.

(sarc) Who could possibly have predicted this? (/sarc)

Not a coincidence that this is happening the same time as new regime is drafting up tax! tax! tax! bills

As an unintended side efffect, maybe those immigrant families will stay in Mexico voluntarily now.