A district policy made it impossible for Susan Parsons to defend herself. 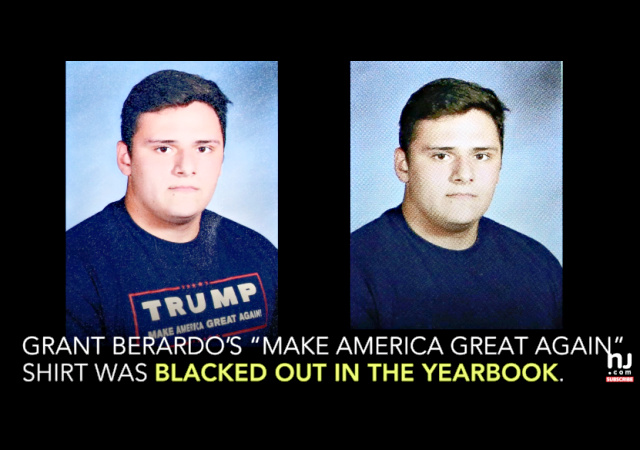 Former New Jersey teacher Susan Parsons will receive a $325,000 settlement from the Wall Township School District after alleging her bosses forced her to edit a MAGA shirt in a 2016-17 yearbook.

Parsons, who voted for President Donald Trump, claimed her bosses made her the scapegoat after the story made national news, leading to hate mail and threats.

The school district suspended Parsons at the time. She returned to work, but the school stripped her of her yearbook advisor job.

The story involved Grant Berardo, but two other students alleged censorship over Trump:

According to CNN, a brother and sister at the school also alleged censorship. Wyatt Debrovich-Fago wore a sweater vest in his picture with a Trump campaign logo, but it was seemingly cropped out of the photo.

His sister, Montana, served as president of the school’s freshman class. That role usually comes with a quote next to a picture, and Montana selected: “I like thinking big. If you are going to be thinking anything, you might as well think big.”

Parsons eventually filed a lawsuit “seeking damages for a pay increase that was withheld, emotional harm and other damages.”

Parsons could not defend herself because the district had a policy prohibiting “employees from doing interviews without the superintendent’s permission.” She asked the district to eliminate that rule.

In her first interview about the 2017 incident, Susan Parsons told NJ Advance Media she was shocked Wall Township School District administrators blamed her for making an edit she says was demanded by the school secretary, a proxy for the principal.

Now, Parsons, a veteran digital media teacher, wants school officials punished for the lie fed to the media and community, she said.

“If you have any teacher that lied, withheld evidence, conspired to hide the truth… they wouldn’t have a job,” Parsons said. “How is it that this isn’t applied to administration as well?”

This is what happened, according to Parsons:

Parsons’ version of what transpired hinges on what she said was a verbal order from McChesney as the secretary flipped through the yearbook proofs and ordered changes.

“That’s got to go,” Parsons recalled McChesney telling her as she pointed to the T-shirt in December 2016, just before the yearbook deadline.

Though Parsons did not agree with the order, she did not think the decision was politically motivated, she said.

“It was just controversial,” Parsons said of the T-shirt.

Parsons said McChesney was an authority figure in the school who had “carte blanche” over the yearbook pages and routinely communicated orders from Sirchio, the school principal. The school has always forced Parsons to edit yearbook photos to avoid anything controversial, including photoshopping shirts onto students on a beach trip and blurring a feminist sticker on a laptop, Parsons said.

The Wall Board of Education did not admit any “wrongdoing or liability.”

She received $25,000 in 2019 after she challenged the school’s media policy, which left her unable to defend herself, as I previously noted.

Parsons could not have a normal life after the story:

The fallout made Parsons akin to “some scourge,” she said. She was flooded with hate mail and voice messages, her personal swimming lesson business received negative online reviews after the controversy and she no longer felt safe leaving her quiet street to run errands in the community.

A life of bike rides, walks on the beach and family parties morphed into Parsons holed up at home, missing events with her two children and grandchildren, she said.

What hurts the most about the experience, Parsons said, is that her character has been scarred.

“Even though this information is coming out, not everyone is ever going to be told the truth,” Parsons said. “Most people don’t care. They’ll just remember ‘that woman, that nutcase, who did she think she was?’”

My mind is boggled! So the co-conspirator in the wrong doing gets a settlement but the people whose pictures were edited got nothing?
The old Flip Wilson, “the devil made me do it” excuse is apparently of good legal standing

I should think that if they felt slighted, that they would file their own lawsuits. She filed over damages to herself and her reputation, not over theirs.

Has the statute of limitations run out for the other parties, if not, it would be pretty funny if there were additional lawsuits.

Why should they get anything? What damage did they suffer?

The school has always forced Parsons to edit yearbook photos to avoid anything controversial, including photoshopping shirts onto students on a beach trip and blurring a feminist sticker on a laptop

It sounds like there’s a bigger problem here than politics.

Amazing; this is a big story; why isn’t it all over the media? [Yes, I’m being sarcastic].