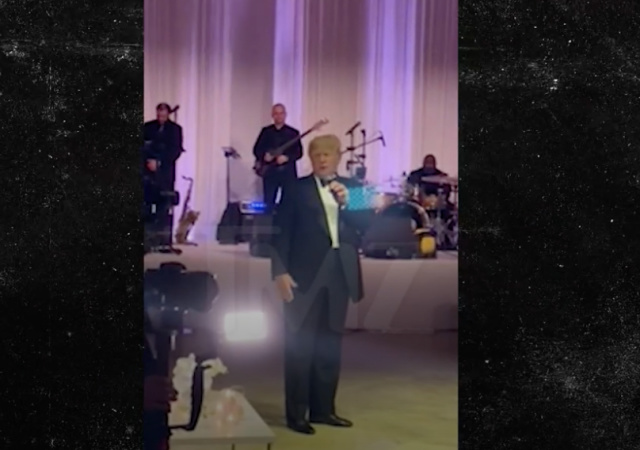 President Donald Trump crashed John and Megan Arrigo’s wedding at his Mar-a-Lago resort. He said a few words for the newlyweds, but quickly turned on President Joe Biden.

Trump ragged on Biden over the border crisis. He even mentioned the children in facilities:

And China, the same thing, they never treated us that way, right? You saw what happened a few days ago, was terrible, and uh, the border is not good, the border is the worst anybody’s ever seen it, and what you see now, multiply it by 10, Jim—you would know how to handle the border tougher than me. We have to, and the tough is… in the most humanitarian way, because that’s what it is. What’s happening to the kids, they’re living in squalor, they’re living like nobody has ever seen anybody, there’s never been anything like what’s, and you’re gonna have hundreds, and you have it now, they have the airplane photos, the shocks, and they call ’em shocks, and these things are showing thousands and thousands of people coming up from South America and it’s gonna be, it’s just uh, look, it’s a disaster. It’s a humanitarian disaster from their standpoint, and it’s gonna destroy the country, frankly, the country can’t afford it because you’re talking about massive, just incredible massive amounts. Our school systems, our hospital systems, everything.

Trump brought up the election as well:

So it’s a rough thing, and I just say, “Do you miss me yet?” We did get 75 million votes, nobody’s ever gotten that. They said, “Get 66 million votes, sir, and the election’s over.” We got 75 million and they said… but you know, you saw what happened, 10:30 in the evening, all of a sudden I said, “That’s a strange thing, why are they closing up certain places, right?” Now, a lot of things happening right now, I just wanted to say, it’s an honor to be here, it’s an honor to have you at Mar-a-Lago, you are a great and beautiful couple.

That was out of line.

Yeah. It would be one thing if it was a press event or something, but a wedding? It’s crass.

Yes. It is. And, the videos will turn up in opposition campaign ads for years to come. He is supposed to know better.

Don’t presume to speak for the bride and groom. Trump was an invited guest, not a crasher, and apparently a friend of the groom. And I’m sure anyone holding a wedding a Mar-a-Lago these days is a Trump supporter, and would be honored to have him stop by. They are making a political statement just by holding an event there now.

Well, it is clear that Trump is pissed, rightfully so. I am looking forward to seeing him extract retribution.

There have been a bunch of things way more out of line that his venting at that time.

He won’t get the opportunity. Even if the USA still technically stands, the liberals will burn and destroy what remains of the country first rather than allow that. Anyone who can, should study the history of China and what happened leading up to and including Mao taking power. Similar to the Bolshevik revolution in Russia. The patterns are the same, and they are being implemented here, without the recognition by the liberals using them that the wildfire they are starting will burn uncontrollable – a fatal flaw of all mob mentality. They burn and destroy everything in their path. Everything.

That IS “woke” culture – a very apt entitlement that embodies everything wrong with it, sheer and total: ignorance, laziness, arrogance, and volatile lack of any impulse control combined with an insatiable desire for attention. And that’s the rising tide.

Unless he knew these people well, or the like, this is the social equivalent of a drunk dial.

I’m glad to hear further reports that Trump was a friend of the groom and was invited to speak. That changes the tenor of this article completely.
MODERATOR: Please edit the headline to remove the scurrilous “crash” allegation.

I guess we know Mary’s feelings toward President Trump

Having done a bit more research on this, this article is misleading. Trump did not “crash” the reception, he was an invited guest. The groom being a longtime friend and donor means the politicking may not have been inappropriate for the people attending. Certainly the only linked article is a TMZ hit piece, not exactly where I would go for accurate journalism.

like I said,
mary is not a President Trump fan

I have been reading gonzotx comments on this site for years. The reason I follow you and read all your comments is because you are consistent. You don’t flip from day to day. You don’t suddenly shock me by posting trash about Trump or support hit peices that trash Trump. Quite frankly I’m shocked at how many commenters here are now in the tank with mark311.

Crashing the wedding of people you don’t know to promote your own issues is crass. That’s true regardless of whether you’re a street preacher or an ex-president.

Now, the headline and article were crafted to deliver the impression that that is what happened here.
They lied.
That puts an entirely different light on things.

It was Trump who was “being inconsistent” (though not in truth), not us.

I’ve been up most of the night working feverishly to analyze various reports and I think I did it. I cracked the code and solved the puzzle . . . .

That crafty old likable bugger from Scranton……he trusted the plan!

Assuming you are correct then his plan must have been to make Q supporters look like complete morons. Success!

The new husband is reportedly a “… longtime Trump friend and donor …” thus crash may be spin to some degree.

lots of new nicks, and all slagging Trump…

must be that silent majority i’ve heard about so much.

(either that or Moby wanna-bes)

With Trump, we all feel “…To death do us part…”

Even if he was an invited guest rather than a crasher, he could have been a bit more sundued with the political messages.

But, then, it’s Trump so not much surprise here.
.

Yes,, it is the day for the bride and groom….leave politics out of it.

Meh. If you invite the parson to speak, you can’t complain when he mentions God.
Trump didn’t say anything anyone who would invite him wasn’t fully expecting.

That’s a wedding reception, not a wedding.

still don’t get it, are we supposed to be outraged FOR the couple that invited him to their reception (a progressive trait…) and asked him to speak or are they outraged?
seems maybe the author jumped a shark and assumed he didn’t have some sort of permission to speak about that stuff at the RECEPTION.