Teacher Slams VA School District Over Critical Race Training: “You Do Not Speak for Us”

Teacher Slams VA School District Over Critical Race Training: “You Do Not Speak for Us”

“If you keep up this racist insanity, you will have successfully stripped us of every ounce of love of teaching.” 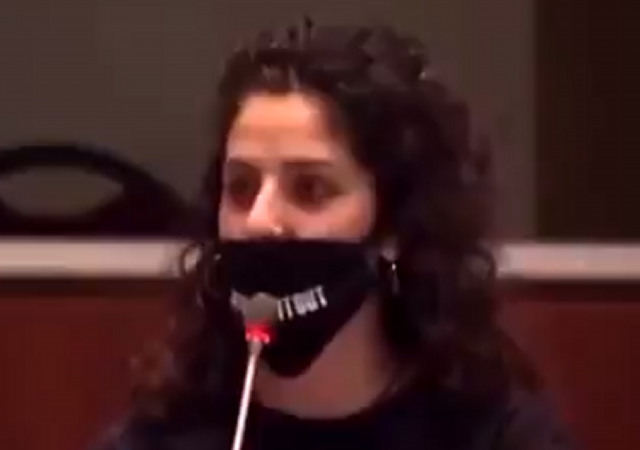 Back in December, Loudoun County in Virginia spent almost half a million dollars on race-based programs to implement in their public schools.

Like many public school systems, they’ve embraced Critical Race Theory. Not everyone is impressed.

A public school system in Virginia is spending at least half-a-million dollars on programs designed to counter systemic bias and oppression, the latest of many controversial initiatives connected to critical race theory.

West Nova News reported on Friday that Loudoun County Public Schools was paying more than $50,000 to the California-based Equity Collaborative, which says it focuses on uncovering “personal and institutional biases that prevent all people, and especially people of color, from reaching their fullest potential.”

The core tenets of its work are “oppression analysis, learning theory, and coaching for change.”

Since 2018, the consulting firm and its owner have received $422,500 from the county. According to The Washington Free Beacon, that included $90,000 in salary for Jamie Almanzan, the owner who is described as an equity leadership coach, and $120,000 for an eight-day “systemic equity assessment.” Much of the money — $314,000 — was directed in 2019 towards coachng and training sessions.

The response from a district spokesperson is a progressive word salad:

“Teachers follow the LCPS curricula to educate students to understand various perspectives so that they can think critically and develop individual viewpoints. LCPS wants to affirm diverse perspectives by engaging teachers and students in deeper learning around cultural literacy and authentic, challenging problems, including issues of justice and equity,” Byard said.

Things are not working out as planned. During a recent school board meeting, a teacher dressed down the board for forcing teachers to admit their privilege, white supremacy, and microaggressions.

This is a powerful response. Watch:

Here's what EVERY parent should know about this toxic, racist ideology: https://t.co/PP93a5BrKw pic.twitter.com/8wUY0BbLtH

The time for remaining silent is over.

More parents and educators must start speaking out like this courageous young woman.

This will only stop when parents start attending school board meetings, where they raise hell about all of this.

Yes. Please do this. Please come and be heard. Please try to find the time to vote for school board members.

My career, and the career of other conservative educators, depends on parents knowing what is happening and having the gumption to fight it with us.

No, this will not stop, progressives and leftists never do. Critical Race Theory will be repackaged and given a new touchy-feely name and it will continue

I’m willing to bet students in this school system can barely read and possess poor math skills. It is in this type of environment where this BS flourishes.

Why do you think the school board cares? If they did, they would have rejected teaching critical race theory from the outset.

They usually want to be reelected to their seats. And most people don’t like being embarrassed in front of the community.

I’ve found that even as a former K-12 parent (kids now in college) school board and administration seem to pay attention when I throw a clinker in their arguments.

Progressives want to indoctrinate your kids. They know, if they get to your kids – 80% to 90% can be turned into life-long Marxist-leaning ideologues. It’s indoctrination.

Nobody pays attention to school boards. That’s why Marxists started to target school boards 20 years ago. They know that just a small number of votes can get their people elected on the school board. Liberal media never called this out.

It all happened while America was sleeping. Busy parents going about their day and ordinary people trying to make ends meet. They don’t have time to think about school boards. Historically, school board have not been political. But Marxists have weaponized school boards and put forward radical teaching agendas – with respect to: Race, Gender, Anti-Capitalism, Pro-Marxism and Anti-Conservativism including rewriting history and revising language.

You are just hearing it now ? Well this has been happening over 20 years. It has just metastasized. While you were sleeping – your kids and your country have been stolen from you. This was planned and executed by Progressive/ Marxist groups. It is insidious.

The counterculture rises. It will only become stronger. Complacency has permitted the entrenchment of wokeism. There is a bumpy road ahead.

“Teachers follow the LCPS curricula to educate students to understand various perspectives so that they can think critically and develop individual viewpoints. LCPS wants to affirm diverse perspectives by engaging teachers and students in deeper learning around cultural literacy and authentic, challenging problems, including issues of justice and equity,” Byard said.

To translate: “Teachers follow the LCPS curriculum to indocrinate students to uncritically accept one perspective so they can serve as radical cannon fodder and think in lockstep. LCPS wants to affirm radical viewpoints by engging teachers in fear of losing their jobs and students in fear of peer ostracism centered on pushing a kind of cultursl Marxism, including justifying theft and violence (as long a they’re done by the right people),” Bayard said…

she’d give more credence to her argument if she either wore her mask correctly or not at all. I don’t care what end of the spectrum you are on – if you don’t cover your nose your mask is completely ineffective and it looks foolish. ?

Wrong. Since the main function of the mask is to prevent an infected person from exhaling particles into the room, covering the mouth while speaking is probably the most important, if it’s worthwhile using a mask at all.

Conversely, if you do cover your nose, your mask is also completely ineffective, no matter how much more attractive you think it looks.

Well said, and very brave, by the teacher.

I wish I could READ what she said.