Students Demand Resignation of U. Vermont Prof Who Complained of Anti-White Campus Sentiment

Students Demand Resignation of U. Vermont Prof Who Complained of Anti-White Campus Sentiment

“not only has this ideology endured within the university, it has flourished” 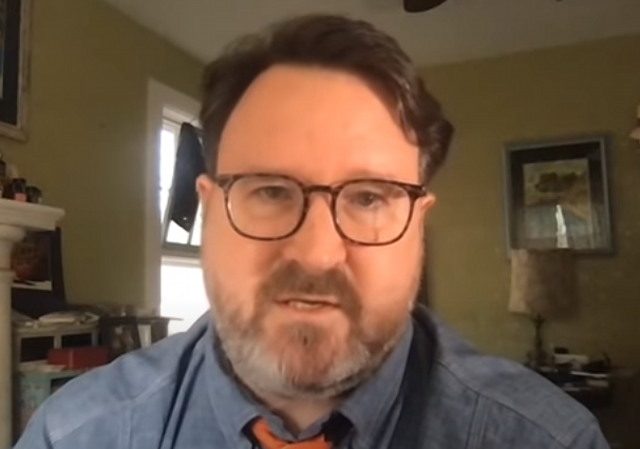 University of Vermont Professor Aaron Kindsvatter recently uploaded a video to YouTube addressing concern over what he sees happening on campus. According to Kindsvatter, who teaches counseling, anti-white sentiment is growing on campus.

Students want him to resign over this.

Kindsvatter is obviously referring to the ‘anti-racist’ and Critical Race Theory ideology which has swept through schools across the country. For the crime of questioning this, he has become a target of student activists.

University of Vermont students and faculty members are calling for the resignation of professor Aaron Kindsvatter in response to a video he posted last week, in which he claimed that he feels ostracized for being white.

On March 8, Kindsvatter, a professor of counseling in the College of Education and Social Services, uploaded the video to YouTube, titled “Racism and the Secular Religion at the University of Vermont.” In the nine-minute video, which has since received more than 15,000 views, Kindsvatter asserted that he “first heard of whiteness” when a faculty colleague “offered to help [him] with it, like it was some kind of disease,” as he put it. “It was a dehumanizing experience,” he said.

“I never expected the concept of whiteness to endure, because it’s so obviously discriminatory,” Kindsvatter continued. “But not only has this ideology endured within the university, it has flourished.” He cited a July teach-in organized by UVM’s Division of Diversity, Equity, and Inclusion, called “Turning the Conversation to Whiteness,” as an instance “in which a number of vague social ills were associated in a causal way with people of a particular race.”

A group called the ‘UVM Sisters of Color’ has launched a petition calling for Kindsvatter’s resignation:

We, select members affiliated with UVM Sisters of Color, in coalition with the greater UVM community call upon the immediate resignation of UVM Associate Professor Aaron Kindsvatter. His most recent video, “Racism and the Secular Religion at the University of Vermont” is harmful to our campus’ community of color. His demands to remove anti-racist work done by administrators on the basis that it “reduces his identity to his race” defends his privilege and denies accountability that campus groups have spent years advocating for.

Specifically, the associate professor’s qualms are with the “turning towards whiteness” teach-in, where he claims he was victimized and targeted because of his whiteness. He believes anti-racist rhetoric employed by the university was in itself discriminatory, and that it contributes to hatred fueled by hate groups.

Claims of being “suppressed” for his “moderate views” are unsavory and asinine—the first step towards any kind of progress on campus is through accountability and having honest discussions. Furthermore, the fact that you go so far as to claim notable, respected literature on anti-racist work as to cause you a sort of “spiritual sickness” is beyond comprehensible.

No extra points for spelling here. See below:

Professor Aaron Kindsvatter’s “i-don’t-see-race” mentality has been proven to be harmful towards any kind of societal racial justice and for that reason we are demanding his immediate resignation. A UVM faculty member, especially one who teaches courses in counseling, should not hold this ideology employed by white supremesists.

Professor Kindsvatter should flatly refuse to resign. Perhaps he could offer some free remedial spelling lessons to the UVM Sisters of Color.

Sisters of Color tells me all I need to know. No serious students involved.

Sisters of Color are clearly a bunch of Affirmative ingrates. I am willing to bet that they all sit far down on the left side of the black Bell Curve.

He needs to get legal counsel right now, file a preemptive lawsuit.

Yes, preemptive lawsuit. Whoever these “sisters of color” are, they understand power. But the university needs to avoid being taken over by such power politics. It is the death of academics.

U VT seems to be very far gone — from what I hear, I’ve never been there. But at least this guy needs to use his legal tools to protect his own interests.

“Sisters of color.” You beat me to it.

Expel the UVM Sisters of Color!

They need a lesson on tolerance. for dissenting opinion and diversity.

Virtually every college that chose to do so could prevent this sort of thing, and these sorts of people. How? Eliminate nonsense courses and styrofoam majors. It is just my gut feeling that the ones involved in all these “demands” and demonstrations are the ones in 6-figure loan debt for classes that will get them nowhere unless they get jobs teaching this nonsense, or end up working for a “non-profit” for a pittance.

Critical Race Theory is a race… to the bottom. While the West disassembles itself, I doubt classrooms in China and India have any place for non=productive courses.

I see out kids heading overseas for college at the rate ours are dying.

Reminds me of the old saying that “there is no such thing as food allergies in Africa.”

This kind of mugging is likely to change his political point of view, something we should capitalize on.

Four years of Navy service changed a lot of my positions and views. Most were for the better. Others were an awakening.

He says he finds the mugging surprising because U VT is a “progressive” campus. He’s got it backward of course.

These wanna-be commissars obviously do not realize that their reaction confirms his opinion.

They seem to think they cannot be made to pay a price — that their ideology is winning. And from what I can see, they are right.

Maybe “white pride” is a good slogan. It uses the lefty “pride” word, which may provide some insulation against charges of Nazi-ism or “bigotry”. It’s pathetic to have to think of such things. But they are winning, big, right now. Not all their gains will be reversed. It’s all about what can be salvaged.

What’s strange is that the most rabid “anti-racist” activists seem to live in the whitest cities in America.

The University of Vermont is in Burlington, which is really the only part of Vermont that even approaches what most would call “urban.” Yet the population of Burlington is less than five percent black. And that’s almost surely several times the percentage in Vermont overall.

My guess is that these “Sisters of Color” act as they do because they are sure they’ll have the support of all those earnest white Woke people (dare I say, especially female people?) who are students at the University.

And given that the in-state population just isn’t all that diverse, the University must strain mightily to meet even the most modest racial quotas, er, goals.

White men have a hard time understanding “white guilt” because it’s coming mostly from white women. We should put ourselves in the shoes of the women and try to understand.

What I see from that viewpoint is a population that clearly has had every single possible break for 30 years or so. Affirmative action, both explicit and implicit. Title IX upending college sports. Title IX entering the bedroom. All of it benign for them, with teeth for men that might complain. They have accumulated a debt of guilt for this string of unmitigated advantages.

And now the racial grievance folks are cashing that check, even though they aren’t the ones who have paid this particular price over the 30 years. And who pays and never gets? Guys like the one in the video.

I don’t have a solution. There’s usually not a “solution”, but there is the flow of history, aided in this case by an infinite supply of worldwide money and international competition seeking to supplant the United States.

So your saying Biden doesn’t have White Guilt? Or how about Bernie Sanders? Wokeness happens regardless of sex.

Racists, bigots, and totalitarians do not listen, do not debate, and will not stop until either you or they are destroyed. They are “True Believers” (literary reference). History confirms this. Solution: either the “Sisters” or the university must be dismantled, anything else is “a noisy gong or a clanging cymbal.”

“is harmful to our campus’ community of color.”

Alls you have to do is replace “whiteness” with “blackness” and read the sentence.

The University of Vermont and all parties, opposed to Kindsvatters’ point of view and right to speak freely, have created what is known as a hostile work environment. A hostile work environment is actionable by law. Mr. Kindsvatter needs to sue all parties involved for damages, mental stress, loss of employment and/or employability until at some future point it becomes the University of Kindsvatter.

I met a traveller from an antique land
Who said: Two vast and trunkless legs of stone
Stand in the desert. Near them, on the sand,
Half sunk, a shattered visage lies, whose frown,
And wrinkled lip, and sneer of cold command,
Tell that its sculptor well those passions read
Which yet survive, stamped on these lifeless things,
The hand that mocked them and the heart that fed:
And on the pedestal these words appear:
‘My name is Ozymandias, king of kings:
Look on my works, ye Mighty, and despair!’
Nothing beside remains. Round the decay
Of that colossal wreck, boundless and bare
The lone and level sands stretch far away.