They can only hold children for 72 hours. 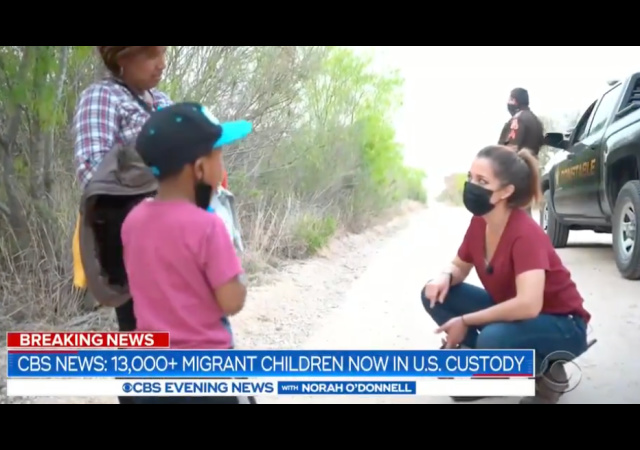 CBS News reported the Border Patrol’s backlog has 4,200 children and has held 3,000 of them past the legal limit.

About 9,000 unaccompanied children are at the Department of Health and Human Services facilities. These 4,200 children at border patrol facilities means the U.S. has over 13,000 children in custody.

Look at the wording. The CBS article lacks the word cages.

Nearly 3,000 of the unaccompanied children in Customs and Border Protection (CBP) custody had been held longer than 72 hours. CBP is legally obligated to transfer most unaccompanied minors to the Office of Refugee Resettlement (ORR), the agency which oversees shelters licensed to house children, within three days of taking them into custody.

The number of unaccompanied children in CBP custody on Sunday represents a 31% increase from early last week, when the agency was holding more than 3,200 minors. The number of children held longer than three days more than doubled.

According to the government records reviewed by CBS News, an average of 565 unaccompanied minors entered CBP custody each day during the past week.

The records show that unaccompanied minors are spending an average of 117 hours in a Border Patrol facility, which Homeland Security Secretary Alejandro Mayorkas has said “is no place for a child.”

The border patrol has children in short-term facilities built for adult males:

Children interviewed on Thursday by lawyers conducting oversight as part of a federal court case reported sleeping on the floor; being hungry; only showering once in as many as seven days; and not being able to call family members.

“One of them shared that he could only see the sun when he showered, because you can see the sun through the window,” Neha Desai, a lawyer at the National Center for Youth Law, told CBS News, citing interviews with nearly a dozen children, including an unaccompanied 8-year-old girl.

More migrants are attempting to cross into the U.S. now than in the past 20 years, @DHSgov Sec. Mayorkas said while insisting that the situation is under control.

A surge of unaccompanied migrant children is presenting the biggest challenge.@cbsmireya reports from the border pic.twitter.com/60Ohi1meoq

Just like with covid, using others to further a political agenda with no empathy for the suffering and damage they cause. It’s just theory. They never feel the pain or long term consequences when a kid commits suicide from a lockdown or child at the border is trafficked or sexually abused. These acts are cynical, and those pushing them, not to mention blaming Trump, are frauds with no heart.

(Site is working better. Only suggestion is to make some of the theme boxes at the top of some posts a bit smaller.)

Why don’t Hispanics even love their own children?

If the goal is let as many foreigners in aspossiblethen yes, everything is under control.

A while back I read about the various organizations that would ultimately house and care for these children, the salaries of the executives, the funding.

Cash cow on steroids… The money involved was mind boggling. All of that happens behind the scenes.

How many of those “children” are males who are actually over the age of 18?