Watching Dick pull and push his son Rick on the triathlon course was like being in the presence of greatness. 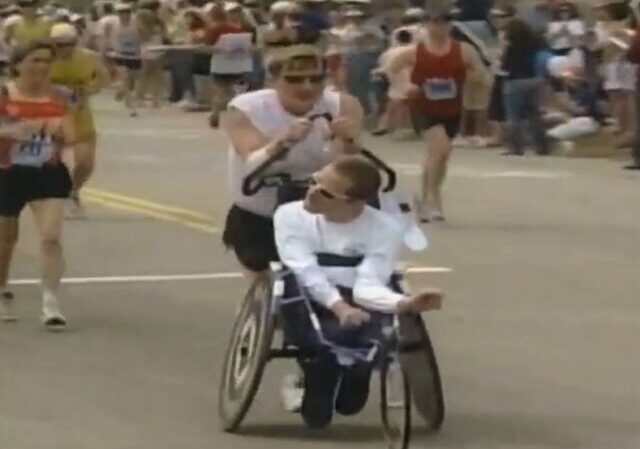 It is with great sorrow that we note the death of Dick Hoyt, marathoner and triathlete, who for over three decades inspired thousands, including me, as he competed by pulling and pushing his son Rick along with him.

In my younger days I did triathlons in New England, and Dick and Rick were there almost always. The videos show the effort, but you really had to be there to appreciate it. It was like being in the presence of greatness.

I won’t tell you whether I beat them, or they beat me. Why won’t I? Because I don’t want to and you can’t make me.

The devotion of father to son extended far beyond the sports competition.

I haven’t done triathlons since my 2006 eye illness sidelined me. But I’ve often thought about Dick and Rick, they made such an impression.

So hearing today of Dick’s death at age 80 was hard to take. I wonder what will become of his son, hopefully there is family and other arrangments have been made.

Dick Hoyt ran a 2:40 Boston Marathon pushing his son. The greatest feat in running history. They also did six Ironman Triathlons. For the swim portion, he used a rope attached to his body to pull Rick in a boat. For two miles. And then 150 miles on a bike and the 26.2 mile run. https://t.co/hzTEGbbkYW

Truly sad to hear this. Amazing man. #RIP Dick Hoyt, who ran 32 Boston Marathons while pushing his son, dies at 80
https://t.co/CayjGMfCxx from @boston25

Boston Marathon legend Dick Hoyt has died at the age of 80.

Dick and his son Rick inspired so many. I always got chills when I saw them running. pic.twitter.com/pA5FGu5teC

USA Triathlon is heartbroken to learn of the passing of Dick Hoyt. Hoyt was an endurance sports icon, a Boston Marathon and Kona legend and a USA Triathlon Hall of Famer. More importantly, he was a tremendous father and a beloved member of our community. May he rest in peace. pic.twitter.com/SDRZTcDb7D

We are deeply saddened by the passing of Dick Hoyt.

For decades Team Hoyt has exemplified perseverance, love, and compassion, as Boston Marathon icons and as a family.

We send our thoughts to the entire Hoyt family. They will forever be an inspiration. ?? pic.twitter.com/5SXVX4V7ce

I understand the pain of having a child who cannot spread their wings and prosper, I have one.

The dude was a class A example of what a father should be. A true motivator. His example will live on.

This man was/is an inspiration. I live outside Boston and remember watching him push his son in the early 80’s, it was an incredible feat. Later my family moved to Kona when a sister called to tell me they were there doing the Ironman, I was not shocked. I started running at 50 and whenever I wanted to quit, I’d always think of these men……God rest his sole and watch over his son.

It was always a magical moment at the Boston Marathon when Dick and Rick would go running by. One could hear the crowd noise start to swell as they approached and then fade away as they moved out of sight. It was like a giant wave of joy, inspiration and awe.

Thanks for writing about them Professor.

Two takes on this. One, these endurance events are brutally demanding and require people with exceptional abilities to push through pain. The mental part of it cannot be adequately understood until we do it ourselves. I can’t wrap my head around a 2:40 Boston marathon while pushing another person ahead of me. It’s astounding. At 68, I haven’t given up on qualifying for Boston yet. It’s stories like these, and there are many of them in this sport, that keep me going.

Two, I had no idea that your were once a triathlete Professor. I’m very impressed.

He will be missed. I live a bit south of his area, but always heard about their accomplishments. I competed in the Hoyt Triathlon in a Holland, Ma and met them both, it was truly inspirational.

I have seen them at many a race. A true inspiration. I could pass them on the bike, but they always passed me on the run!

RIP Dick. Short of our Father in Heaven you are what we should aspire to.

I have a couple kids with disabilities so about 10-15 years ago my wife started a foundation to get an all inclusive playground built for our community. The first fundraiser we held Dick Hoyt was the guest speaker and I had a chance to show him around and spend some time with him. An awesome and inspirational man that truly left an incredible legacy and will be greatly missed.

A video of the results of that first fund raiser all those years ago!
https://www.youtube.com/watch?v=8raxJN2HkM0

I watched the video, thanks for posting, beautiful story

I had the honor of seeing them several times at the Ironman Triathlon in Penticton. I was always amazed and inspired. It was awesome to see the pure joy on Rick’s face as they crossed the finish line.