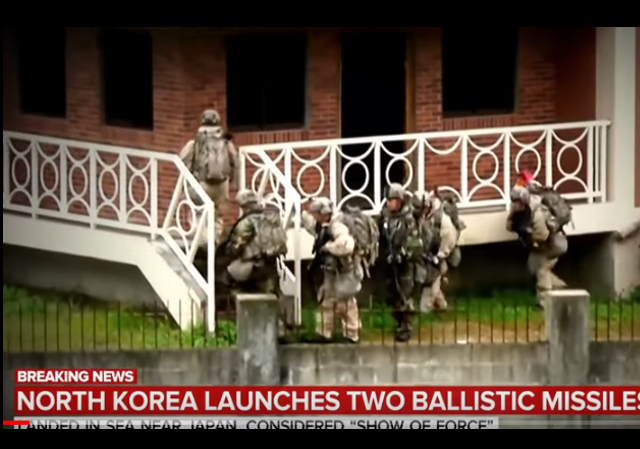 North Korean officials have claimed the missiles it launched earlier this week were a “new-type tactical guided projectile” in its first statement since the test.

It was the country’s first ballistic launch in almost a year and the first since Joe Biden became US President.

Mr Biden has said the US will “respond accordingly”. The US, Japan and South Korea have condemned the tests.

The North Koreans warn that Biden should not have criticized the test.

North Korea on Saturday accused U.S. President Joe Biden of “provocation” for criticizing its recent missile launches, claiming the firings are an exercise of its self-defense right and warning the U.S. will face “something that is not good” if such “thoughtless remarks” continue.

Ri Pyong-chol, vice chairman of the Central Committee of the Workers’ Party, made the statement, a day after Biden said the North’s launch of two short-range ballistic missiles Thursday was in violation of U.N. Security Council resolutions.

“We express our deep apprehension over the U.S. chief executive faulting the regular testfire, exercise of our state’s right to self-defense, as the violation of UN “resolutions” and openly revealing his deep-seated hostility toward the DPRK,” Ri said.

“Such remarks from the U.S. president are an undisguised encroachment on our state’s right to self-defense and provocation to it,” he said in the statement carried by the official Korean Central News Agency.

The current administration is carrying on exactly as you would expect.

As for the Pentagon, officials familiar with the discussions say military leaders have no immediate plans to respond or escalate — whether it’s by stepping up joint military exercises with South Korea or by raising the U.S. alert status in the region.

And while Biden said the tests violated U.N. Resolution 1718 and promised to “respond accordingly” to any escalation, he also left the door open to diplomacy.

That may be tricky, after top North Korean leaders rejected repeated outreach attempts from the Biden team, and issued fiery warnings last week urging Washington to refrain from “causing a stink.

Kim Jong Un must be getting nervous now, as a UN sanctions committee called for a panel of experts to investigate North Korea’s latest missile launch.

The latest expert report in February said Pyongyang is modernizing its arsenal of nuclear weapons and ballistic missiles by evading UN sanctions and using cyberattacks to finance its weapons programs.

The new resolution calls for UN experts to present an interim report by August 3 and a full and final report by January 28, 2022.

China’s two puppets are having a fight?

Is this a distraction? Is something happening in Hong Kong or Xinjiang?

They are Democrats. We’ll be in some war or another within the next few months.

Yes, but if I had to bet money I would say that the Pentagon will decide that the next war will be a counter-insurgency against “white nationalists” – to be fought on US soil.

But given how badly the Pentagon f-ed up in Afghanistan and Iraq they will probably end up losing this one as well.

Grumman and Northrup and Raytheon don’t get the big bucks for slapping down Boog Bois in Boise.. There will be a war with somewhere far enough away so that we can safely use all the napalm, bunker busters, and Hellfire missiles we want, without threatening a single Gap, Pottery Barn, or Starbucks.

Look to the power of the word “and”.

Yes, but overseas is not where the Pentagon’s heart can be found. The generals have made it painfully clear that they regard the real enemy to be Red State Americans.

Besides – if you listen to the State Department the Islamofascists are the Good Guys, er, Good Non-Specific Gendered Persons.

Ah, but it’s precisely the power of the word “and” that is going to make all the difference here. Once the Pentagon gets embroiled overseas, droning the Boog Bois suddenly becomes “fighting a war on two fronts.” And we all know the wisdom of that. And that may work out to our advantage.

And the Biden-Harris Crime Syndicate will profit handsomely.

Get ready for non-stop distractions as these bumbling idiots that stole the election flounder like flopping fish.

The bumbling idiots didn’t steal anything. In Biden’s case, it was the FBI/CIA/Swamp dark forces. In Harris’ case, it was the Soros/leftist contingent. It was a group effort, and it worked.

“As for the Pentagon, officials familiar with the discussions say military leaders have no immediate plans to respond or escalate — whether it’s by stepping up joint military exercises with South Korea or by raising the U.S. alert status in the region.”

But of course. The Pentagon is too busy searching for the legions if “white supremacists” that lurk under their beds, or planning for the joyous day when they can launch the often-promised-but-not-yet-delivered counter-insurgency campaign against US citizens.

The good news is that if the Pentagon screws up the military campaign against US citizens as badly as they did in Afghanistan and Iraq, the Deplorables will end up controlling most of the country. Nearly seven decades of failure prove the Pentagon no longer knows how to win wars, so Lloyd Austin’s wet dream of waging genocide against “white nationalists” will likely also fail.

“The North Koreans warn that Biden should not have criticized the test… warning the U.S. will face “something that is not good” if such “thoughtless remarks” continue.”

The group behind “Big Brother” is hurriedly rushing a new reality show into production called “Bitch-Slap The Leader of The Free World.”

A little more of this, and the UN will have to call on Hans Blix to write a letter to NK expressing how angry the UN is, just like he did with Lil Kim’s father.

North Korea: for Chistmas, we as you to nuke D.C. Honest – we won’t hold it against you.