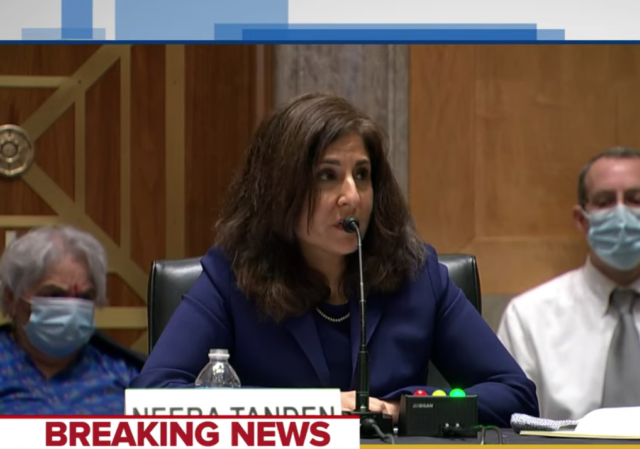 It’s official. Tanden is out. Tanden’s nomination was dead in the water without the support of Sen. Manchin.

The person in Biden’s ear said they “looked forward to having her serve in a role” in the administration, just not this one.

Neera Tanden, President Biden’s controversial nominee to head the Office of Management and Budget, has withdrawn her nomination. Biden said in a statement Tuesday he had accepted her request.

“I have the utmost respect for her record of accomplishment, her experience and her counsel, and I look forward to having her serve in a role in my Administration,” Biden said. “She will bring valuable perspective and insight to our work.”

It had become increasingly clear that Tanden’s nomination was in trouble after multiple key senators said they wouldn’t support her, citing her tweets criticizing some members of Congress. Sen. Joe Manchin, D-W.V., was the most significant opponent. Without his support, Tanden needed to find a Republican to support her in the equally divided Senate.

Tanden, in her withdrawal letter to the president, wrote that she was grateful for the White House’s support but did not want controversy surrounding her nomination to become a “distraction” from his administration’s work.

Tanden’s failed nomination brought about a rare moment of unity from the left and right. The Republicans didn’t like her numerous tweeted, and frankly witless and childish, insults fired off at them. Sen. Bernie Sanders, the ideological heart of today’s Democratic Party, doesn’t think she’s far-left enough. She also punched a Sanderista. Allegedly.

Sanders supporters have long had a problem with Tanden, who was accused of punching his 2000 campaign manager in the chest when he worked the progressive news website ThinkProgress. Leaked emails from WikiLeaks also showed that Tanden had called ThinkProgress staffers “crazy leftists” in a series of emails.

To be fair, she wasn’t wrong about that. The “think” in ThinkProgress was always more of an aspiration than a fact.

Dirtbag. Though bigger dirtbags – like Susan Rice – remain in very powerful positions in the White House, behind the scenes.

Doesn’t matter. The next nominee will be just as radical and just better at lying about it until they get confirmed by the usual suspects among the RINOs.

True, she very well may have the one of the sacrificial lambs. Now the pressure will be turned up on the Manchin’s, et al. to vote for the next, even more radical/progressive nominee.

What a foolish, childlike person. She found it more important to satisfy her self-indulgent disdain for others than to manage herself in a way to further her ideas and goals. While I’m grateful for her immaturity, she is a horrible example for us all. I’m aware that I’m following in her footsteps merely by posting this, but I’m not seeking a position of leadership. Been there, done that and retired. Now, I can freely indulge my immaturity. 🙂

She was from the Hillary side, I recall seeing her name quite a bit in Hillary’s emails leaked in 2016.