Authorities nabbed three men from Yemen and one from Serbia. 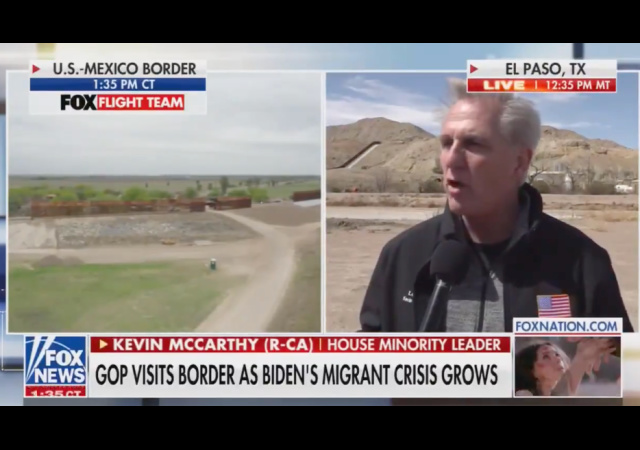 House Minority Leader Kevin McCarthy told reporters the border patrol agents he met warned him about “suspected terrorists are trying to cross into the United States via Mexico.”

The left went crazy, calling McCarthy a liar or laughing at him. Rep. Reuben Gallego (D-AZ) tweeted that as the chairman of the subcommittee on Intelligence and Special Operations he never heard of this news.

Gallego retweeted Aaron Rupar, who we all know as the most honest journalist ever to exist (sarcasm). Others tried to tear down McCarthy.

Weird as the Chairman of the subcommittee on Intelligence and Special Operations and a border state member of Congress haven’t heard anything about this. Gonna ask for a briefing. Pretty sure he is either wrong or lying. https://t.co/retrzeUPxV

McCarthy is echoing the same unsubstantiated rhetoric employed by Trump and his allies. There's virtually no evidence to support the notion that jihadists are coming into the US via Mexico. https://t.co/O9WDFyQnr2

They now have eggs on their faces.

It’s more embarrassing for Gallego because he should know everything in this Axios report:

The Customs and Border Protection agency confirmed to Congress today that four people arrested at the southern border since Oct. 1 match names on the FBI’s Terrorist Screening Database, a congressional aide briefed on the correspondence told Axios.

Why it matters: Three of the people arrested were from Yemen and one was from Serbia. The four arrests are more than the number of similar people taken into custody during recent full fiscal years, according to the source. In fiscal 2018, six people from Yemen and Bangladesh were arrested.

Axios tried to make it seem like its scoop is not a big deal. The article noted that most of the migrants from Central America and Mexico, McCarthy did not provide a specific number, and the FBI has a long watchlist.

Does that matter? It should not matter. McCarthy did not lie. The arrests show we have decent border security. Or had. It doesn’t look that well now.

At least McCarthy is at the border. President Joe Biden said he would not visit.

Can’t get enough of those “Biden cages”

CBS News reported Tuesday that there are now more than 13,000 unaccompanied migrant children being held in prison like cells by US authorities

Not a new issue (terrorists & other ne’er do wells crossing our southern border) but it’s one I wish the powers that be in DC would take more seriously. It’s really sickening what they’ll look the other way on so long as they can remain in office. Their ragging on McCarthy says a lot about them and their unwillingness to address the issue.

The powers that cheated themselves into the top ranks of our government are NOT wanting to see America do well. They thirst for the destruction of our formerly great country if truth be told. The plan is for us to become something more like Russia when Stalin took over, or China when Mao became more than a king, or Cuba when Castro brought his own brand of power/Communism.

These gargoyles have made that very clear.

Why do I get the feeling that where the FBI is concerned NOTHING is as it seems? This is the same outfit that butchered innocent people at Waco and Ruby Ridge, instigated the illegal surveillance of members of the Trump campaign, that continues to turn a blind eye towards terrorist organizations like Antifa and BLM, and who know what else. Since when are they interested in actual law enforcement and national security?

So a lifelong Swamp creature like McCarthy gets to crow about some suspects the FBI claims they caught. Feel the excitement. Kevin and his BFF Liz Cheney can fundraiser all they want off of this bone the American KGB tossed them. Our constitutional republic ceased to exist on January 20, and McCarthy and his party were accomplices with the Communists in its murder. Right now that a vastly more pressing problem than Islamofascism.

Those weren’t terrorists – they were potential Demoncratic voters.

This has been a problem for a very long time. It’s the reason I stopped supporting open borders 19.5 years ago.

So, Congressman Gallego, Rep. McCarthy was neither wrong nor lying, but you were either ignorant about something you should have known about or lying. Have I summed that up correctly?

He was pulling the same nonsense Schiff pulled over the Russia hoax, using his committee position to imply that he was in possession of information that contradicted Nunes; of course now we know that he was lying, but at the time there was no proof so the reporting industry ran with it.

Fuck McCarthy. This is nothing but a RINO failure theatre photo op.

The sack of crap didn’t go to the border once when they actually had the power to do anything, and actively fought Trump’s efforts.

I’m pretty sure that it was not the FBI themselves who caught those on the terrorist watch list. I am even surer that the FBI is probably planning to punish those line grunts who actually captured them. After all, in this regime the more terrorists attacking Americans, the better.

Emigration reform to mitigate progress of [catastrophic] [anthropogenic] immigration reform and collateral damage at both ends of the bridge and throughout. #HateLovesAbortion