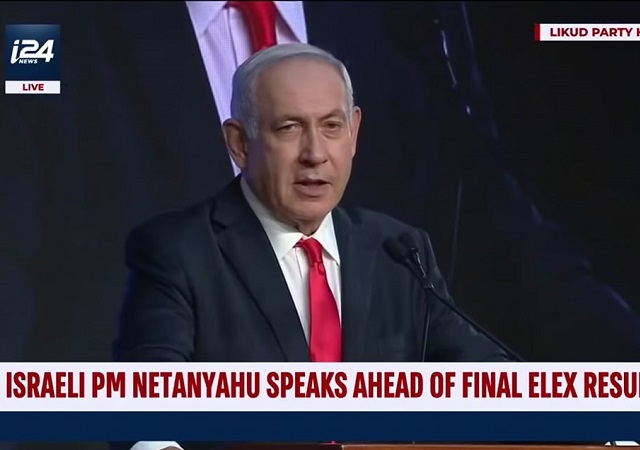 After Prime Minister Benjamin Netanyahu’s rivals dragged Israelis through four general elections in two years, the final result of the March 23 vote has ended in yet another deadlock.

As the Israeli election authority releases the final tally, Netanyahu appears to have fallen short of the 61-seat majority needed to form the government.

The anti-Netanyahu bloc has cemented its lead as counting comes to a close. The prime minister and his allies won 52 seats, as the rival left-wing alliance secured 57 in a 120 member Knesset.

The Central Elections Committee completed the process of counting all the votes cast in Tuesday’s election on Thursday afternoon, a committee spokeswoman announced.

The spokeswoman said it would now take time to verify the counting and to upload the new numbers to the system.

But Channel 12 reported that there were no new changes in the mandates of the parties since Thursday morning, and Prime Minister Benjamin Netanyahu’s camp with Yamina remained at 59 seats.

Some commenters have speculated the Arab-Islamic Ra’am helping the Netanyahu bloc cross the 61-seat threshold. The party has indicated its desire to play the kingmaker.

Israel’s longest-serving prime minister still has a few paths open to form the next government, the media argues. “Netanyahu could still form a coalition and secure a sixth term in office, but that would require enlisting the Islamist party Ra’am and convincing his right-wing allies to accept this,” the Israel Hayom newspaper noted as the final results poured in.

The inclusion of Naftali Bennett’s right-wing Yamina party’s seven seats could take Netanyahu’s tally to 59, two short of the majority. But the former Netanyahu ally has so far refused to commit to any bloc.

On the other hand, Netanyahu has refused to take support from the Islamist Ra’am and other extremist Arab parties. “They represent parties that oppose the State of Israel,” he asserted two weeks ago.

A minority government of the anti-Netanyahu bloc, at the mercy of right-wing Yamina or Arab-Islamist Ra’am, will probably cause the most unstable coalition in Israel’s history.

It will be too premature for his rivals to write Netanyahu off — a politician who has seen more rough and tumble politics than any of his rivals. A handful of defectors from the rival bloc could change the electoral landscape. During the campaign, Netanyahu had indicated the possibility of a few lawmakers from the opposing camp crossing over the aisle to back him.

If Israel is intent on following the US example of committing suicide, who are we to stop them?

Theirs is a slightly different vision of suicide – the prospect not of subjugation, but annihilation.

Many of us would prefer annihilation to subjugation. I’d rather die on my feet than live on my knees.

Israelis have gone too long without a war and have been relatively isolated from terrorism. That’s the problem. They’ve become too relaxed. Not as much as Americans, but enough so that they can’t see the grave and existential danger that awaits them if they abandon Bibi.

Nothing will happen if they dump Bibi, so long as it’s not for a leftist, or a feckless twit like Lapid. Bibi is not this savior you seem to imagine him to be. Through his entire career he has been a squish, masquerading as a right-winger only when it suits him. His only principle is his own survival, and in order to achieve that he will adopt whatever policies he needs to. In the past two years alone he has handed over the economy to socialists such as Kahlon and Nissenkern, and now he has Tzachi Hanegbi sounding out the notion of forming a government that depends on Ra’am’s continued good will, something he harshly condemned his opponents for contemplating two elections ago.

The only real solution seems to be for the Likud to dump Netanyahu, bring Sa’ar and his people back into the fold, and elect a new leader. It would help if Lieberman were to quit the scene too; he has made it toxic for the last few years and without him his party can rejoin the right.

Bibi has brought Israel unprecedented financial prosperity. Bibi has brought Israel an unprecedented era of safety. Bibi navigated Israel through the Obama years—when the likes of Sa’ar would have buckled in short course. Bibi has, with Trump, brought more peace (and of actual substance) with Arab countries than any previous leader. Bibi has bolstered Israel’s reputation more than any Israeli leader. These are the facts.

So if Bibi also wants to “survive”—like ANY politician—then god willing he will survive.

Bibi was good as Treasurer, and as foreign minister. He’s not been so good as prime minister, and in the last few years since the bogus indictments he’s been all about himself.

Just remember who gave Hevron away in the first place. And who released over 1000 bloodthirsty murderers in exchange for Shalit, knowing that he was sentencing dozens if not hundreds of people to death. And who enabled the disastrous withdrawal from Gaza, supporting it at every key vote, and publicly denouncing it literally the moment it was too late to stop it. That timing was no accident; it was a typical Bibi maneuver, make sure it happens and then take credit for opposing it.

Donald Trump should call up his opposition and offer congratulations ASAP.

Which opposition? Lapid? Lieberman, who started this whole mess? Gantz? Sa’ar? Bennett? Abbas? There isn’t one opposition. Literally the only thing his opponents agree on is that he has to go. If they were to form a coalition for the purpose of unseating him, it would fall apart five minutes after it achieved that purpose; the Likud would elect a new leader and he or she would easily put together a large coalition.

Oh Joy, The 5th Election within 2 years within the next 6 months. The people are fed up with the politicians and are NOT Voting.
Likud angry as 300,000 voters stay home https://www.israelnationalnews.com/News/News.aspx/299228
This is not working. We have not had a State Budget in 3 years. Yes, the reason that we have had so many elections is because the Budget has not been passed by the Knesset!

So what’s the alternative? Other than Bibi voluntarily moving on, or the opposition putting together a temporary majority just to oust him, what solution is there?

The basic problem is the people, who refuse ever chance they’re given to elect sensible people. Remember the first election in this series, when the polls were giving Zehut as many as 10 seats, and Bayit Yehudi and Yamina were expected to get at least 6 each? That would have been great, but look what happened instead. And who the ***** keeps voting for Lieberman?