Don’t be surprised when people like Duckworth and Hirono pull these stunts. You get this when you revolve your platform around identity politics. 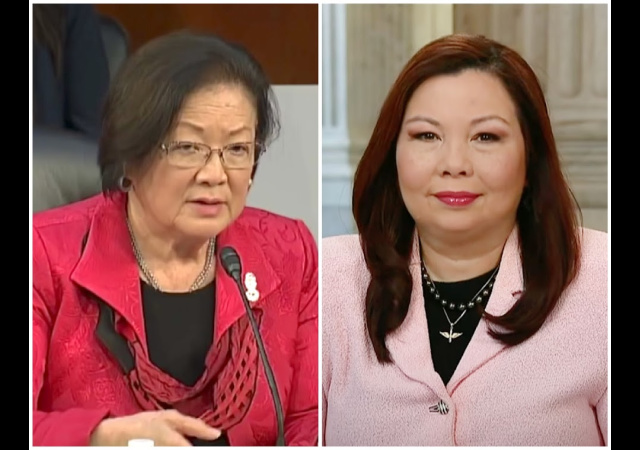 Sens. Tammy Duckworth (IL) and Mazie Hirono (HI) said they would object to future Cabinet appointments by President Joe Biden if he did not nominate more Asian Americans and Pacific Islanders (AAPI).

I believe we call that racism when a person prefers a race over others.

Hirono backed up Duckworth, saying she “would like to have a commitment from the White House that there be more diversity representation in the Cabinet and in senior White House positions.”

Don’t be surprised when people like Duckworth and Hirono pull these stunts. You get this when you revolve your platform around identity politics.

The White House announced Biden would add a senior AAPI liaison. Duckworth’s office said she “appreciates the Biden administration’s assurances that it will do much more to elevate AAPI voices.”

Based on the private conversation we had, I will continue voting to confirm the historic and highly qualified nominees President Biden has appointed to serve in his administration.

Do you know what is incredibly insulting? Being hired based on anything other than my hard work and qualifications.

Hirono and Duckworth were insulted when the White House pointed out Vice President Kamala Harris’s heritage. Harris is half Pacific Islander. You know, just like Duckworth. Her mother is Thai of Chinese descent. Her father is American. He traced his roots back to the Revolutionary War.

Blue-on-Blue … so what if they are Occidentalphobic

If they were white, they’d be racist.

They are protected species, so are Down With the Struggle (reg US pat off)

Apparently no more judging people by the content of their character instead of the color of their skin. At some point – likely soon – MLK’s “I Have a Dream” speech will be censored and anyone who quotes it cancelled as a “white supremacist”.

This will be so much better than that archaic “most qualified person in the eyes of the employer gets the job” foolishness.

The handlers had to wake up Duckworthless out of her coma – Tammy is up for re-election and will actually be challenged in the Primary and General election.

Those two sold themselves out for less than a street corner hooker. They should of held out for more than some liason.

Your disrespect for street hookers, corner and mid-block, is appalling. Go to your room.

What I want to know is where Hirono stands on giving the islands back to the indigenous people they were taken from.

if people keep moving there it will just tip over, at least that is what Hank Johnson thinks

Someone should ask Dumb A** Duckworth if she refused medical treatment after her helicopter was shot down because there weren’t enough Asians and Pacific Islanders on the medical team that saved her life.

Sure it’s racist, but when the left employs racism to eat others on the left, I have to wash my hair that night.

Harris is half Pacific Islander.

Um, no, she isn’t. She’s half Indian and half black. No Pacific Islander in there at all, as far as anyone knows.