Will Republicans have the guts to go after the Biden appellate court nominees to prevent SCOTUS grooming the way Democrats went after Miguel Estrada? 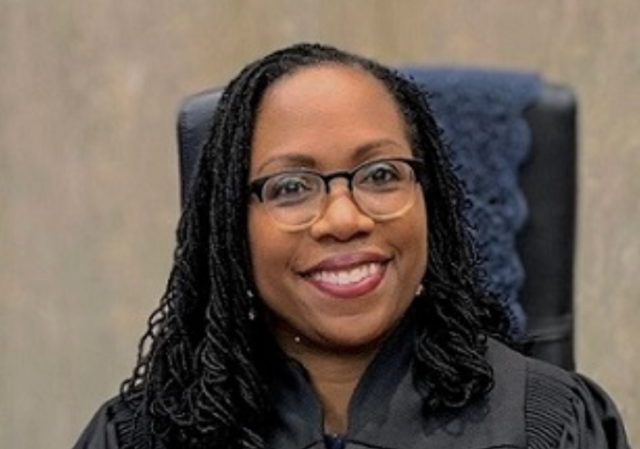 What do you need to know about them? Well, according to Biden’s announcement tweet, they check a lot of boxes. A lot. 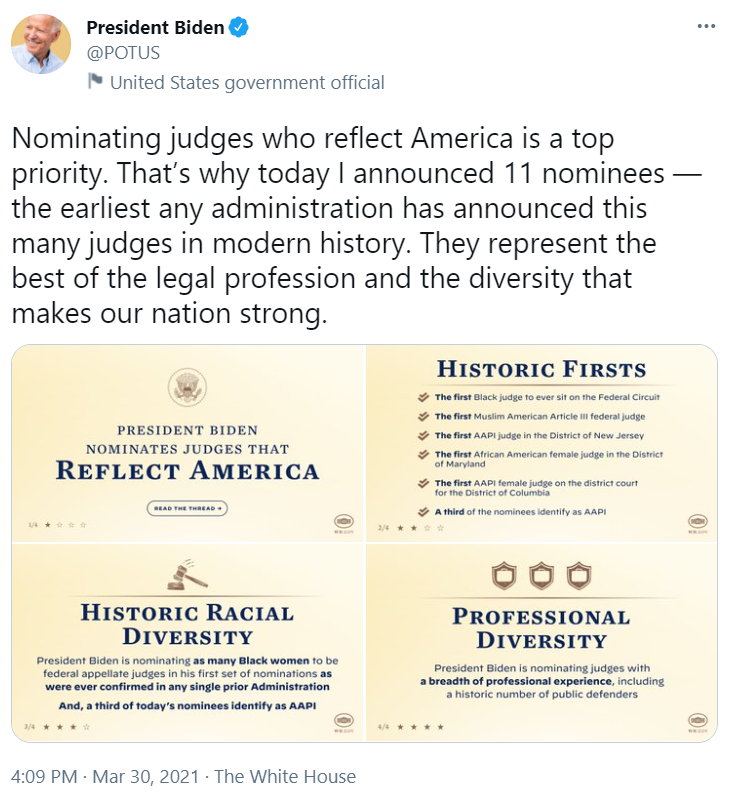 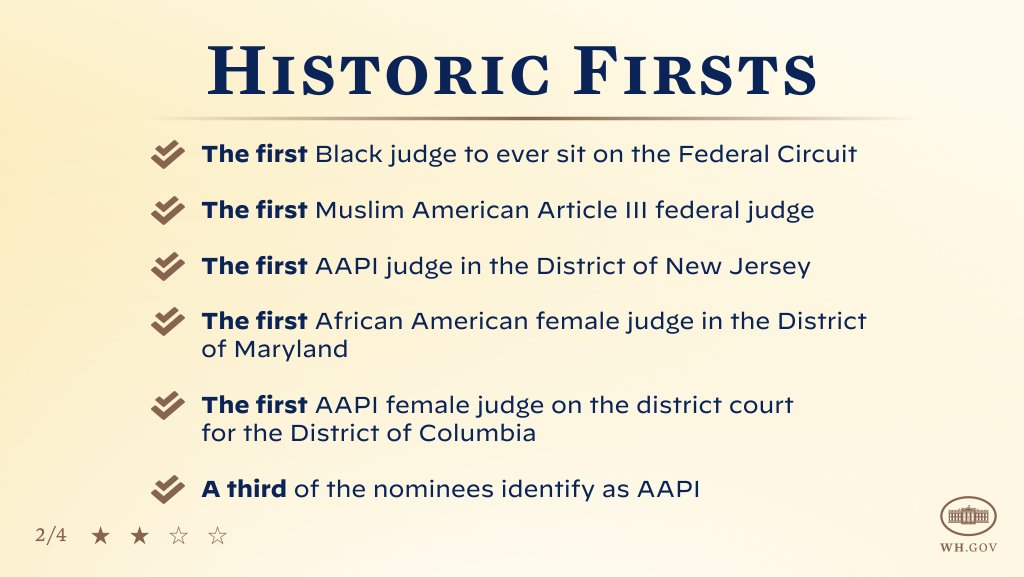 You can read about the Judges at the White House website, but Carrie Severino tells you what you need to know — the list is payback to far left activist groups.

President Biden has announced his first tranche of judicial nominees and as I explained on @FoxFriendsFirst this morning, it's payback time.

That is, payback time for the left-wing dark money groups that spent millions to elect him and Senate Democrats. pic.twitter.com/u8iy23Qw27

The three appeals court nominees are all black women.

— Judge Ketanji Brown Jackson, 50, for the U.S. Court of Appeals for the District of Columbia Circuit. Jackson, who is Black, would fill the vacancy created by Judge Merrick Garland’s move to lead the Justice Department. She has served on the U.S. District Court for the District of Columbia since 2013. President Barack Obama had considered Jackson for the U.S. Supreme Court in 2016. Biden has promised to nominate a Black woman for the high court if he has the opportunity to do so.

— Tiffany Cunningham, 44, for the U.S. Court of Appeals for the Federal Circuit. Cunningham, who is Black, has been a partner at Perkins Coie LLP in Chicago since 2014. She serves as trial and appellate counsel for large multinational companies, as well as small enterprises, and individuals in complex patent and trade secret disputes.

— Candace Jackson-Akiwumi, 41, for the 7th U.S. Circuit Court of Appeals. Jackson-Akiwumi, who is Black, is a partner at Zuckerman Spaeder, LLP in Washington, where she focuses on complex civil litigation, white-collar criminal defense and investigations. From 2010 to 2020, Jackson-Akiwumi worked as a staff attorney at the Federal Defender Program in the Northern District of Illinois.

Getting these nominees appellate court experience is viewed as building their resumes for an eventual Supreme Court nomination, since Biden has promised to nominate a black woman for the next vacancy (I’m expecting Breyer to retire when the term ends in June).

The marquee nominee is Brown Jackson, who is being nominated for the D.C. Circuit Court of Appeals. Severino has a profile of Brown Jackson at National Review:

Jackson has been on the Supreme Court short list of Demand Justice, to which prospects do not make the cut unless they are far to the left. Demand Justice is part of the Arabella Advisors network.

Over the next three years, she returned to private practice, working as an associate on mostly civil matters at Goodwin Procter and then The Feinberg Group. Her work shifted to criminal law in 2003, when she joined the staff of the United States Sentencing Commission as an assistant special counsel.

From 2005 to 2007, Jackson served as an assistant public defender in the Federal Public Defender’s Office.  In that capacity, she represented indigent criminal appellants before the D.C. Circuit. She remained there until 2007, when she joined Morrison & Foerster as of counsel. Her practice there consisted primarily of appellate work, which included amicus briefs on behalf of accused enemy combatants in military detention.

Jackson donated to the Obama campaign and was appointed in 2010 to be a commissioner and vice-chair of the United States Sentencing Commission. She served in that capacity for three years before President Obama appointed her to the D.C. district court. She is married and has two daughters.

So there you go.

Will Republicans have the guts to go after the Biden appellate court nominees to prevent SCOTUS grooming the way Democrats went after Miguel Estrada?

Likely? I’d say inevitable. Once they talk Breyer into retiring.

I supported Trump, and there is no question he won the 2020 presidential election by a hefty margin. But Gorsuch, Kavanaugh and ACB were rather embarrassing own-goals.

In fairness Trump had no choice but to trust McConnell to get anything done in the Senate. But in hindsight that would be like General Eisenhower relying Alfred Jodl to carry out the D-Day invasion. McConnell is loyal only to the woke international corporations – and not the Constitution or Deplorables like you and me.

So here is a little thought experiment: if the Trump SC picks were replaced by the three Communist judges profiled in the article, who could tell the difference?

The list of “Historic Firsts” is just plain sad.

Oh, that is soooo white!

Right. The “woke” definition of racism and white supremacy intersect at only being propagated by white people. The very same actions only reversing the races of the victim and “guilty” are called racial justice.
Like advancing in the world of work, it used to be based on the merits of the candidate. Now, it’s based almost 100% on the color of the skin without regard to the content of the character. MLK must be spinning in his grave to know that what he fought so aggressively to eliminate has returned in reverse. Wonder how many “woke” people actively seek out medical treatment from doctors who only got to college and medical school on “allotments” for race rather than on qualifications for entrance? They should only be seen by those doctors, dentists, surgeons and other medical professionals!

She better hope they don’t find a Gay Black Female Judge somewhere. Or, she will be pushed out for someone with more Woke points.

America!
First in flight!
First in communications!
First in automotive transportation!
First in nuclear physics!
First on the moon!
First with the Internet!
And now, first African-American female judge in the District of Maryland!
Just one earth-shaking accomplishment after another!
Murica! F*, Yeah!

After Biden gets through, Sonia Sotomayor will look like a legal genius.

Naw. When it comes to vapid, sanctimonious legal thinking the Wise Latina has probably retired the trophy.

But she won’t be alone at the bottom anymore. So there’s that.

ENOUGH of the “firsts”! How about some “competents”?

In what we have seen since the election, what basis is there to assume that the current court is different from a Biden appointed court?

Would they need 2/3 to add a seat to SCOTUS at this point?…no vacancies.

I am affiliated with an organization that, in 2014, filed a Freedom of Information Act (FOIA) lawsuit in the DC district. Judge Jackson was assigned. We waited & waited & made carefully circumspect inquiry after inquiry. Finally, in Nov. 2019 we pushed hard for a decision, which was issued within a few weeks, in Dec. 2019. It took 5.5 years to come up with a summary judgement for the government agency that simply copied arguments in their briefs . Her decision read as though she had not even read our briefs. During our long wait, we learned that Judge Jackson has developed a reputation for procrastination & slow work, especially on cases that are not high profile. We appealed her decision. Oral arguments were in Dec. 2020. The 3 judges asked excellent, to-the-point questions that made it clear that each of the 3 read our briefs.. We hope to see the decision soon.

But procrastination & slow work is what affirmative action is all about.

It’s not affirmative action, which aids people to recognize, perhaps realize, opportunity. They are practicing affirmative discrimination based on race, sex, etc. That is racism, sexism, or, generally, diversity [dogma] (Pro-Choice religion).

deadlines and hard work are tools of white supremacy…what’s your hurry anyways? It’s not like time, money, lives, and freedoms are on the line in a courtroom?

Appointing a conservative black woman is the way to go, to restore the reputation of black judges. This woman is going the opposite way, the “Well, what can you do, it’s a black woman” direction.

Here is the opportunity for McConnell & Co. to demonstrate how deep their commitment to seating conservative judges really was. He knows / they know all the tricks the minority can use to gum up the works; he /they watched the scummy obstructionism the Dems used. Will they do the same? Or will they just toss in the towel “Oh well, the nominee will probably get seated anyway.”

“First Black judge to ever sit on the Federal circuit”? What does that mean? Or is that just wrong? I’m pretty sure there have been others.

I eagerly await the nomination of America’s first vegan, left handed, albino transgender, Muslim jurist. For Biden et al, its not about the best, it’s all about the “word salad” first. God save the Republic.

Something to watch out for when it comes to these judicial nominees: Their ages. Trump nominated and the Senate confirmed a lot of judges to the district and circuit courts who were under the age of 50, including a good number in their late 30s and early 40s. The Democrats were not happy at all, but it looks like the Biden people have decided that isn’t a bad idea.