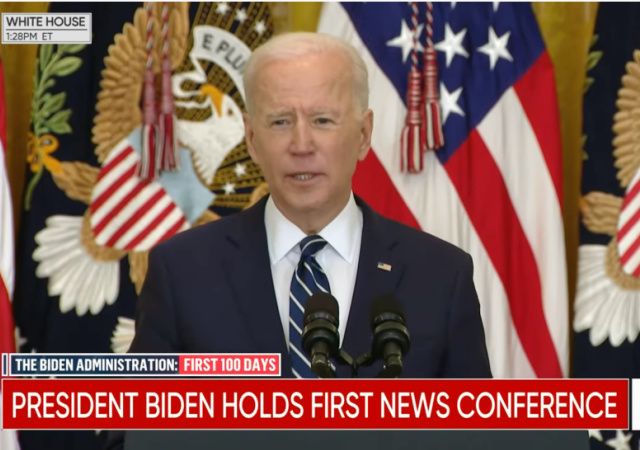 Georgia was at the center of a storm of controversy concerning election integrity following the 2020 presidential election. In an attempt to regain its citizens’ confidence in elections, Georgia passed—and Governor Brian Kemp signed into law—the Election Integrity Act of 2021.

The new reforms, according to Heritage Action, include the following:

People on the right look at this Georgia law and are appalled that such common sense rules were not already in place.

We're more than happy to #FactCheck the Senator and help him understand why SB 202 makes it easier to vote but harder to cheat.

Currently, state law only requires ONE Saturday of early voting. But SB202 requires TWO Saturdays – and allows counties to do TWO Sundays.

This would allow 116 counties will have MORE hours of early voting.

People on the left, up to and including Joe Biden, look at this and screech “Jim Crow!”.

President Biden on Friday called a new Georgia election law “Jim Crow in the 21st century,” likening its provisions to racially discriminatory laws cast aside in the 1960s.

The reforms passed by Republicans and signed Thursday by GOP Gov. Brian Kemp impose new rules on absentee voting — including requiring a photo ID and shortening the absentee voting window — in addition to other changes that conservatives say will improve election integrity.

Democrats allege that the bill will constrict voting, particularly among poorer and African American voters, who helped Biden carry the state in November by fewer than 12,000 votes. Democrats also narrowly won a pair of Senate runoff races in January, giving the party effective control of the upper chamber of Congress.

“More Americans voted in the 2020 elections than any election in our nation’s history. In Georgia we saw this most historic demonstration of the power of the vote twice — in November and then again in the runoff election for the U.S. Senate seats in January. Recount after recount and court case after court case upheld the integrity and outcome of a clearly free, fair, and secure democratic process,” Biden said in a statement.

“Yet instead of celebrating the rights of all Georgians to vote or winning campaigns on the merits of their ideas, Republicans in the state instead rushed through an un-American law to deny people the right to vote.”

Biden continued: “Among the outrageous parts of this new state law, it ends voting hours early so working people can’t cast their vote after their shift is over. It adds rigid restrictions on casting absentee ballots that will effectively deny the right to vote to countless voters. And it makes it a crime to provide water to voters while they wait in line — lines Republican officials themselves have created by reducing the number of polling sites across the state, disproportionately in Black neighborhoods.”

Like Republicans being “literally Nazis” and white people being born and then bred racists because they are born white and white privilege and systemic racism and stuff, this Jim Crow smear of anything with which the left disagrees is met with the eye rolls and raised eyebrows of the center and center-right, with the disgust and disdain of the right, and with the slathering bobble-headed-nodding devotion of the increasingly ludicrous left.

One might imagine that Biden, who claimed in his disastrous first presser since becoming president that he “came to the US Senate 120 years ago,” would be more well-versed in the long-abandoned Jim Crow laws.  One would be, obviously, wrong.

In fact, Democrats, starting with Biden, appear to be positioning to use the Georgia voting integrity law to pass their dream package of anti-American voting ‘reforms’ that will have the opposite effect of the Georgia law; the Democrats’ wishlist will undermine election integrity, undermine American confidence in elections, and yes, even, to use their own inaccurate term to describe America’s Constitutional Republic, undermine ‘democracy.’

Democrats have seized on new voting restrictions in Georgia to focus attention on the fight to overhaul federal election laws, setting up a slow-building standoff that carries echoes of the civil rights battles of a half-century ago.

. . . . H.R. 1 is vast, and its Senate counterpart would confront the new Georgia law by expanding voting by mail and early voting, both popular during the pandemic. It would more broadly open ballot access by creating automatic voter registration nationwide, allowing former felons to vote and limiting the way states can remove registered voters from the rolls. It also addresses campaign financing and ethics laws.

Democrats are treating the Georgia Election Integrity law as a “crisis.”  And they do not intend to let it go to waste.

My favorite line the left uses on voter ID is “Republicans are so racist, they expect minorities to have ID. You can’t expect them to know how to get an ID! That’s racist!!”

The Democrats see them as pets. Pets that must be fed, clothed, housed, and cared for because they are domesticated animals incapable of fending for themselves.

Stop lying. Non-DL IDs are a thing in every state.

Instead of reaching for the lying perjorative you might want to ask questions. It may be the case that some states accept voter IDs of varying nature’s but it remains the case that some states are very specific on the ID requirements. The idea that there are non driver IDs isn’t something I referred too so you can’t really claim I’m lying can you. Nor have you addressed the central part of the claim which is that voter ID laws have a measurably restrictive effect on voting, as opposed to fraud which has been measured as practically zero. The greater impact is voter ID laws.

First of all, Mark311, you are a Brit, so you can’t even vote here (legally). Second of all, you need an id to do pretty much everything from driving to banking to flying on a plane to buying booze to attending a Joe Biden rally.

The Biden admin is floating a “vaccine passport” requirement to engage in economic and recreational activities. Is this not similarly racist? Doesn’t this mean that minorities who have no access to healthcare/the vaccine are shut out of society? After all, if the left thinks black and brown (how insulting those terms are!) people too stupid to get a valid ID to vote, how can they expect them to get a “passport” that requires them figuring out how to get tested/vaccinated? You people are truly the most racist, disgusting, vomit-inducing lot.

Georgia’s new law is far less “restrictive” than that in Biden’s home state of Delaware.

Here’s the thing, voter ID laws protect elections by ensuring that only those eligible to vote cast a vote. Similarly, one must have an ID to drive a car, to board a plane, to open a bank account, to rent a car, to register in a hotel/motel, to attend any political rally, to enter the U.S. Capitol as a visitor, to obtain a job, to purchase a firearm, to buy property, to purchase tobacco or alcohol, to purchase subscription subway and toll passes, to obtain welfare/food stamps/unemployment/social security/MediCare/Medicaid benefits, and to do pretty much anything.

Explain to me, Mark311, why we need our planes, political rallies, hotels, booze-buying, government handouts, and etc. more secure than our elections. Tell me why it’s important to have a vaccine passport to travel or to take part in commerce but not a legal ID to vote. Type slowly because I’m sure your explanations will be compelling and thought-provoking.

“You can fool some of the people, all of the time.” That’s why they lie so blatantly.

What’s funny is the Democrats suddenly smearing everything the Republicans are doing as “Jim Crow” this and “Jim Crow” that.

Who exactly was responsible for Jim Crow, again?

And who helped lead the fight against integrated schools?

I spoke with a college president (top liberal arts college). I pointed out the fact that for 50+ years the goal has been a color blind society per MLK. He said that “legal discrimination” is fine. I said that at one time, Jim Crow Laws were legal – but that did not make them morally right – and the same with AA and other, so-called “legal discrimination”. I said that MLK would vomit if he were alive today to hear Kendi’s proposed solution to racism is more racism. He proceeded to double down on the benefits of “legal discrimination” like he was reading from a script.

Who exactly was responsible for Jim Crow, again?

If you don’t believe in protecting the integrity of our elections then you don’t deserve to vote period.

Oh, and opening voting to multiple days is not protecting election integrity. It’s enabling fraud.
One citizen. One vote. One day.

My idea: a 24 hour voting day, and NOT adjusted for time zones. Say, open the polls at 7AM Eastern time, which is 4AM Pacific. Let 24 hours pass, then close the polls 7AMY Eastern, 4AM Pacific. Everyone gets a shot at it regardless of work shift times.

All the polls close at the same time. That way, the press can’t do stunts like reporting liberal Florida (eastern) has gone overwhelmingly for the communist, making the conservative Florida (Central time) have second thoughts about bothering to vote.

Every state has two senators. 120 years ago, Delaware’s senate seats were filled by Richard Kenney and Vacant. The more things change, the more they stay the same, except now Vacant occupies the White House!

The Republicans better get busy of they will be the Washington Senators and the Dems will be the Harlem Globetrotters – always winning. Count the write in votes first. Find out how Florida did it in 2020. Less problems than other states.

You had me at “Democrats lying.”

Its annoying that voting issues are so politicised. Seems to me that the truth is likely in the middle somewhere, the case for ID is pretty poor given the lack of fraudulent election evidence. This is vs the data that strongly suggests that voter ID laws restrict voting.

I guess the liberal socialist communists don’t care for a fair election with voter ID, & only legal citizens being allowed to vote in a fair & common sense manner as this does not give them the opportunity to cheat, as the only way they can get elected is by fraud & cheating. They would rather disenfranchise Republicans! They call us racist! This is also racist on behalf of liberal socialist communist Ds, as well.