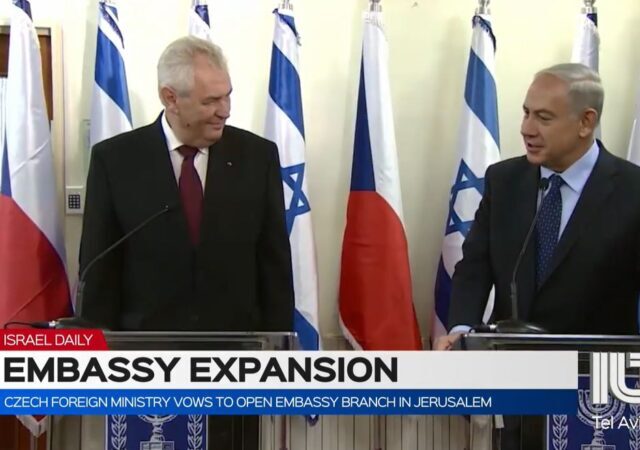 The 22-member Arab League, which includes military dictatorships, failed states and Islamist theocracies, passed a resolution on Saturday “condemning” the Czech Republic for setting up their full-fledged diplomatic mission to Israel in Jerusalem.

With the establishment of the de facto embassy in Jerusalem, the Czechs are fulfilling their pledge made during President Donald Trump’s presidency.

“We keep our promise,” Czech Prime Minister Andrej Babiš declared while inaugurating the office. “The Czech Republic will have a full-fledged diplomatic mission here in Jerusalem. It will deal with a lot — ranging from politics, economic cooperation, consular agenda, and other topics,” he added.

Foreign Minister Gabi Ashkenazi thanked the visiting Czech leader for “leading the change in Europe toward the city of Jerusalem as a whole and toward the connection with the State of Israel.”

Reuters reported the Arab and Palestinian reaction to the Czech decision:

The Palestinian Authority and the Arab League on Saturday condemned the Czech Republic’s opening of a diplomatic office in Jerusalem as a violation of international law.

Prague opened a Jerusalem branch of its Israel embassy, which is located in Tel Aviv, on Thursday.

The inauguration was attended by Czech Prime Minister Andrej Babis, two weeks after Israel sent 5,000 Moderna COVID-19 vaccine doses to the Czech Republic under a “vaccine diplomacy” programme that later came under legal scrutiny and was frozen.

The Palestinian Foreign Ministry called Prague’s move “a blatant attack on the Palestinian people and their rights, a flagrant violation of international law,” and said it would harm peace prospects.

In Cairo, Arab League Secretary-General Ahmed Aboul Gheit said in a statement: “The legal status of Jerusalem will be affected by the decision of one country or another to open representative offices. East Jerusalem is an occupied land under the International law.

The Jerusalem Post newspaper described the move as a “as a sign of [Czech Republic] recognition that the city is Israel’s capital.” The decision is a acknowledgement of President Trump’s 2017 recognition of Jerusalem as Israel’s capital, a decision opposed by the European Union, and most of the Arab and Muslim-majority countries.

The move is a major diplomatic triumph for Prime Minister Benjamin Netanyahu ahead of the March 23 general election.

I think it would be news when they are not enraged.

Arab squatters in Jew’s homeland should be given a steady stream of real reasons to be outraged, with fuel air bombs dropped on a 3 mile grid, that would leave some of them still alive who would then understand that their terror activities, just like everything else they do, just do not measure up to what can be done to them.

Think about these people cowering in fear.

My Czech mommy would be proud.

My brother-in-law has been friends with Pan Andrej Babiš since grade school in Bratislava. Pan Babiš is actually a native Slovak.

Fun fact: Most people would guess it’s the Germans or the British, but actually the Czechs drink more beer per capita than anyone else in the world.

Pilsner Urquell, my favorite beer in the world!

Although, I have to admit when in Japan on a hot, humid summer day watching 5,999 scantily clad dancers shake it through the streets of Tokyo in the Asakusa Samba Festival…

…nothing tastes better than Kirin bi-ru out of a huge frosty mug.

The great Japanese Kirin brewed in Japan. Not the p***water that we get here marked “Imported” but it’s brewed by Labatt’s in Canada. When in Rome…

Anywhere else, it’s the original pilsner for me. Brewed in Plzen, Czech Republic whenever I can get my hands on it.

American support for Israel is 100% and non-revocable. I salute Checz Republican and condemn Angela Merkel and the EU. They are progressive anti-semites, they encourage the hatred of Israel by bad foreign actors. I condemn all forms of anti-semitism and support Israel 100% even if the democrat party doesn’t. God forgive them.

Of course they’re outraged. Muslims are always outraged. The question is why anybody cares about it.

When Muslims do not have external enemies, they kill their fellows of petty outrage. There is a reason that Middle East foreign policy has always been difficult, they are all a bit or more crazy.

Anything that outrages the Phonystinians is okay with me.

The ‘Palestinians’ are caught in a time warp. They apparently believe that the US and other Nations are too caught up in a cold war with the USSR and too worried about another oil embargo to respect the sovereignty of Israel.

Guys, the cold war is over, the US has achieved near energy independence. The geopolitical calculations of 1973 no longer apply.

Now the Biden administration may allow the tantrums of the ‘Palestinians’ to influence their policies. Some European nations with large Muslim minority populations may do so as well. The rest of the world outside the elite consensus certainly will not.