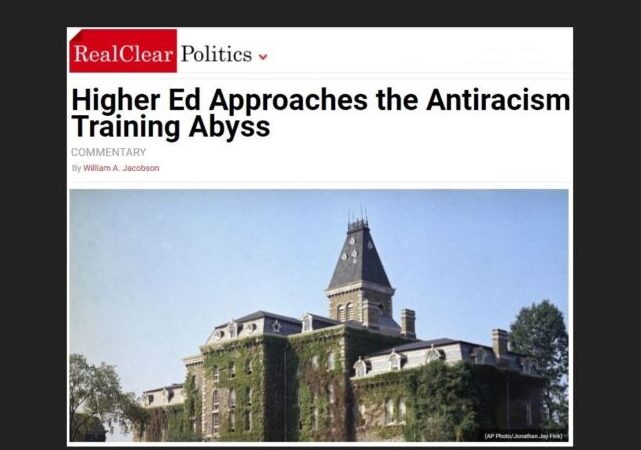 I use the example of proposals pursuant to a Cornell presidential initiative launched in July 2020 that should be coming to a Faculty Senate vote soon, followed by presidential review and possible approval. If implemented, these proposals will make the existing free expression problem at Cornell substantially worse, in addition to injecting racial conflict into every aspect of campus.

Head over to RCP and read the whole thing, and share it. Here is an excerpt:

Rather than lessening racism, these approaches adopt discriminatory racial practices and verbiage that in any other context would be rightfully deemed racist. Instead of focusing on inherent human worth without regard to skin color, race becomes the obsessive focus and measure.

The ubiquitous term “antiracist” thus is one of the greatest linguistic sleights of hand and deceptions of our time, yet it is unmistakably transforming education in America today….

This corrosive ideology has swept American culture, especially on college campuses, where it threatens irreversible damage to academic freedom. Cornell University, where I have taught law since 2007, is approaching this abyss under an “antiracist” initiative launched after George Floyd’s death. Unfortunately, Cornell may become an example of how a desire to address racism can go horribly wrong….

The cumulative effect of these initiatives is coercive not educational, tying academic and professional performance to a deceptive concept of “antiracism” that in reality is neo-racist and endangers free expression. Dissent will be silenced when grades, evaluations, continued employment and professional advancement are tied to meeting top-down mandates, creating an environment of compelled activism and compliance in which opposition is defined as inherently racist.

Cornell already ranks low in protecting student free expression. Like so many institutions of higher education, it is also now putting at risk its ability to protect academic freedom for its students and faculty. Hopefully, the Cornell senior administration will pull the campus back from this brink.

Racial struggle and conflict are not the answer in higher education or elsewhere in our society. As universities across America push neo-racist “antiracism” ideology, they are damaging themselves and our nation.

For more details on what is happening at Cornell, see my posts from several months ago:

A university is the unique place where anything that you believe is true can be said.

Do you get pushback or do you get cancelled, is the test.

The moderator will not allow me to provide a link – so just search on google.

In summary, naturally there are differences between people in the same family, the same race and between races. It is unrealistic to expect society to create equal outcomes among human’s who are all very different.

this makes me sad. I spent many happy hours on the Cornell campus with friends. Hard to believe such a beautiful place can harbor such evil

The dynamic, if it’s like Oberlin, is that recent graduates swamp the vote for trustees, so it drifts more and more leftward with each graduating class.

If only it were just Cornell that is the problem.

Past efforts to combat racism appear to be the opposite of CRT.

Past efforts went after racism that was self evident, but CRT requires that we must be educated on what is now considered racism.

Past efforts were focused on making everyone’s life better thus leading to a better country while CRT focuses on tearing down people in order to lift up one group.

Past efforts were focused on love and tolerance while CRT is focused on absolute intolerance, no forgiveness, and anger – even hate.

Past efforts focused up bring us all together while CRT demand we all come apart as enemies.

Past efforts were based on values found in the Bible while CRT is completely anti-Christian.

Past efforts were focused on justice and what is fair while CRT uses claims of racism as a cudgel to exact retribution and revenge for all sins both real and perceived.

How has America become so duped into giving such a flawed theory a place of such prominence?

This all started with so called “Affirmative Action” and drifted left from there. How can favoring one race above all others NOT be discrimination?

Applicants for jobs and schools, the military, etc. should have their race/color/religion hidden to determine who qualifies best, but absolutely no one has even turned back AA so we won’t hold our collective breaths.

50 years of AA.
Result – dumbing down of America’s educational standards in a desperate attempt to massage the numbers to show AA worked.

In the same 50 years, nearly all Asian immigrants came to the USA. Most came off the boat penniless and barely speaking English. in just 2 to 3 generations, they are so successful that Harvard has to discriminate against them.

No one wants to look at this objectively and ask the real question. Maybe black culture is a factor.

“The ubiquitous term “antiracist” thus is one of the greatest linguistic sleights of hand and deceptions of our time,…”

Kendi’s plan in a nutshell (emphasis on “nut”) is to use actual racism to fight perceived racism or what little racism that has not been weeded out in 30 years of pogroms and “political cirrect” dogma.

Don’t be fooled. This is a pretext for undermining our society and for Progressives seizing power.. This is well-organized and it is succeeding because the plan unfolds over 20+ years so that most people are aware of only incremental changes. They know where this is going – but they don’t wat you to know.

In a similar track, immigration is another item. It undermines society and our culture because 60% to 70% of all immigrants every year for 30+ years have come from only ONE RACE and from only 2 to 4 countries in central America (mainly Mexico).

Where is the outrage on the left for our SYSTEMICALLY RACIST immigration system ??

Progressive view is racism is okay as long as we get to decide who you discriminate against.

Correction – Last line – “we” meaning “they”

Every one of them means the exact opposite of what it says, yet we are expected to treat every one as if it were God’s Truth.

With respect professor this is not a desire to address racism this is a desire for equity which is racism and to play the hero by demonizing Republicans and white men.

It is an openly disgusting racialist ideology (they even name it critical race theory, and make it clear they reject equality with the term equity) spread by disgusting excuses for humanity.

Not all Democrats believe in the racialist ideology of their atrociously evil party but University Presidents and senators and other major figures are very obviously well informed and perfectly mindful of what they are doing.

Super-anti-racist – judge people by the content of their character, rather than the color of their skin.

Time to brand ourselves as “super-anti-racist”.