China, Russia Sign Agreement to Build Joint Base on Moon

China, Russia Sign Agreement to Build Joint Base on Moon 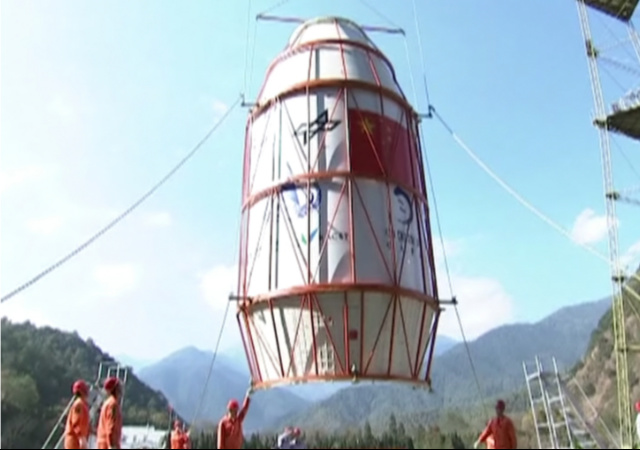 Communist China and the Russian Federation have agreed to build a joint station on the moon. According to the bilateral agreement publicized on Wednesday, they want to create a “complex” of facilities on the moon’s surface and its orbit.

The announcement comes against the backdrop of Chinese efforts to weaponize space. Five years ago, China’s People’s Liberation Army created the Strategic Support Force, a wing dedicated to space and cyber warfare. Beijing has since developed a range of missiles capable of destroying low and high-orbit satellites. The Communist regime has also expanded its global spying capabilities with more than 120 surveillance and military satellites currently circling the globe.

China and Russia have announced their intention to build a new lunar research station together, launching a new era of collaboration in space between the two countries.

According to a statement published on the China National Space Administration (CNSA) website, the International Lunar Research Station (ILRS) would also be open to use by other countries. (…)

The research station could be built either on the lunar surface or in lunar orbit to conduct “scientific research activities such as the lunar exploration and utilisation, lunar-based observation, basic scientific experiment and technical verification,” the statement said. (…)

A memorandum of understanding on the project has been signed by Zhang Kejian, CNSA’s administrator, and Dmitry Rogozin, the chief of Russian space agency Roscosmos.

The Chinese space program is primarily geared towards military use. According to the U.S. publication Defense News [June 2020], “Beijing’s doctrine considers space a military domain, and it is investing heavily in space infrastructure designed to secure both economic and military advantages.

A 2020 Pentagon report disclosed that China is developing weapons and technologies capable of destroying satellites and navigation systems, a strategy that can “blind and deafen the enemy.”

In 2017, the Trump administration initiated the Artemis program for moon exploration. The plan envisioned a multi-national lunar base and the first human-crewed mission to the moon by 2024, the first time in 49 years. It remains to be seen if the Biden administration will pursue the project with the same urgency.

The Sino-Russian space agreement comes as Beijing is boosting its military budget to challenge the United States on the global stage.

“I worry they’re accelerating their ambitions to supplant the United States and our leadership role in the rules-based international order,” Adm. Philip Davidson, commander of U.S. Indo-Pacific Command, said this week. “You’re going to find a very global, expeditionary Chinese military that will be there to step in anywhere they think China’s interests are jeopardized,” he added.

With President Joe Biden in the White House, Communist China has unveiled an ambitious plan to surpass the U.S. economically and militarily.

“China is expected to increase its defense spending by 6.8% in the coming fiscal year,” The Voice of America reported Tuesday. “Some projections even envision the Chinese navy being able to outgun the U.S. in the Indo-Pacific, from a 3-1 advantage in aircraft carriers up to a 54 to six advantage in modern, multimission combat ships, by 2025,” the broadcaster explained.

That’s ok. Donald Trump said a space force was good, so we have to cancel it.. Meanwhile China and Russia will build a base on the moon and we’ll peacefully protest the lack of diversity and inclusion among the astronauts they station there.

Maybe we can send protesters into space without helmets to riot and loot the moon base.

The Biden* administration is more likely to build gulags instead of moon bases. We have already seen how they bungled the Wuflu response.

When the Chinese and Russians get men to the moon, I hope they will stop by the SpaceX Welcome Center and get a Coke from the Snack Bar.

It would be entertaining if a big rock smacked them down.

How long until Taiwan is under Beijing’s complete control?

The race to exploit and deplete the mineral deposits on the moon begins. I’m sure China views this as an excellent resource for them to consume in their climb to global superiority.

No, it doesn’t. The Moon is almost entirely silicates. Extracting minerals from the hardest-to-reach places on Earth is orders of magnitude cheaper than mining the Moon; any technology that makes getting mining equipment to the Moon cheaper will also make getting it to those earthly locations cheaper. Mining the solar system is space fantasy on a par with FTL travel and bug-eyed aliens.

Like the Apollo program, this is a purely military exercise and needs to be treated as such by Western nations.

Suggest you read up on Helium-3. “The abundance of helium-3 is thought to be greater on the Moon than on Earth, having been embedded in the upper layer of regolith by the solar wind over billions of years,[5] though still lower in abundance than in the Solar System’s gas giants”.

We do not know enough about the moon’s geology to know what might be there or how it is distributed. The moon was hot at one tine, there is a pretty good chance that material stratified during that time. There have been big meteor hits which may have caused core materials to be plashed around.

Much of the evil in this world will waste no time while Jim Ignatowski is in office.