“China is building more underground silos from where its most powerful intercontinental ballistic missiles could be launched.” 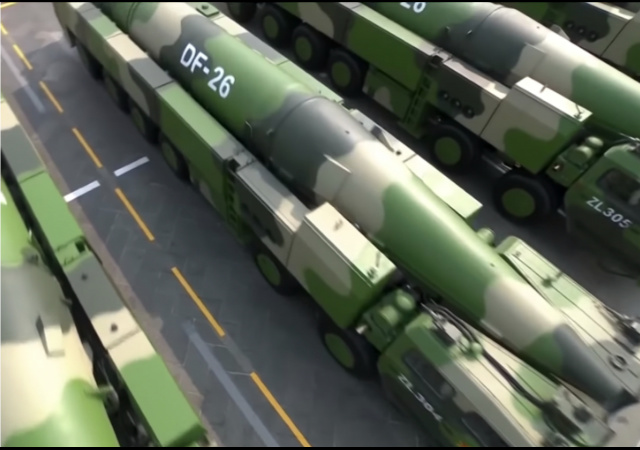 While President Joe Biden’s administration looks forward to diplomatic talks with China and Iran, both regimes have started to build ballistic missile facilities.

Chinese nuclear-armed ballistic missiles are not only capable of hitting anywhere in the world, but they can also target satellites and space assets in the earth’s orbit. Iran, aided by Russian, Chinese, and North Korean technology, can strike western Europe.

The latest satellite imagery shows China’s new underground ballistic missile base coming up in Inner Mongolia. Up to 16 silos seen under construction at the site can fire the “most powerful intercontinental ballistic missiles” owned by China, the media reports on Tuesday said.

It said that as military rivalry with the US intensified, China was moving to expand its nuclear deterrence strategy and the missile silos were part of that.

The new underground silos are located in the centre of the Jilantai training base, within a total area of 200 sq km, and are spaced between 2.2km and 4.4km apart so that no two of them can be destroyed in a single nuclear attack, according to the report.

China’s DF-41 missiles can carry multiple nuclear warheads and can be fired from a silo-based platform or a road- or rail-based mobile launcher.

“Iranian state TV has aired footage of what it said was a new Revolutionary Guard base, a ‘missile city’ armed to the teeth with cruise and ballistic weapons,” CNBC reported.

The Times of Israel published the details of the newly unveiled Iranian “missile city”:

Iranian state TV has aired footage of what it said was a new Revolutionary Guard base, a “missile city” armed to the teeth with cruise and ballistic weapons.

Inside the underground facility, the footage broadcast Monday shows what appear to be advanced munitions including scores of missiles lined up along concrete walls. Outside, the base hosts what the Guard said is electronic warfare equipment, including radar, monitoring devices and simulation and disruption systems.

“What we see today is a small section of the great and expansive missile capability of Revolutionary Guards’ naval forces,” Guards commander Gen. Hossein Salami said on the broadcast.

The state TV broadcast did not disclose the exact location of the base, and its authenticity hasn’t been independently verified, but it is believed to be one of several underground facilities that the Islamic Revolutionary Guard has built along the Gulf coast as tensions with the U.S., Israel and the region rise.

The revelations come as both regimes are set to enter into diplomatic talks with the Biden White House.

At the U.S.-China summit, which begins Thursday in Alaska, Beijing wants to “reset” relations with the Biden administration after four years of President Donald Trump.

“Chinese officials … have spun the meeting as an opportunity for Washington and Beijing to reset their relationship and, as the world’s leading powers, hash out the new international order,” Politico reported.

The Biden White House has proposed nuclear talks with Iran to revive the Obama-Kerry nuclear deal scrapped by Trump in 2018. As a precondition for the talks, Tehran demands an end to all U.S. sanctions and one trillion dollars in “reparation” for Trump’s campaign of maximum pressure.

In recent years, China and Iran have cemented their military alliance. Overshadowing Moscow, Beijing has become Tehran’s biggest ally. Last year, both regimes agreed on a $400 billion trade and military deal. “In addition to massive infrastructure investments, the agreement envisions closer cooperation on defense and intelligence sharing,” the Forbes magazine disclosed in July 2020.

According to the Indian business daily Financial Times, China will be “allowed the use of Iranian air bases.” The agreement includes “weapons development, training between Iranian and Chinese armed forces and intelligence sharing.” The deal also allows Beijing to place “up to 5000 Chinese security personnel to protect its projects in Iran.”

“are spaced between 2.2km and 4.4km apart so that no two of them can be destroyed in a single nuclear attack”

One large meteor could take out the whole rats nest.

Don’r worry: those 2 idiots kamala harris and lloyd austin will take care of it, while on susan rice’s short leash.