“The resolution approved Monday directs initial funding of $400,000 from the city’s Local Reparations Fund to a housing program that will award eligible individuals up to $25,000.” 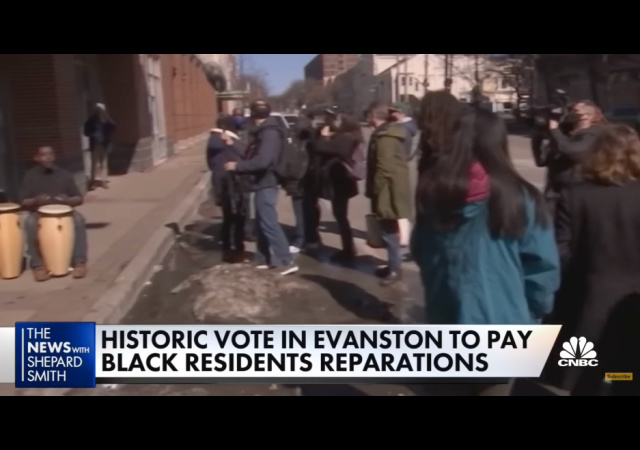 Evanston, a Chicago suburb, approved a $10 million reparation program for its black residents as compensation “for codified discrimination:”

“The Local Reparations Restorative Housing Program … acknowledges the harm caused to Black/African-American Evanston residents due to discriminatory housing policies and practices and inaction on the part of the City,” the resolution reads.

The reparation program is believed to be the first in the nation. The council crafted it as a way “to address the discriminatory housing policies and practices faced by Black residents.”

They plan to fund the program with marijuana sales taxes and donations:

The resolution approved Monday directs initial funding of $400,000 from the city’s Local Reparations Fund to a housing program that will award eligible individuals up to $25,000. That money can be used to help with a home down payment or closing cost assistance within the city; help pay for repairs, improvements or modernizations of an Evanston property; or help pay down mortgage principal, interest or late penalties on Evanston property, according to a memo from Kimberly Richardson, interim assistant city manager.

To qualify, an applicant must have “origins in any of the Black racial and ethnic groups of Africa,” according to the memo. Applicants must also be a Black resident of Evanston between 1919-1969, or that person’s direct descendant.

Applicants also qualify if they experienced housing discrimination due to the city’s policies or practices after 1969.

Evanston already received $21,340 in private donations. The city expects to pay out $10 million over 10 years.

Alderman Robin Rue Simmons, who introduced the program in 2019, described it as a first step.

Simmons declared: “It is, alone, not enough. We all know that the road to repair and justice in the Black community is going to be a generation of work. It’s going to be many programs and initiatives, and more funding.”

Ald. Cicely Fleming, 9th Ward, who cast the lone vote against the measure, said she did so because “what we have here before us tonight, I would counter, is a housing program with the title reparations.”

She said the housing program does not allow “people to dictate the terms of how they are repaired.”

Other residents said they wanted reparations in the form of cash payments, not mortgage assistance.

“I want reparations like any Black person in this city does,” said Evanston resident Rose Cannon, who supports cash payments. “(But) I am willing to step back and not take this in the package in which it’s presented to me.”

“Reparations is a huge, difficult, and complex project that seeks to address the damage done by white supremacy, one of the great prolonged evils in human history. It will not be “solved” on the first try,” Biss wrote. “On the contrary, we will have to try many different approaches, listen with an open mind to learn from what works and what needs to be changed, and adjust our strategy on an ongoing basis.”

I thought (and read somewhere) that a basic tenet of our entire legal system had something to do with blood guilt… The whole issue leaves me really confused, and I just do not understand how they are getting away with this.

Where do you get the idea this has anything to do with our legal system? This is Chicago.

Good point, but this is only the start…it will spread .

UNCONSITUTIONAL
This discriminates by race. See below, quote from the article.

“To qualify, an applicant must . . . [be from] Black racial and ethnic groups of Africa,” according to the memo. Applicants must also be a Black resident of Evanston between 1919-1969, or that person’s direct descendant.”

The Constitution does not apply anymore. The regime ignores it, and the military is busy forgetting the Oath.

Not an ‘effing dime.

Ignoring the justification of reparations, the sad fact is most people who get a large sum of money will be broke in a couple months if that. It’s all down to the individual; If you are good with money, you will use it wisely, if you aren’t good with money, it will quickly disappear.
Then what? Will they be back asking for more? Will Evanston give it to them? Are these rhetorical questions?

Then what? Will they be back asking for more?

No. They will be demanding it, and the local chieftains Reverends will be railing and screaming into every microphone and camera they can find.

Let me take a wild guess. More people than “expected” will show up for their handout. Less revenue will be raised than “expected” through donations and taxes on marijuana sales. Perhaps the “leaders” of Evanston have been getting out in front of the marijuana sales! At the end of the day, the grifters will have made off with $ millions and the taxpayers of the city will be left holding the bag. No wonder I’m disgusted!

Then they will use the taxes collected on malt liquor.

Thank you, Mary, for another important article about leftist idiots who somehow are given position of power.

(+Also taking the opportunity early in this discussion thread to let the L-I site administrators and the I-T dweebs know that my Android tablet is again loading just fine. Yay!)

They could cut the cost in half by handing out lottery tickets instead.

How do reparations survive 14A?

The Constitution only matters when leftists can use it as a cudgel against its perceived enemies.

So the people of Evanston are idiots. Good to know.

Knowing that this commitment is out there and that “it is not enough” (and will never be enough), why would anyone in their right mind purchase a home in Evanston?

Condescending and racist. It is intended to divide the races. The Democrats have a consistent history.

” fund the program with marijuana sales taxes”
So they’re paying for their own reparations.

We used to live in Evanston, home to Northwestern University. They never met a tax they didn’t like. Once a typically liberal town, Evanston has, like most of academia, gone hard left in the past ten years or so. It is also a pretty segregated place, with black residents heavily concentrated in the 5th Ward…something that goes back over 100 years. They still bus black kids for racial diversity into the most heavily white elementary school. The vast majority of residents are true believers.

We had a neighbor who lost his eye, and nearly his life, serving as a Marine in Korea. He and his wife are both gone now. I drove by the neighborhood the other day, and the people who now live in his house had handmade signs in the windows about white silence and violence. That captures the change right there.

Evanston prohibited bowling alleys, and until the 1970’s also refused to allow fast food franchises. Suposedly those in charge felt that such businesses would attract and encourage “the wrong crowd.”

Many observers assumed it meant that the community was ultra-conservative. Nope. Just ultra-controlling and stifling.

Those are actually myths, usually perpetuated by Northwestern students. Bowling alleys have never been illegal. The issue with Evanston is that it is really built up, highly residential, and like the rest of Chicago’s North Shore, really picky. A former Alderman tried to get a bowling alley to move in to a largely vacant shopping center but there was not enough room for it.

As for fast food franchises, it was a prohibition against franchises of any kind. The now-closed (victim of Covid and an expiring property lease) 24-hour Burger King just across the street from Northwestern moved in as “Chart House, Inc.” The city was miffed they got tricked, but the Burger King was there for many years. Evanston doesn’t have the usual college-town nightlife at all, so current students are upset there aren’t late night food options.

There is a McDonald’s a few miles north in Winnetka, but there are no signs and the interior has chandeliers. Towns on the north shore want local shopping and dining options, not franchises. Not that any franchises would be willing to move in. Not enough room and not enough traffic.

Evanston is still the home of the Women’s Christian Temperance Union. All Union Pacific North Line trains were dry because Evanston was dry. The first (and for a long time, only) liquor store in town was called “Evanston’s 1st.” To evade this dryness, a group of Lake Forest residents started a club and bought a private passenger rail car. The club still operates and Car 553 is still attached to Union Pacific trains twice a day. It is the only private rail car in operation in the United States.

“The average age of the world’s greatest civilizations have been about 200 years;

“During those 200 years, those nations always progressed through the following sequence:
1. from bondage to spiritual faith;
2. from spiritual faith to great courage;
3. from courage to liberty;
4. from liberty to abundance;
5. from abundance to complacency;
6. from complacency to apathy;
7. from apathy to dependence;
8. From dependence back into bondage”

Denial of Americans’ unprecedented sacrifice of blood and treasure to stand up to slavers, Democrats, and diversitists (e.g. racists).

One would think Illinois fought for the Confederacy.

Same political party is it not?

“Alderman Robin Rue Simmons, who introduced the program in 2019, described it as a first step. Simmons declared: ‘It is, alone, not enough. We all know that the road to repair and justice in the Black community is going to be a generation of work. It’s going to be many programs and initiatives, and more funding.’”

Emphasis on “more funding”. $400K is not going to go far, even with a cap of $25K per person. At any rate, there is not enough money in the US Treasury to meets the demands of the greedy.

This vote reminds me of the joke about the Members of Congress who found themselves stranded in the Sahara Desert with only a single cup of water among them. The Communist members proposed voting everyone 10 gallons of water each, while the Republicans supporting 8 gallons. They settled on a compromise of 22.3 gallons each, with the Republicans congratulating themselves for their bipartisanship, while the Communists labeled Republicans as bloodthirsty monsters who wanted to kill everyone with thirst.

It’s going to be funded by a marijuana tax. Tax the rich Northwestern kids buying weed….

There are already outcries from black activists saying that the guidelines are too restrictive and that $25,000.

Makes it sound like this fund has been established for years, just waiting for an excuse to p* away its endowment. If so, this is nothing but the other shoe.

Anyone talking about Reparations should be required to visit the Cemetery at Andersonville POW Camp in Georgia!

How will the African-Americans pay their African brothers?