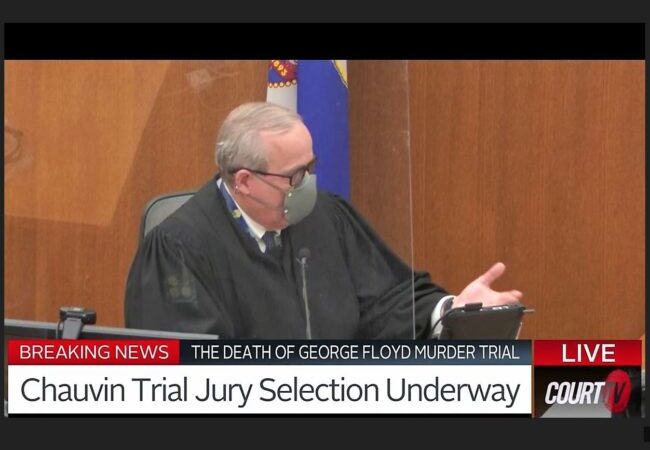 As we noted in this morning’s blog post on this trial, two of the already nine seated jurors were dismissed for cause after telling Judge Cahill they could no longer be fair and impartial after learning of the $27 million settlement that Minneapolis agreed to pay the Floyd family.  This brought the number of seated jurors down to seven.

The good news of today is that of the six prospective jurors subject to voir dire, two of those–#79 and #85—were acceptable to both the state and defense, bringing the number of seated jurors back up to nine.

The even better news is that both of these jurors struck me as perfectly fine jurors for this case, from the perspective of either the prosecution or defense.  More on jurors #79 and #85 in a moment.

Less good, prospective juror #76, who self-identified as a black male who lived in the area in which Floyd died, and who had the firmly established opinion that the Minneapolis Police Department was racist and hard murdered George Floyd, had to be removed by the defense burning a precious peremptory strike.

Despite the explicit bias expressed by #76, Judge Cahill declined to remove him for cause because #76 was willing to say the “magic words,” that he could set aside those strongly held beliefs and be a fair and impartial juror.

Surprisingly, the state did not raise a Batson challenge to this peremptory strike (a claim that the defense removed #76 for reasons of race), apparently being sufficiently satisfied to have the defense burn another peremptory challenge in removing #76.

I have more on prospective juror #76 below.

Better for the defense, however, was news not announced publicly until the end of the day’s court proceedings, but apparently told to the parties this morning, in light of the pre-trial publicity that exploded around the $27 million settlement Judge Cahill has agreed to allow the defense three additional peremptory strikes, and the state one additional peremptory strike.

He also cited the killing of Trayvon Martin as a comparable event to the death of George Floyd, and desired to be a member of the jury so he could “make a difference.”

He also told defense counsel Nelson that although “as a black man I face discrimination on a day to day basis,” he could nevertheless set that view aside to be a fair and impartial juror. 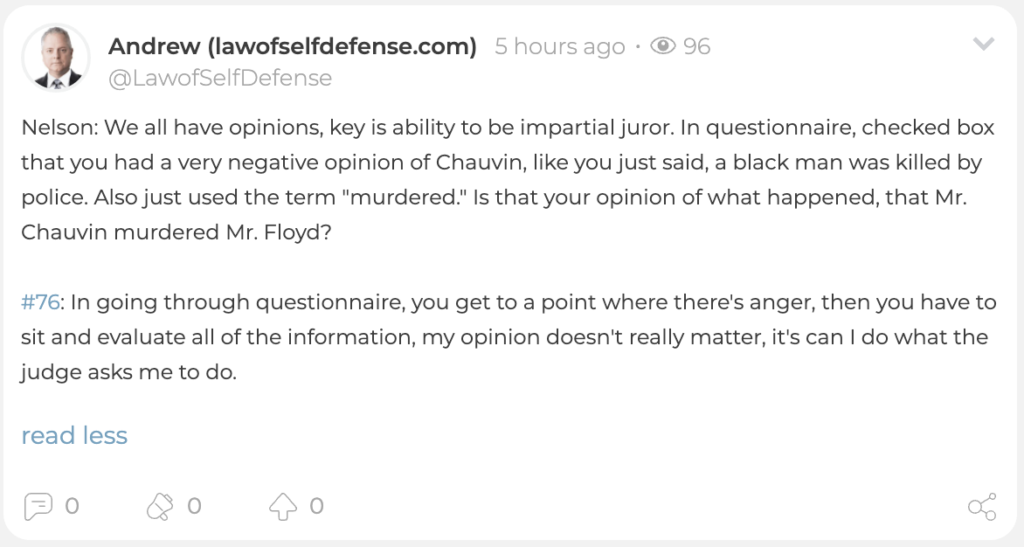 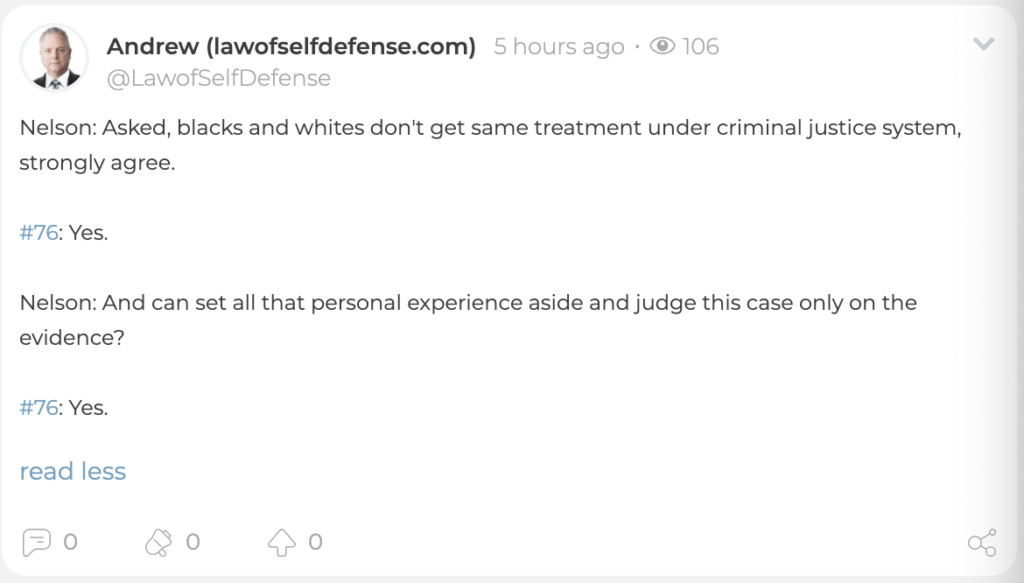 After the defense used a peremptory challenge to remove #76, the court took a few minutes to make a record of each side’s position on the juror, so that this reasoning would be available in the event of an appeal. 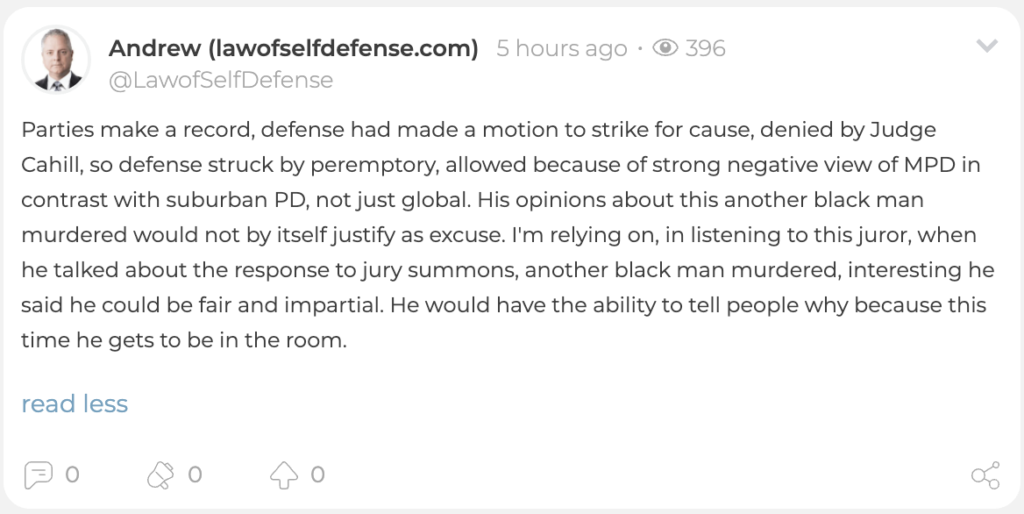 Here’s the video of that record being made:

Juror #79, a male, came across to me as a perfectly reasonable juror for the defense, as well as for the state. He worked in some kind of managerial position, with oversight of a staff. Interestingly, he had a rather pronounced accent, which sounded to my ear as one of central-African origin. He was, however, a United States citizen, and had lived in the Minneapolis area for some 20 years.  He had once had his home burglarized, and afterwards had a very positive interaction with responding police. 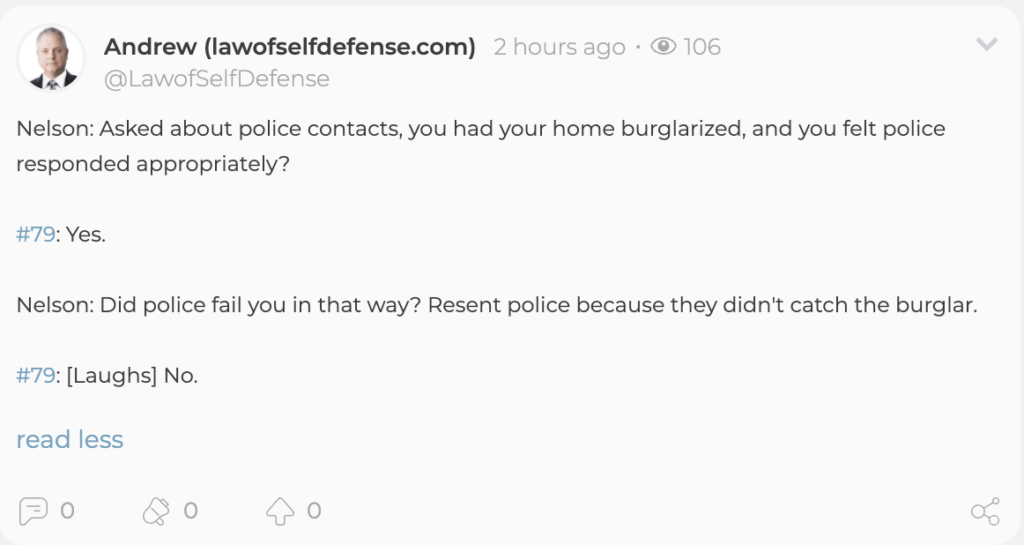 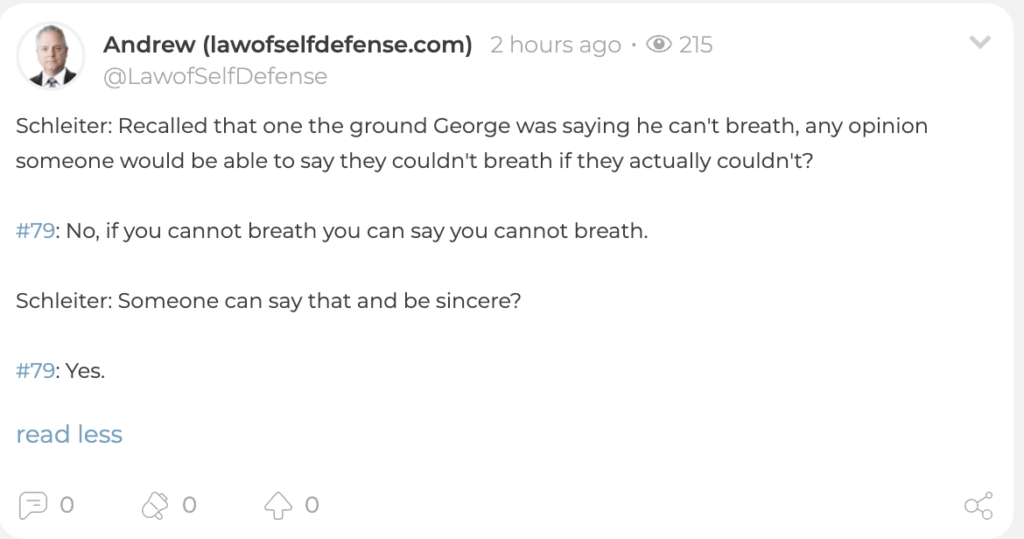 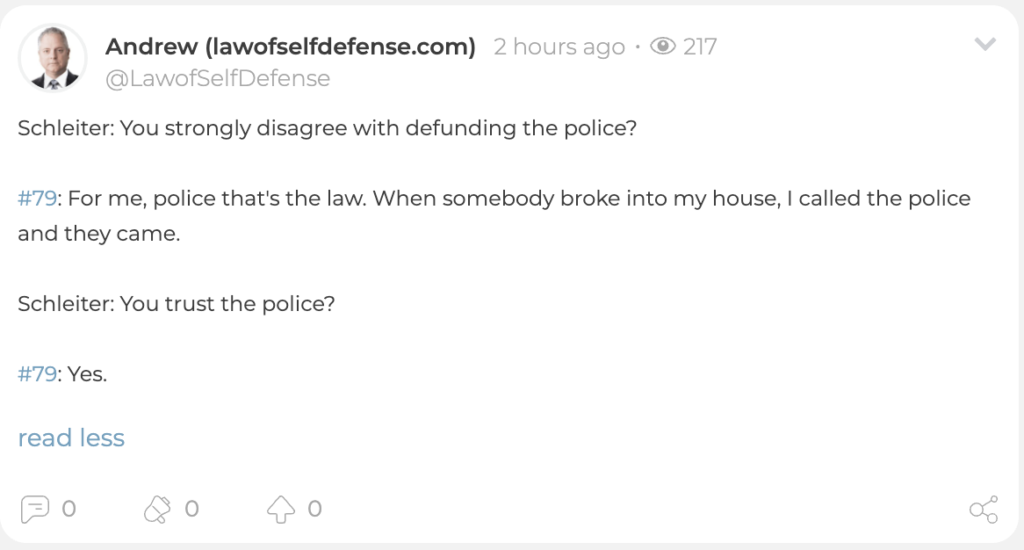 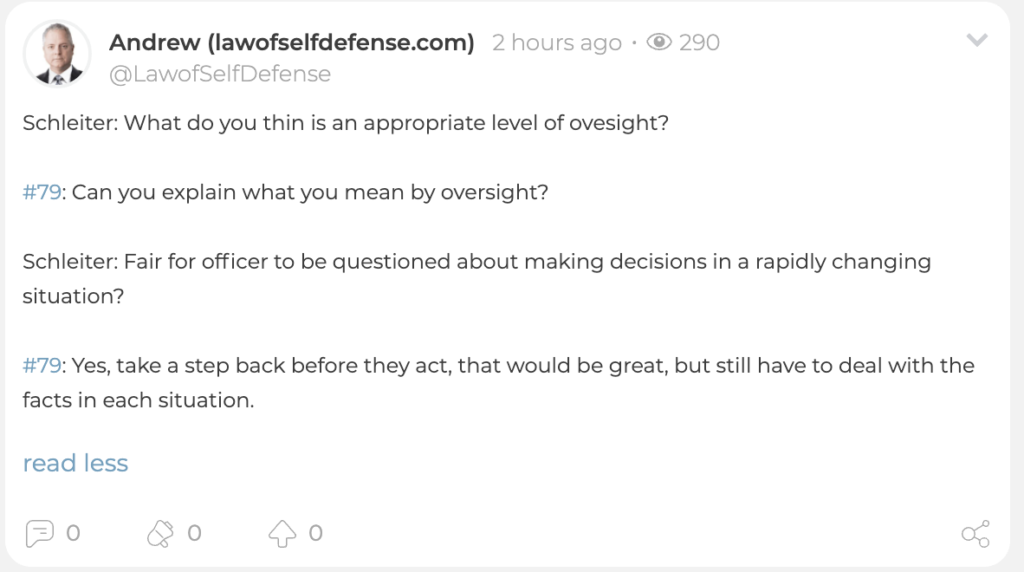 Ultimately, #79 was found acceptable by both the state and defense, and seated as the eighth juror in this trial.

Juror #85, a female, also came across to me as a perfectly reasonable juror for the defense and state.  She worked as a consultant for organizational restructuring. 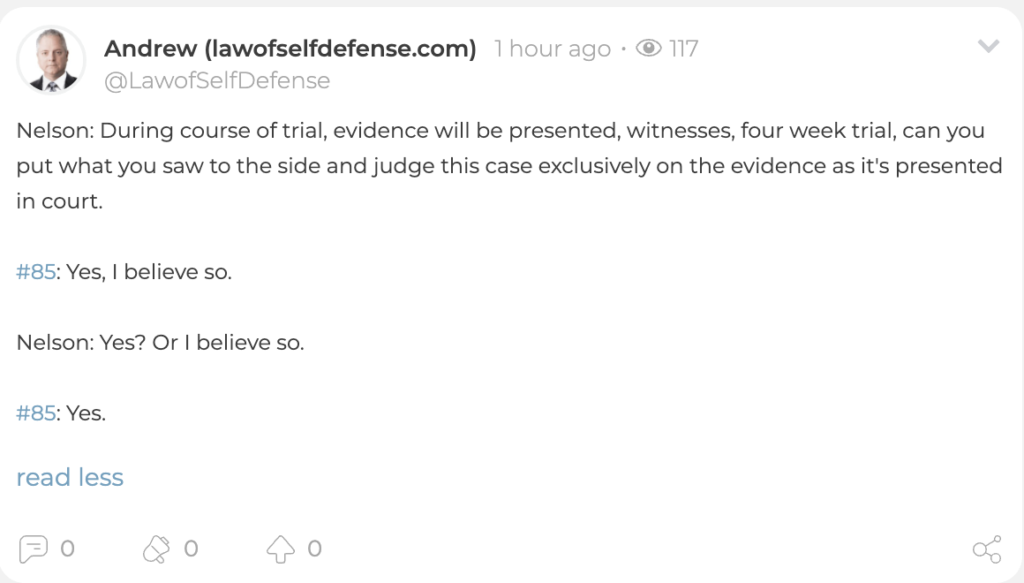 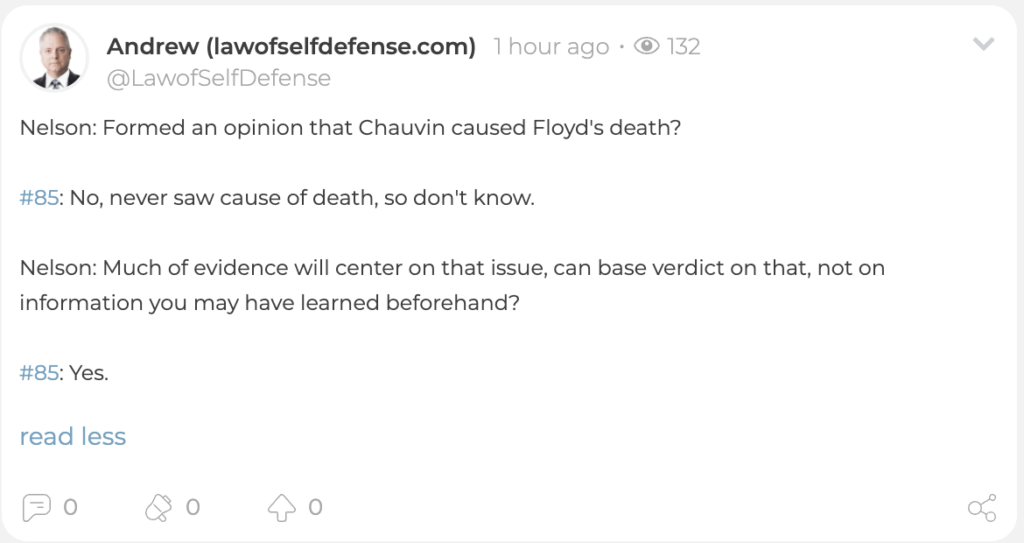 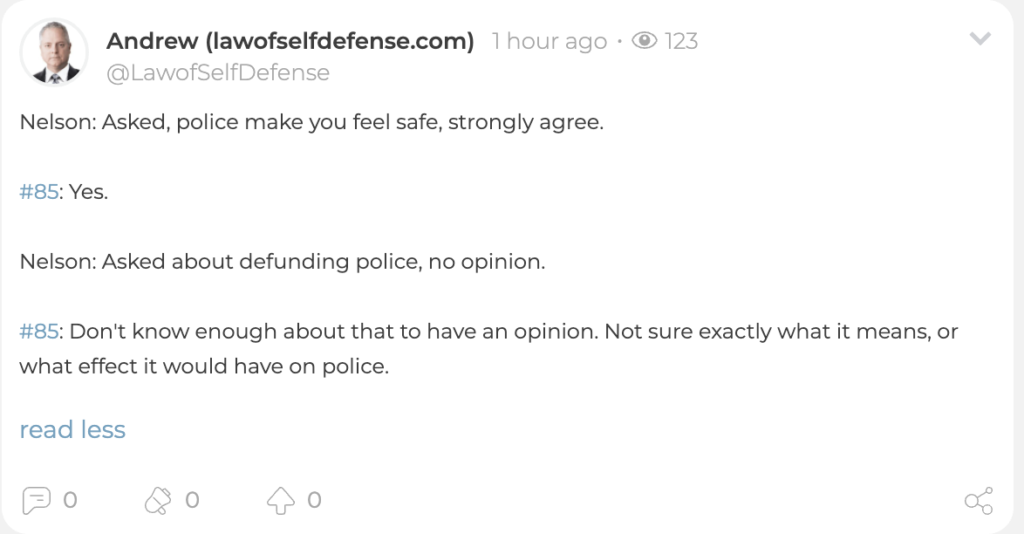 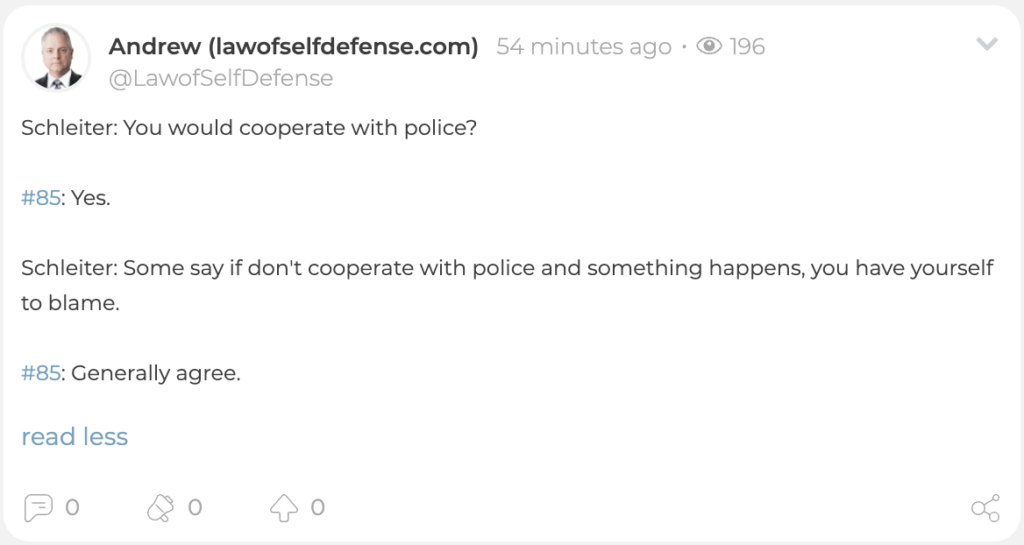 Ultimately, #85 was found acceptable by both the state and defense, and seated as the ninth juror in this trial.

Remaining Prospective Jurors Dismissed for Cause

All the remaining prospective jurors today were dismissed for cause.

Specifically, prospective juror #75, a male, was dismissed for cause after saying he was inclined to trust police testimony more than he would bystander testimony. 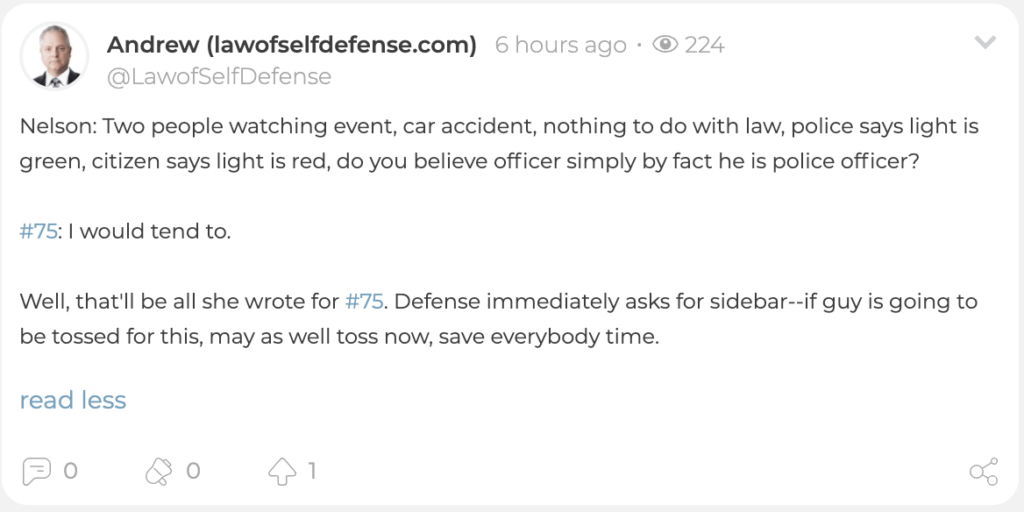 Prospective juror #78 was dismissed for cause after stating that he would have great difficulty starting the trial with the presumption that Chauvin was innocent: 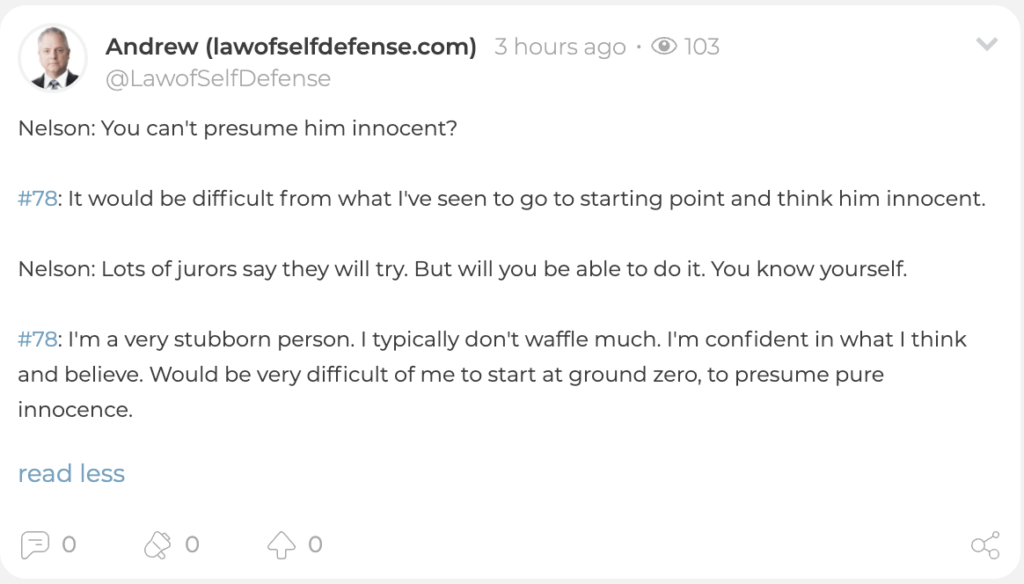 Finally, prospective juror #83 was very quickly dismissed after the court spent just a few minutes conducting voir dire entirely off microphone.  The suggestion made was that she was so emotional about the Floyd death that she simply couldn’t be a fair and impartial juror. Indeed, Judge Cahill indicated that she appeared to be wiping tears from her eyes as she left the courtroom.

At end of the day, Judge Cahill provided some updates on various motions before the court.

Finally, I’ll note that at the very start of today’s proceedings Judge Cahill spent about a minute and a half chewing out the media for apparently trying to view documents on the lawyer’s tables, as well as for disclosing some of the security arrangements in place. He threatened to cut off their access to the trial unless such behavior ceased.

And that was it for today, folks. We’ll be covering the trial again live when things start up tomorrow morning at 8:45am CT.

Judge Grizzly would throw the press out on their ears.

Out of a window. (If I recall correctly, the courtroom is only on the second floor, and reporters are dense enough to bounce, so this is not a threat. It would make an interesting pay-per-view.)

Is it really an automatic dismissal for cause if you say you would give a little more weight to a police officer’s testimony than to a civilian’s testimony about whether a traffic light was red or green? And why is it Nelson who is trying to get the juror tossed?

Nelson is just saving time. If the judge is going to excuse the juror for favoring police, may as well get it done sooner rather than later. It’s not like the prosecution is going to forget to touch on the issue themselves later.

I’m confused as to how favoring the police is cause for judge dismissal but favoring anti-police sentiment is not as long as you pinky promise to be impartial?

I’m confused as to how favoring the police is cause for judge dismissal but favoring anti-police sentiment is not as long as you pinky promise to be impartial?

What’s cause for dismissal is being more (or less) likely to believe a witness’s testimony just because they’re a policeman. A juror is supposed to regard all witnesses equally, and decide whether to believe them based purely on what they say on the stand and how they say it, not on their race, sex, religion, employment, or other outside factors.

In that case, can the defense attorney ask questions about believing the story of a Black bystander witness over a police officer and get those with bias struck for cause?

It doesn’t seem to be working that way.

So, JUROR #76 believes the defendant can (and should) receive a fair trial prior to his all-but-certain conviction. O ye of little faith, to doubt this juror can and will be strictly impartial!

He’s afraid of being called racist.

This was very blatant and obvious. “As a black man … I want to make a difference.” But forcing defense to burn a strike to remove this obviously biased juror seems sort of “inside baseball”. In the event of having to appeal a conviction, is this a plausible basis for a reversal?

“… In the event of having to appeal a conviction, is this a plausible basis for a reversal?”

IANAL but I expect not for a single instance especially considering the extra peremptory strikes the Judge has given the defense. You would probably need to establish a pattern. Even so convictions get reversed fairly often but usually not on this basis.

I have two overwhelming memories of having been a juror long ago in a place far away and far more metropolitan and diverse than the Ithaca region where I reside now. The first was shock and a “what am I doing here?” feeling at learning it was to be a manslaughter trial of some variation, which we did not know until after the jury had been selected. (To my further shock, I wound up being foreman, er foreperson.) The second at the trial’s conclusion was my near-awe at how the judge maintained order and managed the trial; he was inspirational. (He was the president judge of the county court system and passed away years ago.)

Do I believe I could be an impartial juror today nearly forty years later? I have serious reservations. I know what changed in those years, I have become deeply cynical. It bothers me greatly and matters not a whit, but there you have it.

I once commented here (and elsewhere) my belief that some of the most unheralded, brave people in the country were the jurors in the Ferguson-Michael Brown case. Jurors on this panel will join them. God watch over, guide, and protect them – it’s not clear to this cynic anyone else can or will. Not even here in this blessed country.

They had corrupt judges back in the early 1980’s. I was a juror for a trial before such a judge. After we correctly acquitted because of doctored evidence that wasn’t even consistent, the judge came back to have a chat with us. We were allowed to think it was a social visit, and I didn’t realize how unusual that is. He was asking how we reached the verdict. Obviously he wanted to overturn it, so he and the corrupt prosecutor could have another go at painting the defendant with his third strike and putting him away forever. In my hearing, we just told him that the evidence was not in favor of conviction, so hopefully he was stuck with our verdict.

The judge’s admonition to the press was notable. Disappointing was that those who had behaved this way weren’t immediately barred from attending the trial.

An admonition, but not moving them 100 feet away from the lawyers, is pretty weak. It’s like he wants to tick all the boxes in the lightest way possible, but so that a conviction would not be reversed.