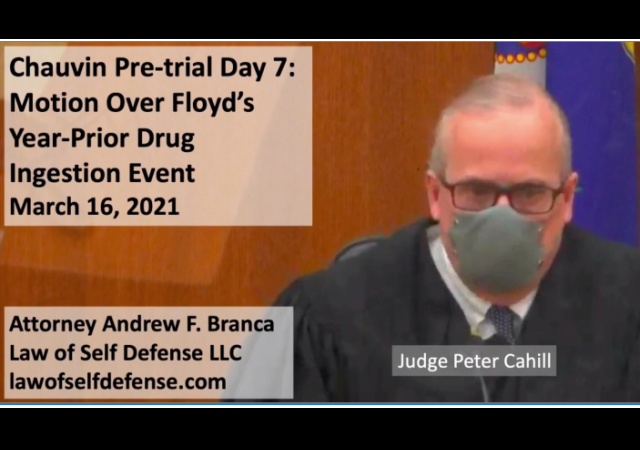 The most interesting part of this morning’s proceedings actually occurred outside voir dire, or jury selection, at the very start of the day.  This was the argument by both the defense and the state around the defense motion to admit evidence of George Floyd’s May 2019 arrest-related drug-ingestion event, which took place almost exactly a year prior to the May 2020 arrest-related drug ingestion event that ends in his arrest.

I’ll share details and video of those arguments in a moment, but first a brief summary of what happened in voir dire.

No additional jurors were seated this morning, so the count still stands at nine, meaning an additional five are required to have 12 jurors and two2 alternates.

Of these, the first three were dismissed for cause of various forms. Specifically, #63, a female teacher, was excused for hardship.  Prospective juror #64 is a male who works an IT job that has exposed him to news about the case on a daily basis, and he was excused for that exposure.  Finally, juror #66, a female, was excused because she had a newborn under 1 year of age and did not want to be separated from her child every day for the duration of the trial (expected to be four weeks, plus deliberations while sequestered).

In May 2019 George Floyd was approached by police, and apparently ingested a substantial quantity of illicit drugs in an effort to prevent their discovery.  He ultimately had to be hospitalized for this ingestion.  Floyd also exhibited the same kind of erratic, emotional, weeping, behavior in this 2019 arrest-related ingestion event as he would a year later when he would encounter Derek Chauvin.

Because of these similarities of the two events, the defense would naturally like to have admitted into court evidence of the 2019 arrest-related ingestion event.

There is a general rule of evidence, however, that restricts the use of evidence of prior misconduct, if that evidence is being presented to suggest that the defendant has a propensity to commit the crime with which he is currently charged.  A defendant is supposed to be tried on what he is accused of doing wrong in this particular trial, and not on what he may have done wrong sometime in the past.

For those interested in the nuts and bolts, this generalized rule of evidence is typically referred to as rule 404(b), and the Minnesota version can be found here:

So, if the evidence of the prior bad act is being offered to in effect argue, hey, this defendant did something bad a year ago, so we should infer from that the defendant also did something bad in the context of the current criminal charges, that evidence would not be admissible for that purpose. To allow such evidence for such purpose would be, it is felt, prejudicial to the defendant.

Much as with the generalized rule against the admissibility of hearsay evidence, however, there are a ton of exceptions to this generalized 404(b) exclusion of prior bad acts evidence.

For example, the prior bad act evidence may be admissible, despite being otherwise prejudicial, can nevertheless be relevant and admissible if it is relevant to an identified material issue in the case.

Now, obviously, the defense, in this case, will argue that Floyd’s actual cause of death was a drug overdose, not Chauvin’s knee, and in that sense, the prior drug ingestion event, which could have killed him and required hospitalization, would seem relevant.

That relevancy, however, is offset by the fact that this trial will include other evidence of Floyd’s drug ingestion at the time of his encounter with Floyd, and therefore the prior ingestion evidence may be found by Judge Cahill to be duplicative and excessively prejudicial, for the reasons just stated above.

Alternatively, as stated in Rule 404(b), such prior bad acts evidence may be admissible “as proof of motive, opportunity, intent, preparation, plan, knowledge, identity, or absence of mistake or accident.”  Also included here would be for purpose of showing a modus operandi, a standard practice of behavior, or a habit.

The difficulty with these exceptions for the defense is numerous. With respect to the absence of mistake or accident, for example, the state would likely stipulate that Floyd ingested the drugs intentionally, taking that issue off the table as a basis for admission of prior bad act evidence. With respect to modus operandi, the defense only has the single prior drug ingestion event, and one prior event is usually not enough to establish a pattern of behavior for evidentiary purposes.

With respect to relevancy on the point of Floyd’s intent, the state will argue that Floyd’s intent is irrelevant. That is, the state will argue that what matters is that the police are obliged to deal with a suspect as they find him, whether that person is a drug addict or overdosing or whatever, and to do so reasonably and appropriately. In the case of Chauvin’s interaction with Floyd, the state is arguing that the then-officer’s conduct was neither reasonable nor appropriate to the circumstances.

What matters then, according to the state, is not Floyd’s intent, but Chauvin’s intent, and because Chauvin had no knowledge of Floyd’s year-prior arrest-related drug ingestion event, that event is irrelevant to Chauvin’s state of mind.

The defense’s ultimate argument in favor of admitting evidence of Floyd’s year-prior arrest-related drug ingestion event is that the fundamental question, in this case, is what killed Floyd—the drug overdose or Chauvin’s knee—and that Floyd’s practice of ingesting dangerous levels of drugs when approached by police is relevant to the jury determining whether this practice could have been the cause of Floyd’s death in May 2020.

With that context in mind, here are some of my Parler content noted live in the course of this morning’s argument on this matter, followed by a video of the entire argument in court (those of you listening to this in podcast form will hear the audio of that argument).  I caution that the video (and, of course, the audio as well) are nearly an hour-long at 53 minutes in length. 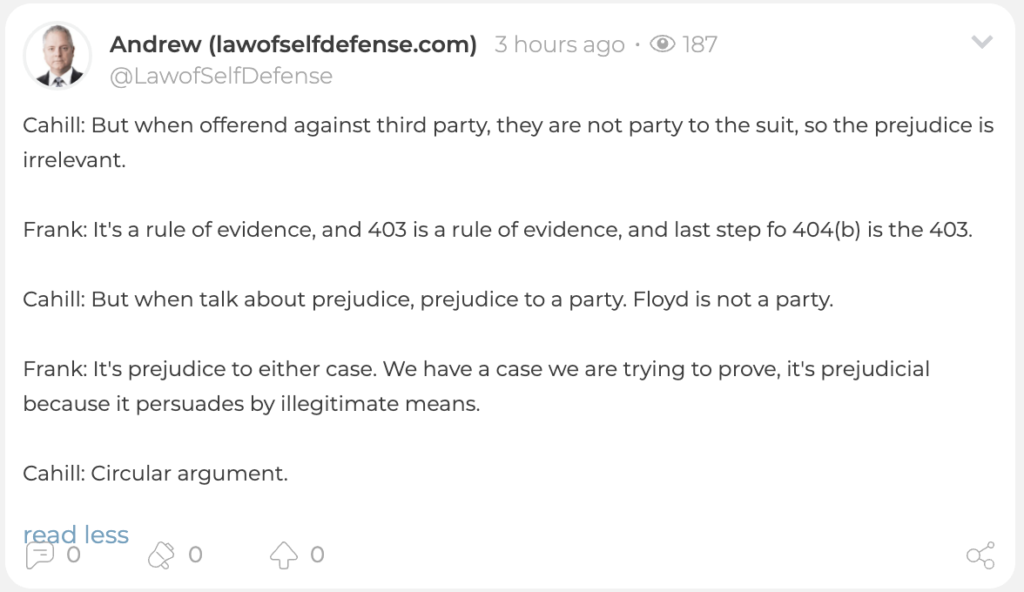 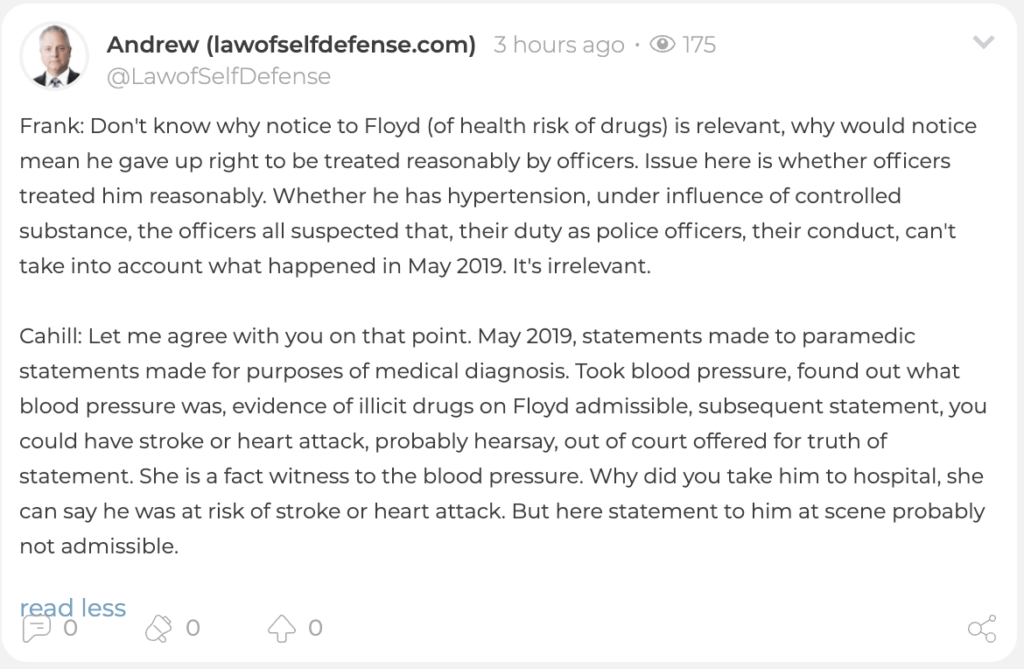 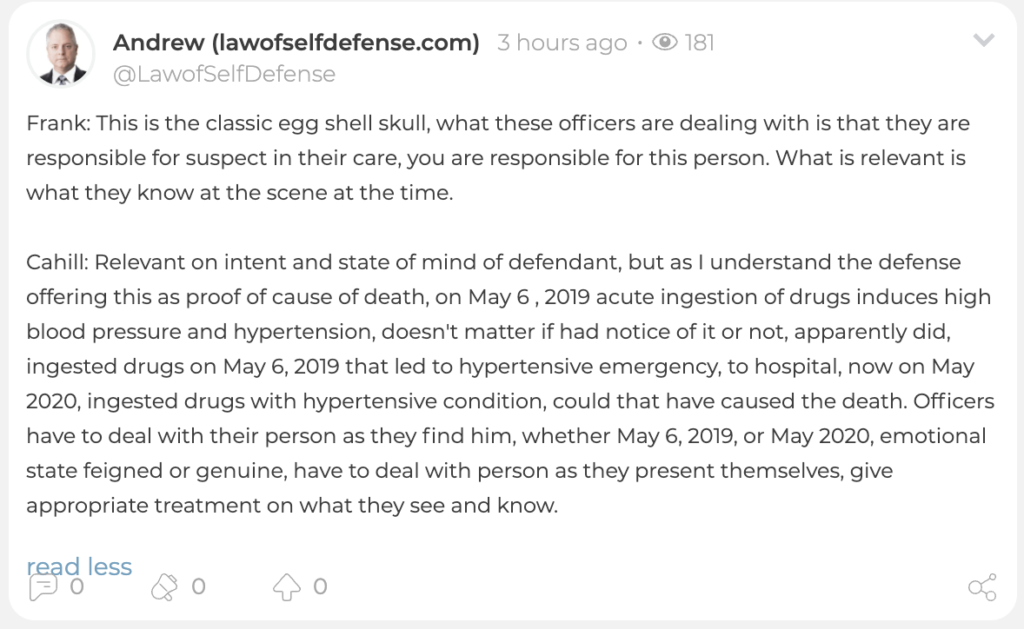 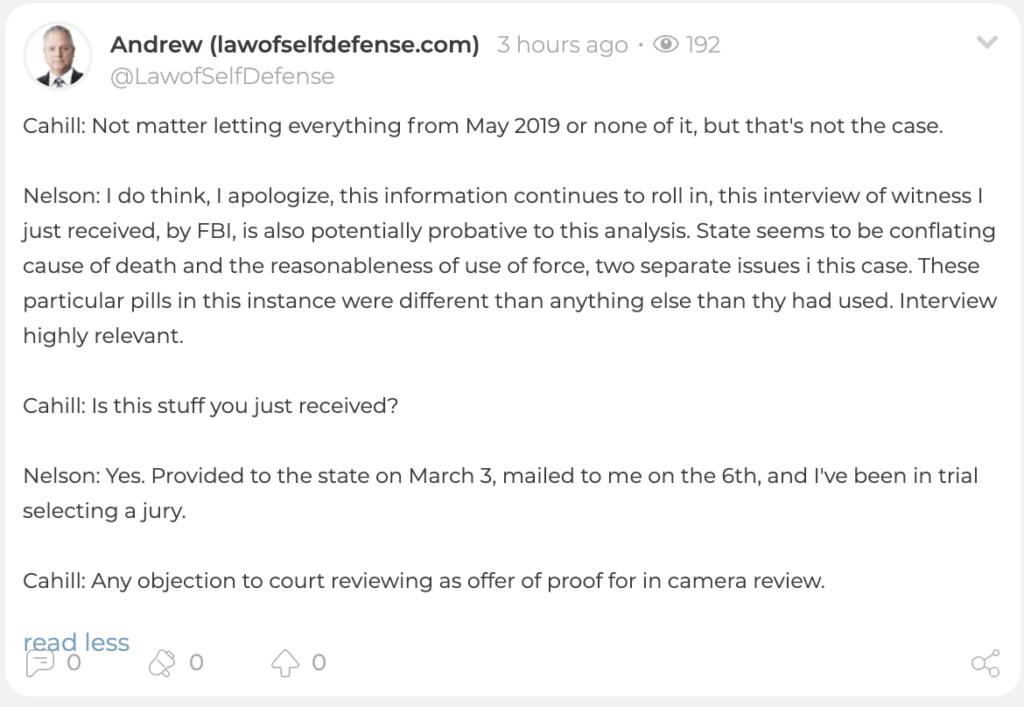 Video of Arguments Over Admissibility of Year-Prior Drug Ingestion Evidence

Separately, at the end of the morning session, Judge Cahill also announced that he would be conducting a brief follow-up voir dire with the first seven jurors seated over the issue of last Friday’s settlement by the city of Minneapolis with the Floyd family to the tune of $27 million. The voir dire will be done by Zoom, and only the judge, not the parties, will participate. Judge Cahill expected this to be something like a 5-minute process.

“With respect to modus operandi, the defense only has the single prior drug ingestion event…”

…that we know of at this time. It is possible that the defense has dug up evidence of previous ‘stash disposals’ or other mass consumption events that are not part of the public record, and since the prosecution doesn’t have them, they have not been leaked. We’ll find out in time.

The cops couldn’t know that his modus was to ingest to hid illegal drugs and all the cops knew was they had a large , heavy and strong combative individual that had to be restrained for the good of all including Floyd. The cops couldn’t predict that he had essentially committed suicide. Knee to the side of the neck can’t kill… period…nothing vital. This is all make believe to please the mob.

Why does that picture of the judge remind me of a “Mad Max” film?

I don’t understand a basic point about this whole thing. As you say, “There is a general rule of evidence, however, that restricts the use of evidence of prior misconduct, if that evidence is being presented to suggest that the defendant has a propensity to commit the crime with which he is currently charged. A defendant is supposed to be tried on what he is accused of doing wrong in this particular trial, and not on what he may have done wrong sometime in the past.” This is obviously correct and has to be so.

But here’s what I don’t get: Floyd is not a defendant. He’s the victim. So how is this rule at all relevant? If Floyd were on trial for drug possession, and were arguing that since the drugs weren’t found on him he’s not guilty, and the state were arguing that he had ingested them, I would agree that his prior bad act should not be admitted.

But in this context what Floyd did in 2019 is not a “bad act”. It’s just an act, on which the jury will not be asked to make a judgment. Chauvin’s the defendant, so his prior bad acts, if any, should be inadmissible, but Floyd’s acts, which for the purposes of this trial are neither good nor bad, should be admissible without question.

What am I missing here?

Because this isn’t really a trial. Oh, it has some of the earmarks of a trial but it’s a mash up of show trial and inquisition. Think Thomas Moore or Joan d’Arc. There has to be justification by the Left of all the destruction of last year. On the other hand, they also know that if the case goes to acquittal they will have to allow US cities to burn. With Biden/Harris in power, this is a mess that can’t be blamed on Trump (they will try). So misinterpreting the law is necessary. Witness the expansion of the definition of third degree murder to include only one person rather than a larger group of victims by the state supreme court. The State must have the prior history of Floyd struck.

As for relevance, as I wrote a few days ago, to me the 2019 incident makes the defense’s version of events seem more plausible. Without it I might think the defense is asking me to buy a huge coincidence; with it it’s not a coincidence at all.

SYG plugged one ghetto lottery game, in that it stopped lawsuits by criminals and their families.

Now, this kind of shakedown needs to be stopped. $27 million of taxpayer money was just flushed into an inner city cesspool.

Cow towing to threats of rioting is counter productive. Peaceful demonstrations are a right, extortion and treats of violence should be responded to with whatever amount of force is necessary, including putting down SOB’s who put others at risk of maiming and death.

The politicians pandered to the ghetto gangsters by paying off the family. It’s not the politician’s money so they are happy to do it.