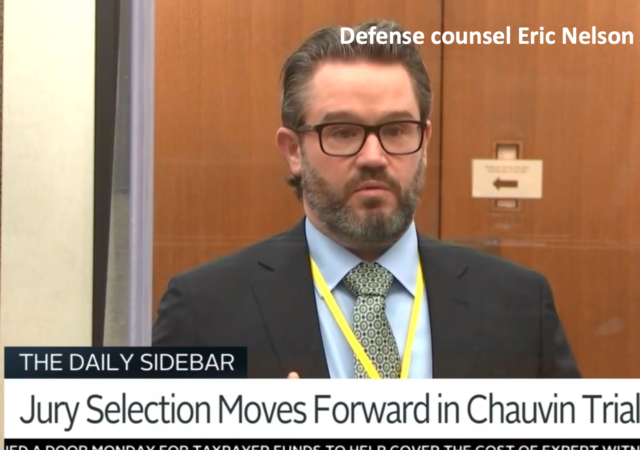 Top line: Not a single juror was seated today, leaving the number seated at nine. A total of fourteen are required, for 12 jurors and 2 alternates.

One of the outstanding issues in the jury selection process in this case so far is that the measure of what constitutes unacceptable bias seems so overwhelmingly in favor of the prosecution.

In other words, if a juror expressed in their juror questionnaire words to the effect that they cannot unsee what they saw in the video, or that the video is seared in their mind, or that Chauvin murdered Floyd, or that it would be extremely hard for them to be unbiased, fair, and impartial—one can imagine a court in which each and every one of these jurors is excused for cause, no matter what else they say to the contrary afterwards.

Instead, the standard applied to date has been essentially the opposite. No matter how firmly a prospective juror has expressed bias towards defendant Chauvin in their juror questionnaire, so long as once in court they are willing to say the “magic words” of “I will be fair and impartial,” it seems that Judge Cahill will refuse to dismiss that juror for cause.

As a result, the defense has been obliged to burn through 11 of its 15 peremptory strikes before the court seats a 10th juror, in order to prevent these explicitly biased (via questionnaire) jurors from being seated. In contrast, the state has only burned through 5 of 9 strikes.

Today, after the prosecution had to burn through two peremptory challenges to exclude two more patently biased jurors–#67 and #69 — who were willing to “say the magic words” in court, the defense finally complained to Judge Cahill.

In effect the defense argument was exactly as I’ve just stated—that it seemed jurors were acceptable to the court, and could be excluded only by peremptory challenge, no matter how blatant their bias on their juror questionnaire, so long as they were simply willing to mouth the “magic words” in court during voir dire.

Indeed, the defense urged the court to simply presume bias on the part of any prospective juror substantially exposed to media reports on the case, and make the standard that the juror essentially has to demonstrate lack of bias.

In fact, the defense requested that the judge return them the strike used on #69, just struck, because of the utter lack of credibility in their “magic words.”

Naturally, the prosecution argued that the defense was completely over-reacting, and that the only standard that mattered was, in effect, the magic words.  This was admittedly a high publicity case, the video was admittedly disturbing to anyone who viewed it, most everyone will have formed an opinion, and the legal standard was only whether jurors under oath were willing to state they would be fair and impartial—the magic words.

Judge Cahill appeared to take the criticism to heart, albeit only now after nine jurors had been seated and after the defense had used 11 of its 15 strikes, and after refusing to return to the defense the strike just used by the defense.  He indicated, however, that he would be more amenable to defense challenges for cause on subsequent prospective jurors.

Really, it seems to me, a move in the right direction, but well after the barn door has been left open.

Here’s the video, about 10 minutes or so, of this exchange between Defense Counsel Nelson, Prosecutor Schleiter, and Judge Cahill. Unfortunately, the court had the microphone turned off for the start of this discussion, so it begins mid-sentence with Nelson.

Immediately after this discussion took place, voir dire moved on to prospective juror #71.  It seems likely that Nelson timed his raising of this issue based on the questionnaire of #71, because he proved a quintessential example of a juror who professed profound bias in their juror questionnaire, only to repeatedly profess the “magic words” during voir dire in court.

The defense spent over an hour on voir dire of #71, until even Judge Cahill was frustrated with the “magic words” nonsense, and he ordered a short break in the proceedings. 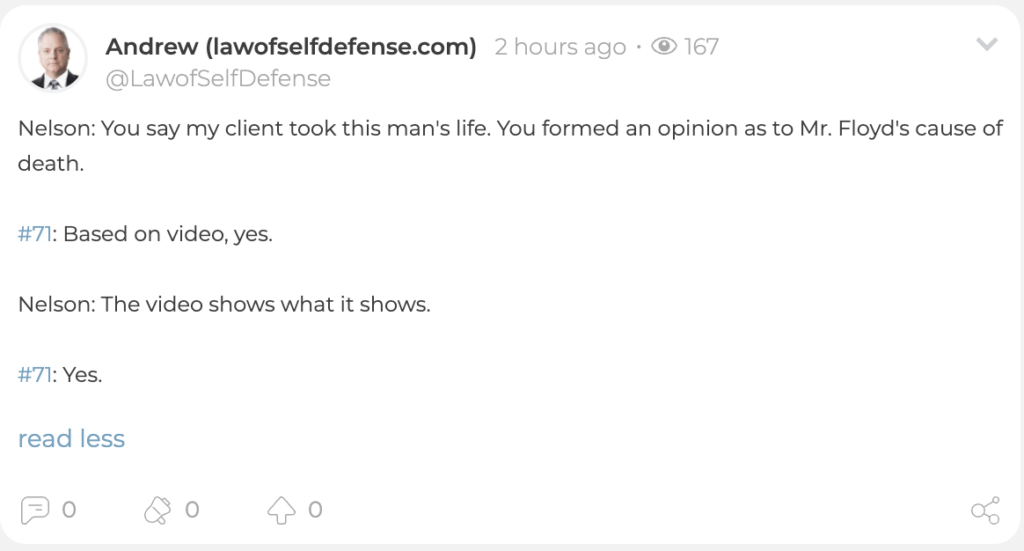 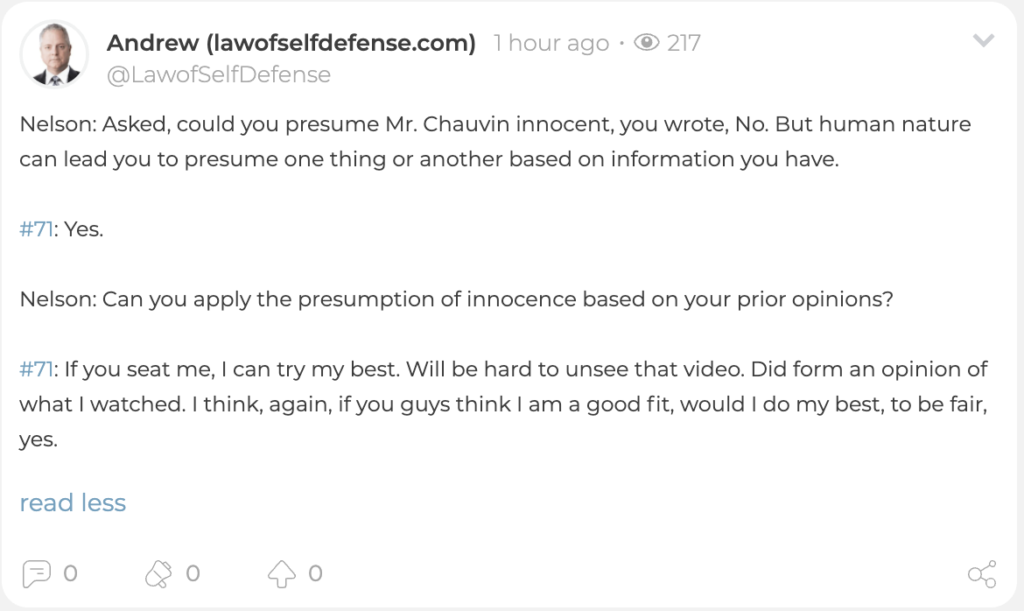 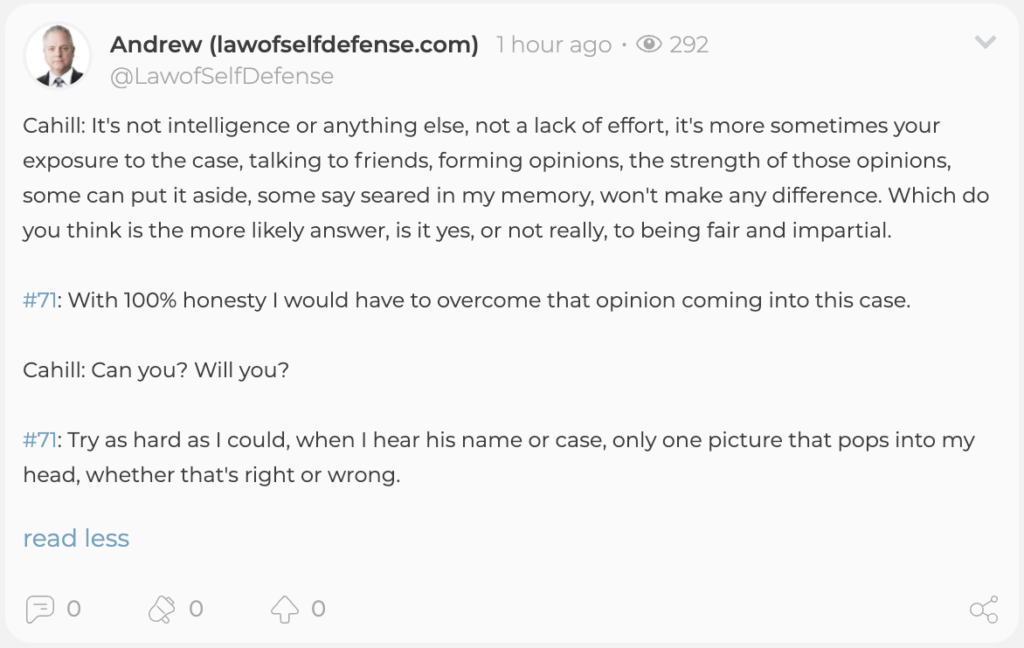 Upon return from that break, he immediately granted the defense motion to dismiss #71 for cause, using the reasoning that the defense had laid out in its argument immediately preceding #71.

Here’s that voir dire of #71, with Judge Cahill’s rather frustrated commentary at the end:

The next prospective juror was #73, the last of the day.

#73 was a self-employed male in the real estate business.  He frankly seemed a perfectly reasonable juror for this case, which meant of course that the state had to find a way to get rid of him.

The door to accomplish that revealed itself when #73 indicated that he had a friend who was a policeman, and an inclination to trust the word of a police officer more than he would trust the word of a bystander.  That was enough for #73 to get dismissed for cause, despite his protestations that he could put that aside to be fair and impartial for the state. It seems that when the bias in question is against the state, a mere whiff is sufficient to dismiss for cause. (I’ll also note that this hyper-sensitivity to the prospect of jurors favoring police testimony is usually applied in favor of, not against, criminal defendants.) 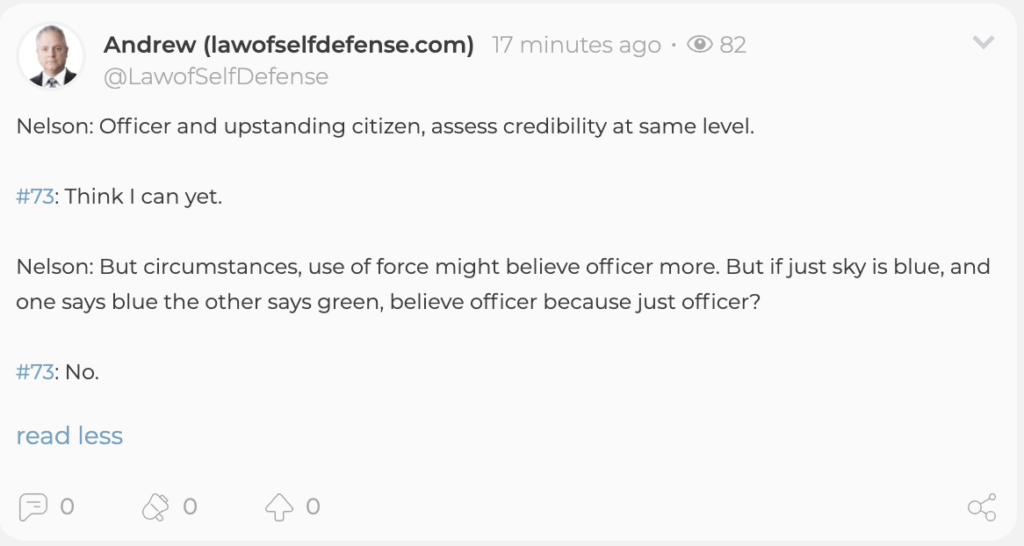 I’ll note in passing that if the standard applied to #73 in favor of the state had conversely been applied to every other juror who expressed explicit bias against the defendant, virtually every juror who has come through voir dire so far would have been dismissed for cause.

And that’s all I have for all of you today.

What is the name of the prosecution lawyer?

There’s also at least one female lawyer on the prosecution team, but they keep rotating these people through–I guess each wants their face time–so it’s tricky keeping track and knowing which are substantive contributors.

Make that at least TWO female lawyers on the prosecution team.

Wow, this judge is a joke. After they’ve been through SEVENTY prospective jurors and seated NINE, he suddenly decides maybe they should change how they evaluate jurors for neutrality?

Can a judge’s decisions in voir dire be a basis for an appeal?

“Can a judge’s decisions in voir dire be a basis for an appeal?”

Sure, but they have to be pretty outrageous for the appeal to have a chance.

At this point, there is no prospective juror who is able to consider a not-guilty verdict without thinking about the prospect of having a BLM mob burn down his house and kill his family. These jurors will do anything to bail out. The ones who have decided they are already going to vote to convict no matter what are the only ones left.

Chauvin is so hosed, and the judge is turning on the faucet.

Judge Cahill knows that the mob knows where he lives so he has to be sure to appease them.

Is this police officer, following proper procedures laid out by HIS police department, going to get LESS JUSTICE than that murderer OJ Simpson?
Have we devolved into mob justice? Then all this about “due process” and “justice is blind” is a garbage. If all depends who is in power! Uncle Joe
Stalin must be laughing in his grave! I guess BLM and its followers have decided to worship thugs instead the dream MLK, Jr. had.