Chauvin Pre-Trial Day 12: We Have a Jury, Final Juror Selected

Chauvin Pre-Trial Day 12: We Have a Jury, Final Juror Selected 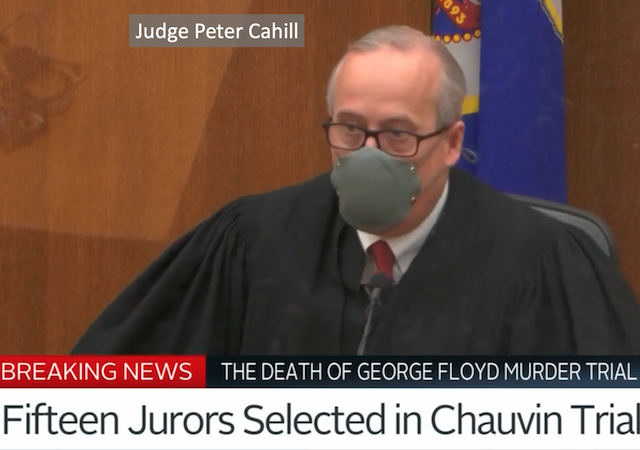 As a reminder, I am “LIVE Parlering” the trial over at Parler.com, where you can find me:  @LawofSelfDefense.

Voir dire for the murder trial of Derek Chauvin ended today with the selection of the final juror.  The trial proper beings on Monday, March 29, with opening statements at 9:00am Central Time.

I should note that there’s been some confusion about the total number of jurors selected—at least, I had some confusion.  The trial will require a total of 14 jurors, of whom 12 will ultimately deliberate, and two will be alternates.

Judge Cahill, however, had voir dire continue until a total of 15 jurors were selected.  He did so out of an abundance of caution to try to ensure that at least 14 of those will show up for court for opening statements on Monday.  Only a maximum of 14 will be sworn and seated. If all 15 show up, one will be sent home.

Time permitting, I’ll plan to do a single “Jury Overview” post providing brief descriptions of each of the selected jurors, identified of course by number, as well as the video of their voir dire.

Juror #131 is a male who described himself as an accountant (apparently corporate, not individual), married, with a puppy, who enjoys sports.

Juror #131 was surprised to be chosen as a prospective juror for this trial, based strictly on the odds given the size of Hennepin County.  Throughout the voir dire he several times described himself, or agreed to the description of himself by counsel, as analytical.  He also described himself as both open-minded—willing to consider the arguments of others—but not a pushover—willing to stick to his guns on matters he felt important.

He indicated that he had seen perhaps a 30 second clip of the bystander video of Floyd’s arrest, and that he was aware that Chauvin had his knee on Floyd’s neck for perhaps 5 or 10 minutes.  While acknowledging that he did not have all the facts, he expressed in his juror questionnaire a general sense that perhaps the duration of restraint by Floyd by police, and by Chauvin in particular, was excessive.  That said, he indicated he was open to hearing evidence at trial on police training and practices for restraint in such circumstances.

He indicated that he had little concern about personal safety associated with being a juror. This might in part be the consequence of already existing plans to move out of the state of Minneapolis at the end of May.  This trial should be well over by then so the move is not likely to affect the trial (in any case, I’d expect #131 to be obliged to delay his move).  It does mean, however, that #131 does not plan to still be living within or local to Minneapolis after the verdict is rendered.

He agreed with defense counsel Nelson that training and experience could influence how one person might perceive and event in a substantively different manner than would someone lacking such training and experience. This line of questioning is, of course, on point with why the bystander crowd so vehemently objected to the conduct of the restraining officers in general and that of Chauvin in particular.

Asked by Nelson, #131 indicated that he thought the dialogue of the protests was generally good, but that the looting and burning of the police precinct and small business owners damaged the community.

While #131 had a general sense that perhaps blacks and whites were not treated equally by the criminal justice system, and that perhaps police in general were more likely to sue force when dealing with black suspects, he strongly agreed with the proposition that the police in his community make him feel safe, and he strongly disagreed with proposals to defund the Minneapolis Police Department, stating that a police force is a necessary and integral part of society.

He would later tell Prosecutor Schleiter, however, that he might be amenable to redirecting some police department funds to more effective means of dealing with certain societal challenges, but couldn’t be specific than that.

He did express a tendency to assign some of the blame for the riots to Black Lives Matter, although he still viewed them somewhat favorably.  Despite his favorable view of police generally, he had a neutral view of blue lives matter, because he felt they didn’t do enough to advance racial equality and gun control.  Asked what more he would expect blue lives matter to do, he was unable to be specific.

Prosecutor Schleiter, following up on #131’s self-description as a sports fan, asked him for his views on players who kneeled during the national anthem. He responded that he would prefer players to find an alternative means of communicating their views, and expressed respect for the United States and pride in being an American citizen.

Ultimately, #131 was passed for cause by both the defense and the state, meaning he was acceptable to both as a juror, making him the 15th and final juror selected for this trial. (Again, as noted above, only 14 of those 15 will actually be sworn and seated as the jury for this trial.) 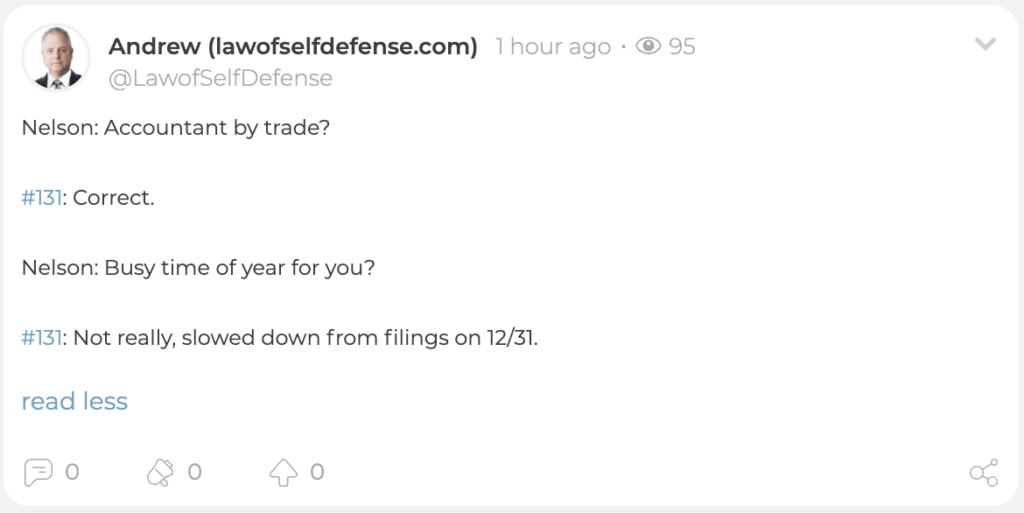 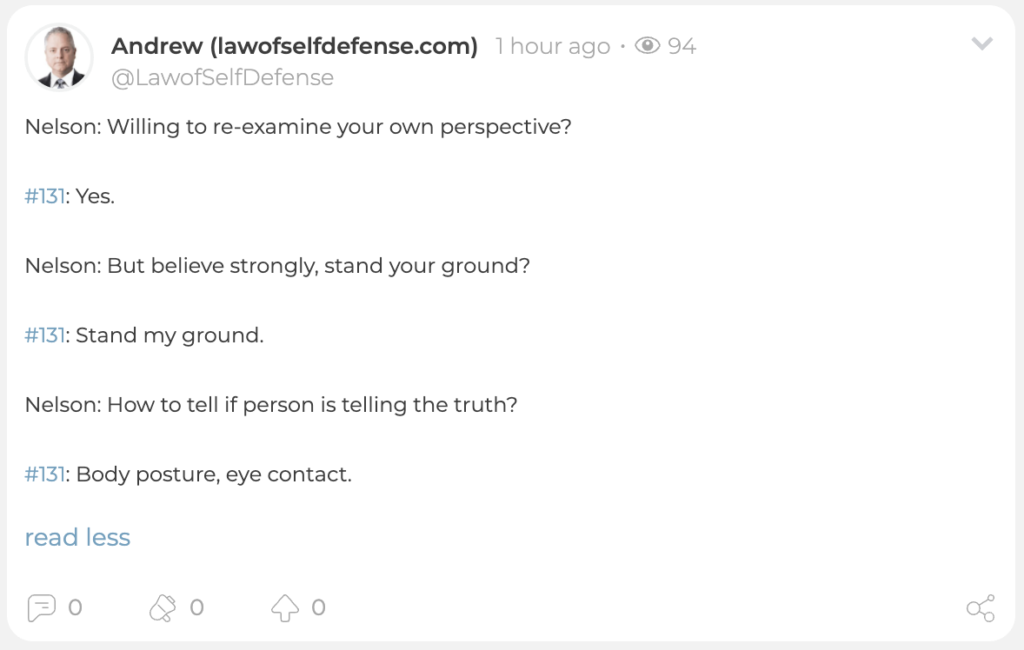 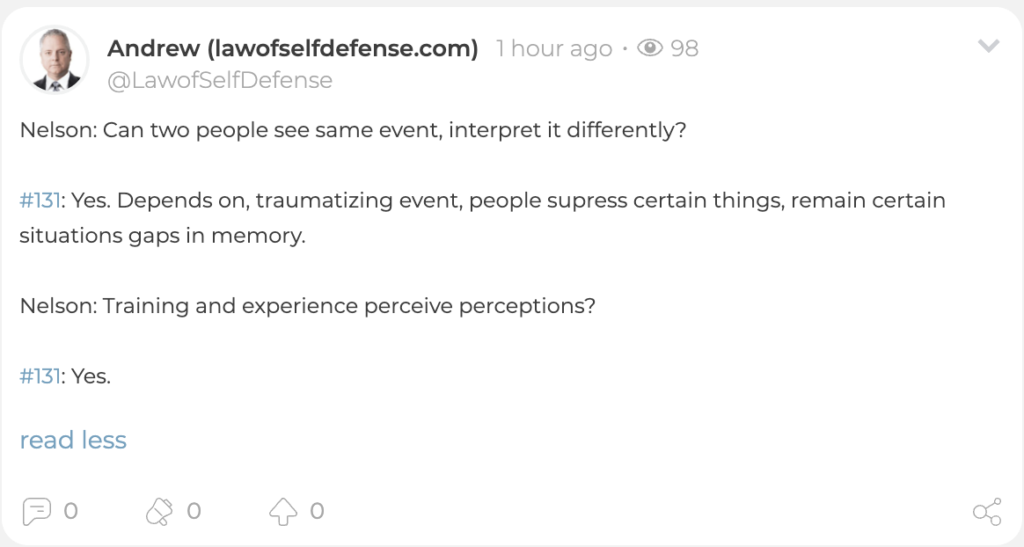 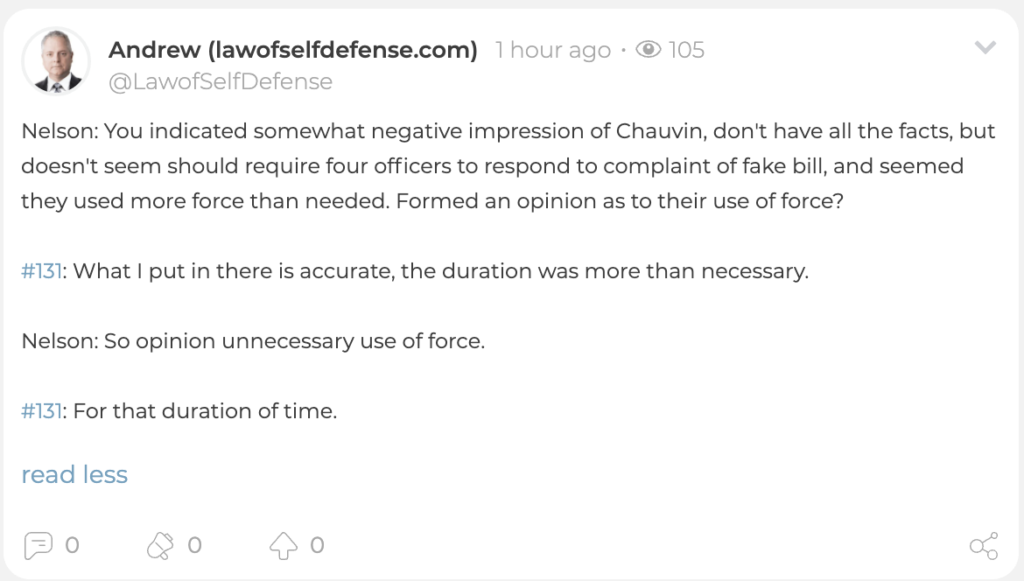 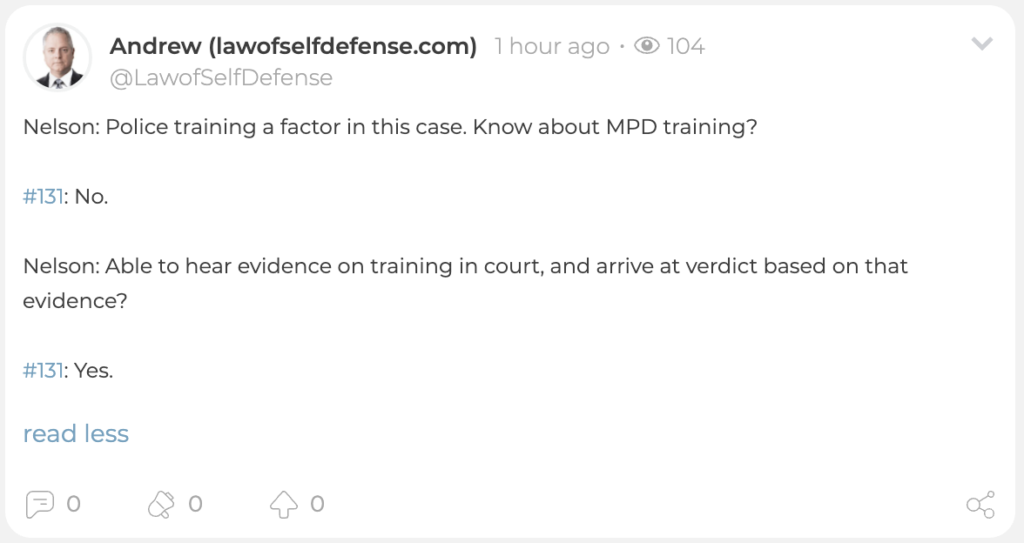 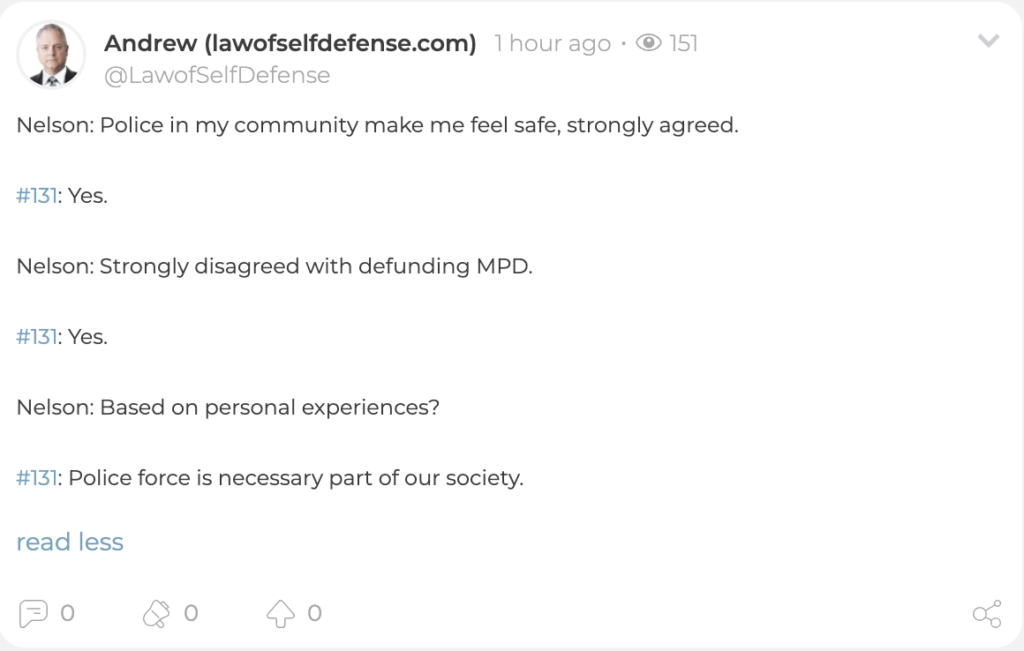 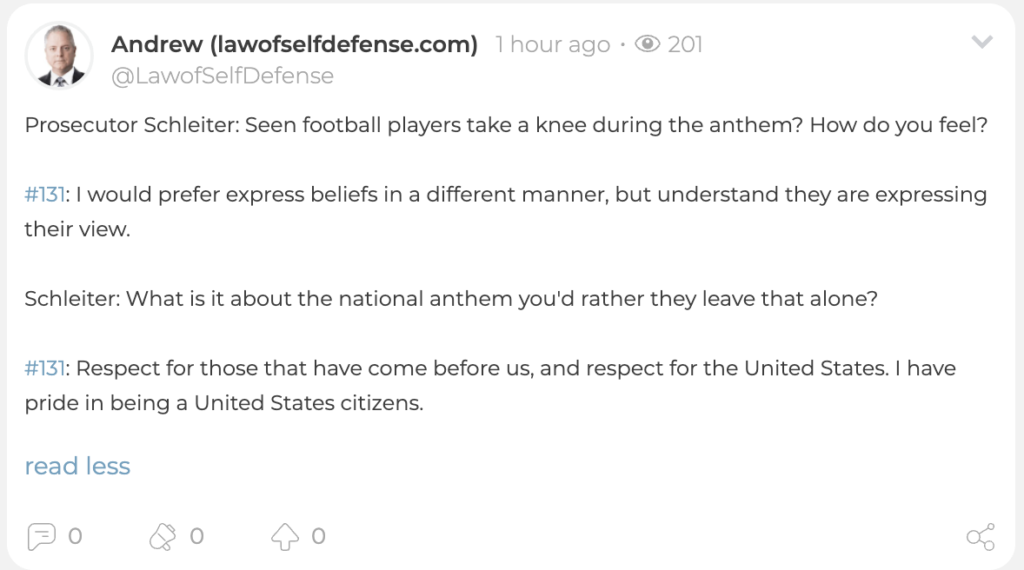 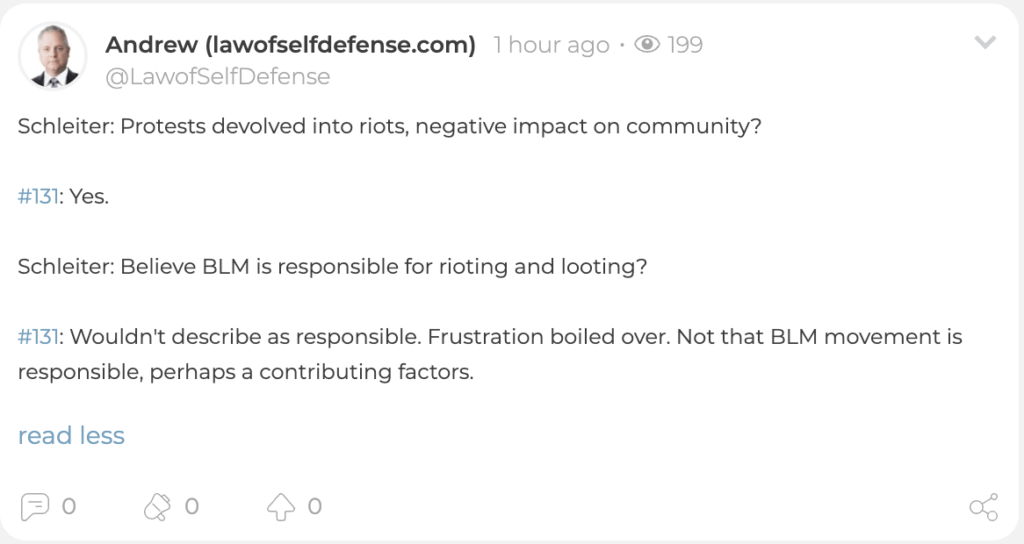 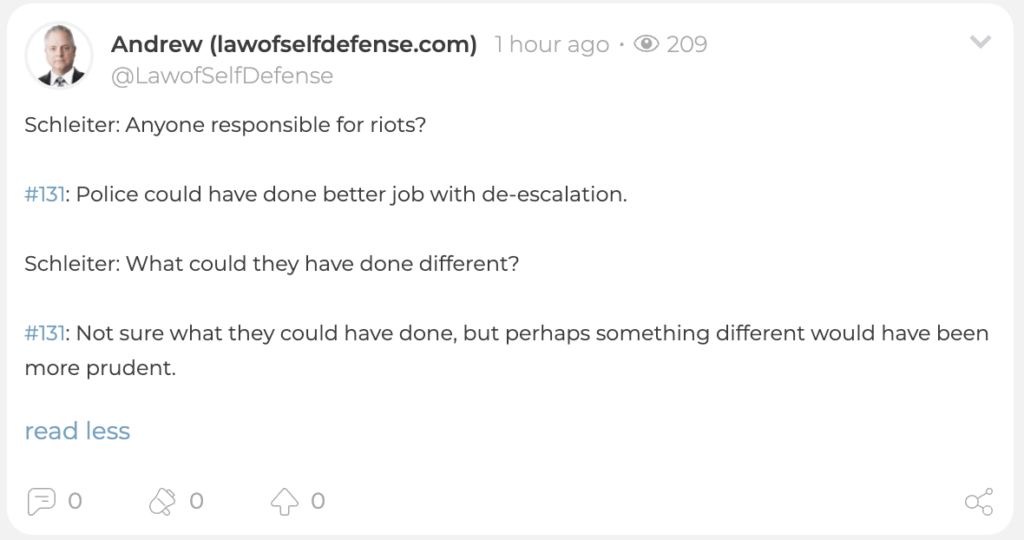 Did the prosecution pass on the 15th juror because they already had the guilty verdict locked up with the first 14? would seem so

That makes no sense, since they don’t know who the final 12 will be, and they need ever single one of those 12.

I could be wrong, but I thought the jurors would be seated first in, first out, ie the first 12 are in, then next 2 are the alternates and the 15th is a throwaway if the first 14 show up ( are not struck for misbehavior. If the 12 are selected out of the 15 randomly, then yes.

Even if it were the way you suggest, they still have no way of knowing whether one of the first 14 will be a no-show, so they can’t afford to throw away the 15th.

But how is it actually done in Minnesota? I don’t know, but it is an interesting question and there are different ways it’s done in different places.

,”Juror #131 is a male who described himself as an accountant (apparently corporate, not individual), married, with a puppy, who enjoys sports.”

Being serious for just a second: how do they determine which is the one juror too many,?

,”Juror #131 is a male who described himself as an accountant.

personally – I am very surprised an accountant got on this jury – same with engineers. They are too analytical, not easily swayed by emotions.

How do they decide which juror would be dismissed if all 15 show up on Monday?

Is it last in first out meaning juror 131 would be let go or do they do something else?

I was once selected as an alternate juror in Santa Clara county, California. The first 12 were the actual jurors and the last two were alternates. I don’t know if the same rule applies in Minnesota.

Oops. Actually, now my recollection is that he’s moving out of Hennepin County. I’ll have to check my notes.

Update: Moving out of state is correct, I’ll adjust the post content accordingly. Thanks for the heads up.

The prosecutor seriously asked him why he got a puppy?

Thanks Andrew for taking one for the team, I would have clawed my eyes out trying to slog through all of this.

It seems odd at this juror does not consider the fact that the resisting arrestee is the one that determines the duration of the use of force. When he stops resisting, the fight is over. Application of force after submission/restraint is that “excessive force” the left likes to claim all the time….

“Ok, laddies, this has gone on for a couple minutes and no progress…. Let him go.” You won’t find that in the training literature.