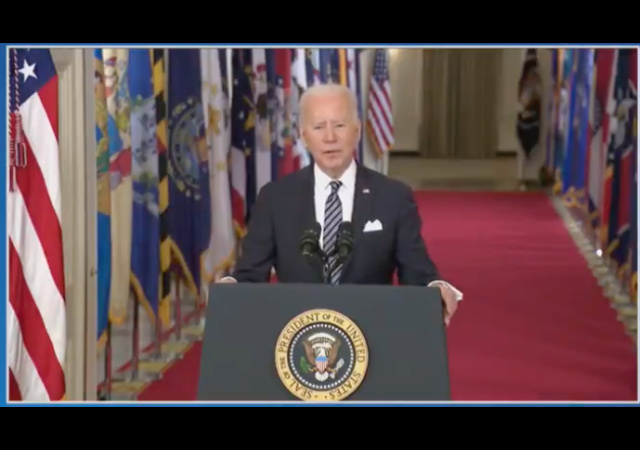 Bloomberg News learned President Joe Biden wants to include the first big federal tax hike since 1993 to pay for future “projects” he has planned for his administration.

Biden and the Democrats also want to raise taxes in the name of fairness.

“His whole outlook has always been that Americans believe tax policy needs to be fair, and he has viewed all of his policy options through that lens,” said Sarah Bianchi, head of U.S. public policy at Evercore ISI and a former economic aide to Biden. “That is why the focus is on addressing the unequal treatment between work and wealth.”

While the White House has rejected an outright wealth tax, as proposed by progressive Democratic Senator Elizabeth Warren, the administration’s current thinking does target the wealthy.

But Democrats love to spend your hard-earned money! They passed the $1.9 trillion “COVID relief” bill, which spent more on pork than providing actual assistance to the taxpayer.

The projects will likely include “infrastructure, climate and expanded help for poorer Americans.” After what we saw in the COVID bill how much do you want to bet the latter will get the short end of the stick?

Sources said Biden wants to stick to his 2020 campaign promises. That includes repealing parts of the 2017 tax breaks benefitting “corporations and wealthy individuals, as well as making other changes to make the tax code more progressive.”

People told Bloomberg these items are in the proposal or might be added later:

I hate to assume anything about a non-existent spending bill, but these numbers seem about right. It wouldn’t shock me if they underestimated the costs:

An independent analysis of the Biden campaign tax plan done by the Tax Policy Center estimated it would raise $2.1 trillion over a decade, though the administration’s plan is likely to be smaller. Bianchi earlier this month wrote that congressional Democrats might agree to $500 billion.

The overall program has yet to be unveiled, with analysts penciling in $2 trillion to $4 trillion. No date has yet been set for an announcement, though the White House said the plan would follow the signing of the Covid-19 relief bill.

The Democrats need 10 Republicans to pass the bill “under regular Senate Rules.”

The Omnibus Budget Reconciliation Act of 1993 only passed because Vice President Al Gore broke the tie in the Senate. It increased the income tax rate to 39.6%, corporate income tax rate, fuel taxes, etc.

Anyone else experiencing this?

I use Brave too, but on the desktop, and am noticing no slowness.

Yes, thanks. Seems to be okay on my Windows 10 desktop, a relatively new machine (using Firefox browser).

I get 4 black boxes on a greyed out background, almost as if there is some kind if check going to make sure in a legitimate user. Bloody annoying.

It is. I suspect this will be addressed as soon as possible, though.

Government Greed is rearing its ugly head again with the Clueless Joe administration. Government is not getting their fair share of your earnings to waste on their stupid, unproductive projects such as infrastructure and “climate change.” They are very efficient at p!ssing other people’s money away to reward their friends, supporters and family. Resist like it is 1776.

The difference is capital. Somebody bought heavy equipment with capital.

The ones with extra money are the rich.

Some rich guy figured out a way to make a ditch-digger more productive than he had been, to make himself richer.

But it also makes the ditch-digger richer.

The extra ditch-digger income is trickle-down.

Trickle-down is not dimes falling from the pockets of the rich but the return to wisely used capital.

When you tax the rich more, their living standard doesn’t change. Rather, their investment declines. The extra money goes first.

Think of capital, extra money, as seed corn. Seed corn is extra corn that’s not eaten. It’s what gives you much more corn next year.

Taxing away the seed corn to distribute it as food is disastrous.

If somebody says, “At some point, you have enough money,” he doesn’t understand that money beyond enough money is the seed corn.

This is a China bill so companies now leaving China will return.

What is absent here is the reinstatement of the State and Local tax break for the wealthy. That will be slipped in at the 11th hour, no doubt.

Where is the “big guy” tax for deals with places like China?

Seems like the Dems are so intent on taxing and bilking the US economy, but have no plans to go after their corrupt deals overseas.

Also, all of this government grab will basically take a decade to generate part of what was already spent on the Porkulus fake COVID bill? Talk about an underwhelming number.

Biden propaganda obfuscates the issue. Essentially Biden tries to have his cake and east it too. And media sells the BS.

It goes like this – taxpayers need a break so Biden proposes to flip a coin because “fairness” = heads the government wins; tails taxpayers lose.

How about instead we:
1. Create a minimum tax rate of 5%
2. Reform capital gains and dividend, interest and other ‘passive’ income so that:
A. Exempt the first $15,000
B. Tax amount above that at normal income tax rates
3. Require filing of federal tax returns; no more exemption for people over a certain age

Those items would ensure that everyone is filing and paying a minimum of 5%. Unity?
It would also protect smaller investors while treating income from capital the same as income from labor above the $15000 level.

If the Dhimmi-crats want to tax about tax fairness and unfairness, let’s talk about the top 10% or 15% of earners (or, whatever the exact number is) paying 45% or 50% of the total income tax burden, while 40% of the population or so pays nothing, or, next to nothing.

Funny how the Dhimmi-crats talk up the “fairness” issue, but, always omit mention of who’s actually paying up, and, who isn’t paying.

In some jurisdictions, more than 50% of voters pay zero tax. The politicians know this. Over the years – they created this. Now the election winner is simply whoever promises the most free stuff. Liberal win at that game everytime. Marxists love it – it plays into their lie that everyone can get what they want.

It’s a rigged game. It has been for years. We are now suffering from years of political and civic malpractice. Democracy has become a convenient façade.

Taxpayers are the modern slaves. The government plantation (federal, state local) takes up to 40% of your hard earned income. Biden wants that to go up to 50% or more.

Those dependent upon the government checks are like crack addicts. They are enslaved in a different way. They will never be productive members of society and any jobs they might have taken are filled up by illegal immigrants who work for less than the after-tax amount that a welfare recipient gets from the government. So they are trapped like a bird in a gilded cage.

You don’t have to be an economist to see that this model is unsustainable and fiscally unhealthy, besides being inequitable. A healthy tax base doesn’t consist of 10 or 15% of the population paying close to half of the tax burden, while 40%-plus of the freeloaders pay nothing. This is what’s happening in every heavily-populated, Dhimmi-crat-managed state. And, it’s a recipe for fiscal disaster.

What you describe is called Commienomics. It is carried out by Democrats in order to acquire the votes of the ignorant class (I know, that also includes Congressional Democrats). If you say Flat Tax, they scream. They talk about Fareness in taxes. There is absolutely nothing fair about their fareness!

When I did my taxes last month, for tax year 2020, I calculated my entire tax burden, across all jurisdictions — federal, state, & local income taxes; real estate taxes; Social Security and Medicare deductions. Not including sales taxes, or, the healthcare premiums that I pay (which have been hugely inflated by Obomacare’s mandates, and, are a virtual tax), my cumulative tax burden was approximately 33%. My income was just under six figures.

One-third of my income going to the Man. Outrageous.

I thought Modern Monetary Theory says we can borrow all we want because we owe it to ourselves. Cancel all taxes and print what we need.

Borrowing is the opposite of printing. Borrowing takes out of circulation the dollars it then spends, leaving the original guy holding US treasuries rather than money.

My wallet just made a squalling noise like a goose when you steal her golden eggs and buy crap with the money.

Gee, it is apparent that Biden’s puppeteers want to drive business offshore to the Asian realm. Wonder why?

Guys, one thing occurs to me. The traditional r response to tax goes is ….basically what is posted; traditional economic argument regarding mobility of capital ECT. The largest beneficiaries of this response are the oligarchy wannabes who opposed DJT and backed Biden.

Why do we want to save them? The d want taxes on the highest earners and the super wealthy. These folks kicked MAGA policies to the curb. Let them figure out how to save themselves. IMO, this is a good opportunity to send a ‘shot across the bow’ of the oligarchy; every r should.simply vote ‘present’ on an up or down tax hike for the ‘wealthy’.

Agreed, tax the oligarchy into the dust bin oh history. Wealth tax time. Let’s give them their progressive wish – no one serves to have more than a billion dollars. And that includes wealth in trusts controlled by the oligarchs. They despise and hate you, and using their wealth to oppress you. They are you enemies. Take it all. Give it to the people. Make them live in a mobile home in Kansas.