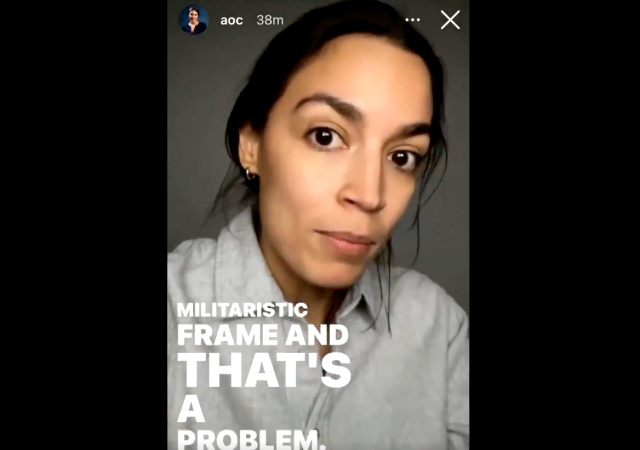 Rep. Alexandria Ocasio-Cortez made a huge deal about “kids in cages” and supposedly wept at the border during President Donald Trump’s administration.

Someone called out AOC’s recent silence on the situation on Instagram Live. She snapped.

It’s a crisis of all sorts, but not a border crisis.

She initially appeared outraged when asked during an Instagram Live ask-me-anything session why she was “not addressing the border crisis and the kids in cages like you used to” — asking after a pause, “Are you for real?”

“It’s not a border crisis. It’s an Imperialism crisis, it’s a climate crisis, it’s a trade crisis. And also it’s a carceral crisis,” she said, without directly addressing the kids-in-cages allegation itself.

It gets better. AOC tried to change the definition of “surge,” which is something leftists do well:

“They wanna say, ‘But what about the surge?'” Ocasio-Cortez said on Tuesday night during an Instagram Live session. “Well, first of all, just gut check, stop. Anyone who’s using the term ‘surge’ around you consciously is trying to invoke a militaristic frame.”

“And that’s a problem because this is not a surge, these are children and they are not insurgents and we are not being invaded, which by the way is a white supremacist idea-philosophy, the idea that if another is coming in the population that this is an invasion of who we are,” the congresswoman continued.

Oh, how I love it when they use the same old dog whistles. I wonder what term they’ll use after they water down “white supremacy” as they did with racism.

It’s so weird. You look at the definition of surge, and, well, it does not fit with AOC’s ramblings. I cannot believe people just eat this up without questioning her.

“Anyone who is using the term ‘surge’ around you consciously is trying to invoke a militaristic frame… This is not a surge. These are children and they are not insurgents.”
pic.twitter.com/vUjraUSNHr

Try talking to your boss, lady. He describes it as a “surge”.

This woman makes a goldfish look like a Rhodes Scholar.

Days like this I wish she’d soak her head in a bowl of water….

If she doesn’t like use of the word “surge” to describe this situation, which word would she prefer, and why?

I don’t care why she thinks there is a crisis, or even if there is a crisis. I want to know why she hadn’t put on her white pant suit, red lipstick, and gone to the border to cray about Biden’s concentration camp like she did under Trump.

If Trump’s kids in cages was worth attacking, Biden’s is 10 fold.

Also, anyone with a brain could see Biden rescind every Trump executive order and deal. Biden built this crisis.

How about Titanic surge?

That gives me a sinking feeling…

Blasting, billowing, bursting forth
With the power of ten billion butterfly sneezes

Control the language… and then you control the people.

That has gone on for as long as I can remember. I was in Kindergarten, or at most 1st grade when our janitor became a custodian.

I also remember Negro as a neutral word. We were then told it was not nice. So, with race hustlers pulling the strings, whites danced to their tune.

Dance to those strings, yessir.

The Left alters language because language matters. Language conveys ideas. If you can control language, you can limit ideas. If you can limit ideas, you can promote your own more effectively because they will have less competition from other ideas. In the intellectual battlespace, ideas are weapons. Ideas are built with language. If you can alter language, you can reduce the range and effectiveness of your opponents’ weapons in the battlespace.

This is how the Left is replacing reality with their narrative in spite of having less effective weapons – they have neutralized the weapons of their opponents.

They do this because they know they would otherwise be losers in the intellectual battlespace. They are attempting to unilaterally impose “arms control” upon their opponents.

Are there really people who take anything seriously that spews from the gaping pie hole of this useless, idiotic brat?

“I was SO TRIGGERED the last time I went to the beach! The tide SURGED at me! I had to run to my safe space and cuddle my blankie.”

AOC is such a fucking moron.

What about the incessant harping on “COVID surges” and the attendant scolding from the Left??

So that surge of electrons that came out my wall socket in a thunder storm and blew up my computer was a military attack .

You forgot the lime in my drink, honey.

This little ding dong is the sort of airhead that gives all the other airheads a bad name. What an idiot!

She makes blondes into MENSA candidates by contrast.

carceral
Huh?! I doubt that’s even a word. (Though dictionary.com might have added it by the time I hit “Submit” on this.)

Imperialism crisis
Right, because they’re invading our home and establishing their culture here.

just gut check, stop
Huh? A gut check iswhether you have the nerve to go on. So there shouldn’t be any stopping (unless you fail it). She can’t even speak American.

this is not a surge, these are children and they are not insurgents and we are not being invaded
And what do those disparate bits have to do with each other? Holy moley!

With due apologies to hammers and rocks, this woman couldn’t measure up to a bag of the first, nor a box of the latter.

She probably made up the word carceral extemporaneously, and intends it to be a derivation of incarcerated. She’s obviously not skilled at speaking extemporaneously (as if we didn’t already know this).

Oddly enough it is a word. At least it is according to Merriam-Webster

carceral: of, relating to, or suggesting a jail or prison

A testament to a Boston University degree these days.

Boy oh boy….she has achieved “D-Rock” status.
She’s as dumb as a rock!

Reminds one of the dead parrot sketch. ‘Its only stunned”

If we call them “invaders” instead, could we say “surge?” Would that be better? And, yes, we are being invaded.

One has to wonder if Hitler made a mistake by militarily invading neighboring countries when all he had to do was encourage mass, illegal migration into them by German peasants, and eventually take them over through a change in demographics. And the rest of the world would have demanded that the migrants be taken in, as they could have claimed to be refugees fleeing a tyrannical government (as well fleeing a disastrous economic situation, for which France and Britain could be blamed due to the imposition of the Treaty of Versailles).

Shows just how low a liberal IQ can be when she confused surge with insurgency.

Perhaps I’m giving her too much credit (likely), but I think she is referencing the military surge in Iraq under President Bush.

This dim wit actually thinks that the word surge is the base word for insurgent. And the brain dead youngsters that champion this intellectually challenged woman cheer her on. Our country is well and truly F’d.