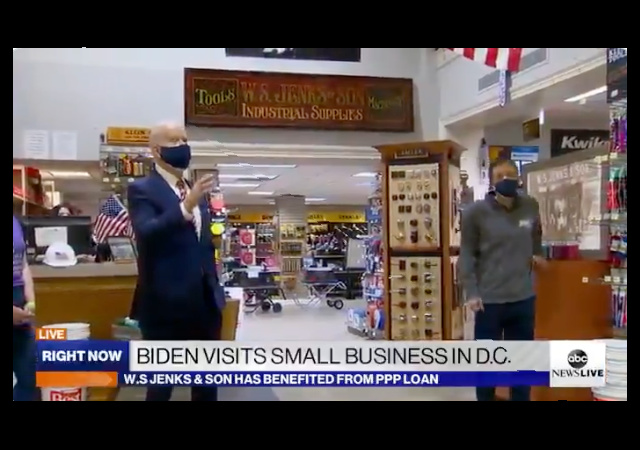 President Joe Biden’s aides moved him along at a hardware store so the White House press corps could not ask him questions. Biden did not even try to answer any question thrown at him.

The aides even yelled at the press to go away while others led the reporters out of the store.

The owners gave Biden and his aides a tour for about 10 minutes. Biden provided a few remarks but did not answer any questions. Most of the questions centered around the supposed “non-border crisis” at our border.

Biden has not given a solo press conference in 48 days. The 15 presidents before him provided one at least 33 days into their term. That’s a span of 100 years.

Immediately after, handlers for the 46th president began yelling back assertively, “Come on, press, you gotta go,” as the entire gaggle of reporters was quickly removed from the scene.

Biden, who was standing about 15 to 20 feet away from the press pool, did not flinch or answer a single one of the myriad shouted questions, including one on the burgeoning immigration crisis at the southern border.

Press Secretary Jen Psaki said Biden is “too busy managing the ‘historic crises’ linked to the COVID-19 pandemic.” She pointed out he has answered questions but wants to focus on the recovery.

Yes, Biden spoke to reporters after making statements or before boarding planes. But even then he might only answer one or two. His answers usually float under the sounds of his aides rushing the press out of the rooms.

Psaki mentioned a press conference “in the coming weeks before the end of the month.”

Slow Joe can’t even field softballs from his adoring lapdogs. It’s not like the propagandists wouldn’t explain what Biden “really meant” anyway.

Softball? No, if the press were allowed to ask questions, it would something like….

Reporter 2: Mr. President, how can we thank you from saving the world from Trump?
President: What the? Where is… I know I saw it…. maybe…. no, not there….

Reporter 3: You are so sexy! Would you like to sniff me? And maybe a little grope, too.
President: Yeah, it sort of…. sort of… C’mon man! You just had it…. you know, the the thing!

Reporter 4: Mr. President! Do you think we should try and re-educate Republicans, or is it a totally lost cause and we should just start killing them all?
President: I thought…. Yeah, that’s it. It’s….no, no….Maybe, OK, yeah, yeah.

p. Hey, MSM, THIS IS YOUR GUY! Foisted onto all of us. Happy now?

They’re still trying to get the speaker synchronized with the movement of his mouth.

It should be easy; Disney’s crowd did it for Lincoln over 50 years ago.

And yet the media is not foaming at the mouth like they would if it was Trump blowing them off like Biden and his cronies did.

Like the new site but it scrolls way too fast. A light move of the mouse and it’s like going to hyperspace as the site rolls by. Needs to be slowed down just a little bit.

Same for me, scrolling is quite fast for an older user.

Thanks for pointing this out. I thought it was my computer, had no luck adjusting the mouse speed.

Was Biden whisked away or were reporters pushed out?

His cerebrovascular accident will happen about 24 hrs before the “scheduled” press conference.

I ran into an Oberlin alum on the street the other day, and during the conversation mentioned that Biden had not done either a State of the Union address or a press conference. I was assured that this was because Biden was spending all of his time trying to fix the mess that Trump left the country in.

Upon hearing this, I am no longer surprised that Hitler came into full power, but am surprised that it hasn’t happened more often. Just so many people living in open aggressive denial.

It’s not mere denial. People acting likr that have an agenda. It’s usually infantile narcissism (“Me The great me? Wrong? NEVER! NEVER! WAHHHHHH!.!!!…..”)

At least Hitler had actual results for starving germans BEFORE complete Nazi evil was unleashesd. Idiots like your Oberlin acquaintance is analogous to a German supporting the Weimar republic after Hitler brought Germany off its knees – and his.support of Weimar having nothing to with Nazi evil.

And Adolf had what I hope we won’t see in any way, shape or form – runaway inflation. By (IIRC) 1932 inflation in Germany was so bad that a loaf of bread cost the same number of marks as all the marks in circulation in 1927. That’s just an astounding data point. It would be like a loaf of bread six years from now costing many trillions of dollars.,

But yes, these people buy the propaganda just as Herr Doktor Göbbels predicted and proved.

Hitler never dealt with hyperinflation. That’s a myth. The Weimar government broke the cycle with a hard-nosed currency reform in 1923, a decade before Mustache Man rose to power. He was helped quite enough by the Depression and Versailles.

His cerebrovascular accident will happen about 24 hrs before the “scheduled” press conference.

Nah, I’m betting that Joe is going to have an “unfortunate accident” involving his dog and a long staircase that is going to incapacitate Joe for a very long period of time if not permanently. (They’ve already tried once with the dog and all Joe got was a twisted ankle. I’m guessing the second time round they’ll make every effort it works as intended.)

The dogs are back in Delaware after biting a Secret Service person. They probably have something else up their sleeves!

“because Biden was spending all of his time trying to fix the mess that Trump left the country in.”

Is he doing it via astral projection, during all those nap periods?

They’re shielding Biden from calls to resign until on or after January 22 2023. They’re aiming at holding the White House for 10 years.

It doesn’t matter. The sinister and corrupt Susan Rice is in charge.

Poor Joe. You can never find Edith. Wilson when you.really need her.

That Susan Rice is in charge is exactly why Joe has to hang on forever. They’ll embalm him and use animatronics if necessary.

Turns out that Ms. Rice and the accidental Vice President, Ms. Harris, really, truly do NOT like each other. Should Ms. Harris become president, Susan Rice will be out in the first 24 hours.

So we’re stuck with Joe, whether he’s alive or a zombie.

Should have just pushed a cardboard cutout around the place. Would have been much more lively and have an excuse for not answering questions.

If we’re going to have a cardboard-cutout president hanging out at hardware stores, couldn’t it at least be Mike Rowe?

Rowe has at least acomplished something.

I haven’t been really all in on the senility / conspiracy theories going around, but the moment they shouted at the reporters, the vacant / confused eyes of Biden, I don’t think he knew right then where he was or what he was doing.

Look at his body language and his eyes. He seems confused. He shuffles his feet, hunched and darts his eyes back and forth like he’s lost and waiting for somebody to grab him by the elbow and point the way. My father is an 88 year old stroke survivor and this is exactly his posture and mannerisms.

And indeed there is a hand in the foreground abortively reaching out to steer Biden in the proper direction, but its owner doesn’t dare actually touch him, and apparently they forgot to bring along any of the few people who are permitted to touch him. What a clusterf*.

So he’s too busy with covid but wandering around a hardware store?

Did he use too much to again or try to flush a depends and have to buy a plunger?