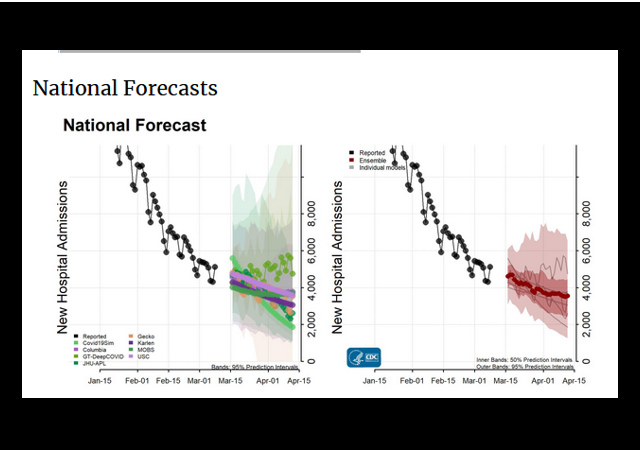 A year ago, President Donald Trump essentially shut-down the country for two weeks to “flatten the curve.”

Americans were given to understand that the real goal was not to swamp the hospital system with critically ill patients. Considering citizens give selflessly of themselves during emergencies, most of us were willing to sacrifice for 14 days in hopes that fatalities would be reduced.

Fifty-two weeks later, I think it is an excellent time to ask the question: When can we declare that the pandemic is over?

Unfortunately, the experts are not clear on the parameters that are to be used. However, as we have experienced “flu pandemics before” yet still have flu cases, it might be time to evaluate how close we are to the end of the coronavirus pandemic.

The facts are undeniable: The seven-day average of new cases in the United States has fallen by 74 percent since their January peak, hospitalizations have gone down by 58 percent, and deaths have dropped by 42 percent. Meanwhile, more than 60 million doses of vaccine have gone into American arms. At some point—maybe even some point relatively soon—the remaining emergency measures that were introduced in March 2020 will come to an end. But when, exactly, should that happen?

The problem is that the “end of the pandemic” means different things in different contexts. The World Health Organization first declared a “public health emergency of international concern” on January 30, 2020, holding off on labeling it a “pandemic” until March 11. The imposition (and rescinding) of these labels is a judgment made by WHO leadership, and one that can reflect murky, tactical considerations. Regardless of what the WHO decides (and when), national governments—and individual states within the U.S.—have to make their own determinations about when and how to reopen their schools and loosen their restrictions on businesses.

Perhaps it is now time to start forcing experts to define realistic infection and hospitalization numbers. According to epidemiologists, three parameters are key in this analysis:

A variety of metrics could indicate that the country is getting the pandemic under control, including the number of new daily cases and the number of deaths. But epidemiologists say three specific metrics are required to get a clear understanding of the country’s overall response: the number of COVID-19-related hospitalizations, the virus’s so-called reproduction number and the number of vaccinations administered.

Looking at hospitalizations, the news is very encouraging. These are the latest numbers from the Centers for Disease Control and Prevention (CDC):

The state- and territory-level ensemble forecasts predict that over the next four weeks, the number of daily confirmed COVID-19 hospital admissions will likely increase in 2 jurisdictions and decrease in 22 jurisdictions, which are indicated in the forecast plots below. Trends in numbers of future reported hospital admissions are uncertain or predicted to remain stable in the other states and territories.

The reproduction number represents the potential for one sick person to spread the infection.

The lower the number, the better — and less than 1 is best.

The news here is very good. A detailed analysis of the country shows that most of the reproduction numbers are below 1. 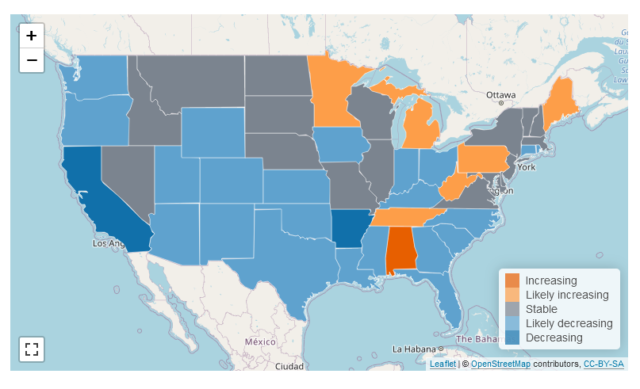 Here are some specific numbers from the analysis of the reproduction number nationwide, and arguably, they make a strong case that the end of the pandemic in near. 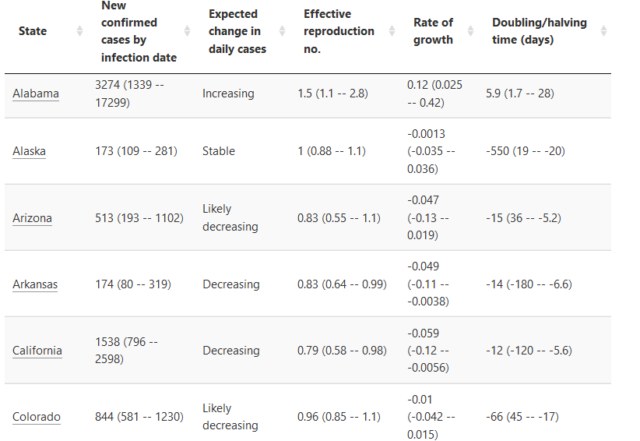 Finally, a look at vaccinations across the country shows that the successful program is making a serious dent in coronavirus infections and their impact.

In the first month of the rollout, an estimated 78 per cent of nursing home residents were vaccinated, according to a study last month by the CDC. Since then that number has continued to rise, according to those working in the sector, who say they think that in many homes almost all residents have now received at least one shot.

In the following two months until the end of February, cases among nursing home residents dropped 96 per cent, while deaths fell 87 per cent.

During the same period, cases among people aged 18-54, the least likely group to have been vaccinated, fell by 72 per cent, while deaths dropped by 80 per cent.

Over 110 million doses of the vaccine have been distributed. And while the press may try to gin up panic about “variants,” indications are that the vaccines are also effective against them. Furthermore, up to 16 million Americans already have acquired immunity by getting asymptomatic cases of COVID-19.

In conclusion: If we focus on the epidemiological parameters and not Dr. Anthony Fauci’s interviews, it is clear that serious-minded policy makers should expect to declare the end to pandemic-level protocol soon…perhaps as early as April, as has been suggested by a professor at the Johns Hopkins School of Medicine.

Only one state shows increasing. When the red and orange are gone from the map, that might be a good time to say we have the virus under control. Summer’s coming which means people will spend more time outside.

We have always been at war with COVID-19.

When will the restrictions end? The word you are looking for is “never”.

Get ready for global warming/climate change lockdowns, dictatorial restrictions to fight imaginary “epidemic of gun violence” and “epidemic of white supremacy”. A sizable portion of the American public has already shown that it will not only gleefully embrace such totalitarian measures, it will act as enforcers and snitches. No genocidal dictatorship can exist for long without the active support of the Karens who decide they wanted to “make the world a better place” by tormenting and exterminating the parts they hate.

It will never be over. “It’s a new world.” This never was about fighting a disease. It’s always been about seizing more power to control people. Remember, we still remove our shoes before boarding planes. The government has more power than it did a year ago. Does anyone expect that power to be returned?

It absolutely astounds me how many people act like “the left” is well-intentioned but mistaken. The data doesn’t matter because the data never mattered to them.

We have to stop pretending our domestic enemies are acting in good faith.

“When can we declare that the pandemic is over?

I have already done so.

I”m much too old to wait for somebody else to “give me” my freedom, and much too experienced to believe that approach is ever effective.

Ah, such optimism. The pandemic will never end and the restrictions will never be lifted. Because now we have to deal with all those never-ending “variants” of the Covid™. The South African variant (COVID-19 variant B.1.351 ) the U.K. variant (B.1.1.7. coronavirus) and all the other “variants” that they will find in the future must be dealt with with overly restrictive lockdowns and further erosion of the rights of the citizen to life, liberty and pursuit of happiness.

And if you don’t believe me look what’s happening in Michigan as the precursor to the rest of the country.

It’s never gonna end, folks. It’ll just be chasing one variant after another.

Six months, depending on your relative latitude, and local climate, the pandemic starts anew. Don’t forget your mask and goggles. How many people wear goggles? They eyes are a window to social and viral contagion.

Oh, and asymptomatic fecal transmission. Wash your hands, and be wary of back… black holes… whores h/t NAACP.

For the most part – the infection rates have been following the hopes-simpson curve. Based on the history of the hopes simpson curve, the southern states Texas, LA, GA, MS AL FL (yes FL!) will have a surge starting in June, lasting through early August.

Here in Michigan, the numbers for positive tests are rising, I will agree. The thing is that the number of deaths are dropping like a rock. One day this last week there were 2,600 positive cases reported but only 2 deaths. The positive cases are triple those of a few weeks ago but a third of those a couple months ago. Let’s talk perspective, please. Hospitalizations are only up fractionally and capacity is only at 75% statewide. Let’s remember too that there are over 10 million residents of Michigan.

Somebody else can recite the definition of a pandemic, but I don’t think Michigan or the Nation meet that definition by a long shot.

It ends when enough sheeple realize they’ve been lied to and choose to stop living in perpetual fear of a virus.

It’s so cute the way the proletariat bought the idea that unconstitutional restrictions based on a disease with a 99.74% survival rate outside of nursing homes are about health.

We still need to flatten the curve. The number of cases and deaths are dropping too fast.

1) The restrictions will not be lifted based on any medical evidence. The key factor is political control and compliance with the regime.

2) The restrictions may be lifted temporarily when the regime believes that they have broken the power of the people to resist, and not before.

Unfortunately, the experts
———————————-
I didn’t buy the bullshit to begin with. And I think there are no real experts, only lying government lackeys.
Has Fauxi told the truth straight out even one time? Have any democrat governors told any truths?
Experts? Not in this country. Only liberal liars.

But epidemiologists say three specific metrics are required to get a clear understanding of the country’s overall response: the number of COVID-19-related hospitalizations, the virus’s so-called reproduction number and the number of vaccinations administered.

What does the number of vaccinations administered have to do with “understanding”? Hospitalizations and deaths (however fraudulent those numbers are) are way down, and were heading down before the mass vaccinations.

Perhaps as early as April? That won’t happen. TSA is keeping its restrictions until at least May 11, and with Fauci saying the boots need to be stomping on our necks until at least 2022, regardless of death and hospitalization numbers, I predict no relief at all this year. My county cares only about what Fauci and the CDC says, the actual local facts on the ground don’t matter.