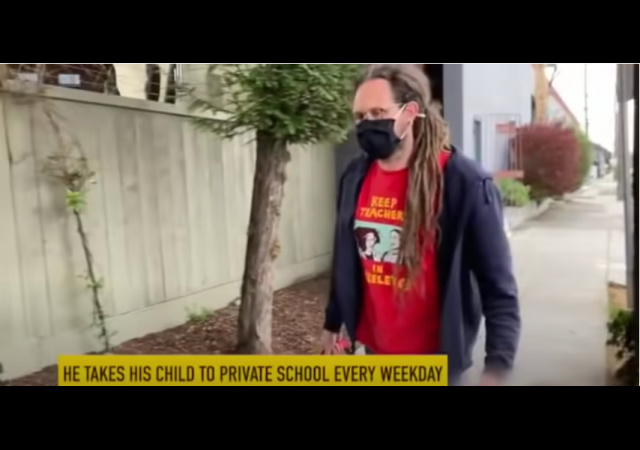 Matt Meyer, the president of Berkeley Federation of Teachers, has insisted for months the public schools have to remain closed until the district achieves the “gold standard.” This includes vaccinating every educator against COVID-19.

But parents in the Berkeley area have slammed Meyer after a video showed him dropping off his 2-year old daughter at preschool.

Meet Matt Meyer. White man with dreads and president of the local teachers' union. He's been saying it is unsafe for *your kid* to be back at school, all the while dropping his kid off at private school:https://t.co/BAIR5xH8LY#OpenSchoolsNow

BREAKING: @BerkeleyUnified union pres. Matt Meyer who has led efforts keeping Berkeley schools closed nearly a year because it’s “unsafe” caught dropping daughter off at private in-person school. Why is it safe for him but not the rest of BUSD families??? Credit @GuerillaMomz
1/3 pic.twitter.com/TRA0Hyx1jS

For what it’s worth, here is Matt Meyer’s Facebook profile picture wearing the same shirt. It reads “Keep Teachers in Berkeley.” Sadly, it says nothing about keeping families in Berkeley.
3/3 pic.twitter.com/eYUzdqCnnM

Meyer claimed there is no public school for his daughter:

Meyer also turned down repeated requests for an interview.

In an exchange of emails he said this was a non-issue. He wrote, in part, “Unfortunately there are no public options for kids her age. There are major differences in running a small preschool and a 10,000 person public school district in terms of size, facilities, public health guidance and services that legally have to be provided.”

Of course, there are differences. But a virus is going to virus. It does not care if you are in a crowded public school or a small preschool.

KQED spoke to Dr. Shelene Stine, who treats COVID-19 patients at a local hospital. Her twins attend the same preschool as Meyers’ daughter while her 5-year-old is in kindergarten in the public school system.

Stine is not thrilled with Meyer. She stressed, like so many experts and the CDC, that schools can reopen:

The divide between the quality in-person teaching her twins receive at the preschool — which includes “play-based learning” — compared to the senses-dulling video-screens her 5-year-old looks at for distance learning is a yawning chasm, she said. She has spoken at rallies to reopen public schools and written public letters to the Berkeley Unified School District to push them to reopen safely.

Berkeley teachers have claimed that kids may not honor masking requirements, which Stine says her personal experience contradicts.

“I am a physician. It is definitively the scientific agreement that it is possible to deliver safe in-person education,” Stine said. “It’s infuriating to know Matt Meyer says kids can’t wear masks when kids in his preschool wear them all day long.”

I’m shocked, shocked, I tell you, to learn that there’s hypocrisy in a teacher’s union …

Hypocrisy on many levels. On in-person schooling yes. And not insignificantly notice that this sludge is not about to subject his child to the miserably low teaching standards of public schools. No, he sends his child to a private school.

Public school officials are not the only ones to send their children to private schools. Teachers do the same thing.

This reminds me of automobile repair people as well. Take a look in the parking lot of that Mercedes, BMW, Volkswagen, or Jaguar dealer. Go in the back and see where the mechanics park. You see a lot of Chevrolets, Fords, and US-make pickups. Those people are not fools.

Meh. Meyer is just bucking for a shot at Secretary of Education, under the new “Rachel Levine” standard.

Amputating your child’s sex organs is a complicated subject, Senator!

They have a different definition of hypocrisy. They use the progressive dictionary definition. In which only conservatives and Republicans can be hypocrites. Much like how only whites can be racists.

The man IS a local Union Representative. It is his job to represent the best interests of teachers, NOT students. He is literally paid to go around discouraging public schools from opening. So…this is quite on par with what the Governor of California, or various Mayors get up to in their spare time.

MynameisallthatIhave in reply to Antifundamentalist. | March 1, 2021 at 6:32 pm

It is VERY evident that he/she/it doesn’t give a damn about the students, except for his
HYPOCRITE!

As another (former) school board suggested…. maybe he wants someone to babysit so he can smoke dope.

As another (former) school board suggested…. maybe he wants someone to babysit so he can smoke dope.

that was my observation

How did all those ‘educators” at the preschool get to the front of the line and vaccinated?

And the idiot is walking around outside with a mask on.

Anyway, the teachers unions continue to tell us greeters at Walmart are ore important to society than their members.

He’s got a ready answer: Those teachers are not my members, so I don’t care about their lives. If my kid kills them, it will serve them right.

Perhaps it’s not about killing; the risks are low. Perhaps it’s about his members preferring an easier work-at-home job.

The obvious point made is that leftist don’t believe their own hype concerning Covid19.

He wrote, in part, “Unfortunately there are no public options for kids her age.

The better hypocrites, of course, do not make such rookie mistakes.

There are no public options for ANY of the children in his district, precisely because he’s working to keep teachers out of school. As has been pointed out, his job is to represent teachers, not children, but it’s precisely the optics of taking his own child to pre-school that guts his ability to do his job.

I see what look like dreadlocks in that top photo. Does that make him mug-proof in neighboring Oakland?

This guy may not make it past the next CRT session based on the photo which appears to show him wearing ‘culturally appropriated’ dreadlocks. At least in ‘modern form’ from Rastafarian culture…. though on second thought and another look at the photo, I am unwilling to discard that as a possibility for him.

Sometimes the simple answer is the only answer. Maybe he’s just a slob.

This guy straight-up lied when he said that he had not even considered whether the government should force girls to compete in sports with men.

He also claimed that antifa couldn’t be a domestic terrorist organization because they only set fire to federal buildings at night.

Graham, Grassley, Tillis and Cornyn — all Usual Suspects — defected to the Democrats, as usual.

Kids bringing guns to school are less dangerous to the teachers than covid.

WIth covid, the teacher will DIE!

What on earth is that mess on his head? That sissy looking creep needs a weave or some hair-club-for-fems do-rags.

On the uptick, it is surprising that he/she/they actually brought a fetus to term and let it live.

Parent your own damn kids.

I dunno, I liked going to nursery / kindergarten. I remember I built model ships out of wooden blocks. I had trouble with the hull curvature but I made some rough attempts at it, some of which fell down. That’s my memory of “play-based learning”, and it was more fun because there were other kids around.

Lifestyles of the Rich and Socialist:
https://www.foxnews.com/politics/lifestyles-of-the-rich-and-socialist-from-chavez-to-castro-leaders-who-lived-the-high-life

Proves, again, how much these teachers hate their jobs and would rather get paid staying at home.

The elites are exempt. Because they know how to behave properly. And have little or no contact with the little people. They police their own as they see fit.

There’s more schmutz in his hair than in any school classroom. ?

It’s california. We need to all go to the border with shovels and pick axes and cut them off to float into the Pacific Ocean.

Hey – he just believes in the Hypocritical Oath: “First, do no harm to ME.

This person is a teacher? Somebody actually hired this and thought it a good idea to allow this to teach children of any age?
What were they thinking? And why is this walking danger to education still employed as a “teacher”?

Do we not have any standards left in the West?

To put it in words a leftist might understand: how can we allow someone to teach children who so blatantly culturally appropriates filthy dreadlocks and whatever else strikes its colonialist fancy?!

He’s a teacher’s union official, not (necessarily) a teacher.