“The power to regulate foreign and interstate commerce belongs to Congress – not the President. This is another example of Joe Biden overstepping his constitutional role …” 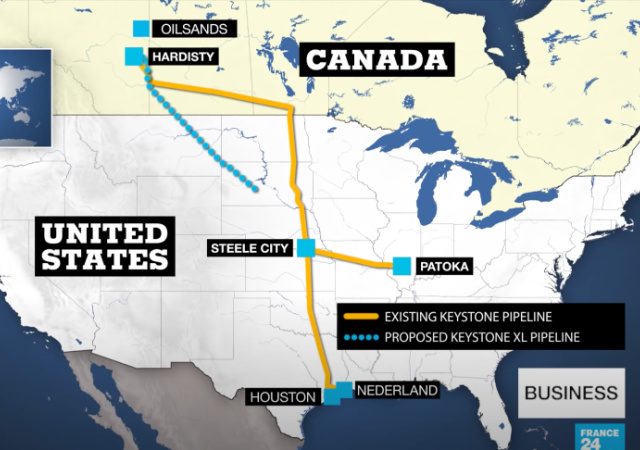 I was wondering when someone would sue over Biden’s executive order halting construction of the Keystone Pipeline. That move has destroyed thousands of high-paying blue collar jobs, and together with other anti-energy moves, seriously damaged the nation’s energy independence.

If the roles were reversed, Democrat activist groups would have been in court the next day all across the country hoping some judge somewhere would agree with them and issue an injunction. That’s what happened in the travel cases, so many cases were filed in so many different district courts that opponents only needed to win once. It didn’t matter if Trump won most of them, even a single nationwide injunction stalled things for weeks or months until it got to the Supreme Court, where eventually Trump won.

Republicans have nothing approaching the legal infrastructure to resist Biden that Democrats had to resist Trump. Instead, Republicans have to rely on state Attorney Generals, who have limited standing to sue. So it was a good sign when Republican Attorneys General sent a letter to the Biden administration threatening suit.

And it’s even better that they filed suit today. From a press release by Montana Attorney General Austin Knudsen:

Despite several exhaustive studies undertaken by the Obama State Department that concluded the Keystone XL pipeline would boost the U.S economy, create American jobs, and safely transport oil throughout the country without increasing greenhouse gas emissions, Biden revoked the permit via executive order mere hours after reciting his oath of office. However, he did not have the power to do so.

“The power to regulate foreign and interstate commerce belongs to Congress – not the President. This is another example of Joe Biden overstepping his constitutional role to the detriment of Montanans,” Attorney General Knudsen said. “There is not even a perceived environmental benefit to his actions – his attempt to cancel the Keystone XL Pipeline is an empty virtue signal to his wealthy coastal elite donors. It shows Biden’s contempt for rural communities in Montana and other states along the pipeline’s path that would benefit from and support the project.”

The lawsuit states, “The decision to provide or withhold permission to construct and operate an oil pipeline across the international border with Canada is a regulation of international and interstate commerce. Under the Constitution, this power resides with Congress.” Therefore, “President Biden’s decision to revoke the Keystone XL permit exceeded the scope of his authority under Article II of the Constitution.”

The attempt to block the construction and operation of the pipeline is also “contrary to law and an affront to the Constitution’s separation of powers,” as Congress expressly permitted the project in the 2011 Temporary Payroll Tax Cut Continuation Act.

The Act required Obama to grant the application to construct and operate the cross-border facilities or report within 60 days to Congress why he thought the pipeline disserved the national interest. If he failed to grant the permit or make a negative national interest determination within that time, it provided that the KXLP permit “shall be in effect by operation of law.” , but then denied the permit because, he complained, Congress had not given him enough time to consider the matter.  He did not report to Congress why he thought the KXLP disserved the national interest—which means the pipeline was authorized by default rule.

Further, Biden’s permit revocation and the administration’s attempts to carry it out also do not comport with the Administrative Procedure Act, violate the non-delegation doctrine, and are arbitrary and capricious.

The lawsuit asks the court to declare the section of Executive Order 13990 cancelling KXPL’s cross-border permit unconstitutional and unlawful and seeks to prevent the Biden administration from taking any action to enforce the permit revocation.

You can read the Complaint here.

Leftists always seem to find the judge they need for these type of cases. It was a private enterprise and only helped the global warming activists.

Finally. Just hoping they can get an injunction stopping the executive order, like was done in the DACA case.

OK, if the parties were reversed we know that a Democrat Justice of the Peace who has jurisdiction on Johnston Atoll [look it up] would issue an injunction that would be considered valid all over the world and in a radius of 1000 miles around each of the Mars landers.

Now we have Republican Attorneys-General of almost half the states filing suit against the Executive Orders. And we know from precedent that every court from the Supreme Court on down will ignore it for as long as they can, and then if forced will find a dubious procedural grounds to ignore it forever. We have no legal system, other than to oppress Americans.

They are hot on equity, so look for their vulnerabilities, use them to make them sorry. and if you cannot find real dirt, then follow their Russia-gate example, and frame them.

As long as they can get away with nasty conduct it will not change. They need to feel pain, lots of pain.

Dr. Jacobson – I think we are sorely outnumbered and overpowered by our lack of the kind of structure the Dems have in fighting for or against legislation they favor or oppose. We are decades behind them. And this is how they win things they want and fight things they don’t.

How do we develop this type of infrastructure? It seems that it needs to be done separately by state.

Read this carefully and take your time to think it through.

If I am reading it correctly, this may be the first sign that the GOP is opening up to the idea that they are powerless to stop Trump in taking over the party. That letter, which Trump also signed, may be the first “final” offer to corporate America to make up their minds about whose side they are on. A Trump bloodbath is coming against both wings of the Uniparty in 2022 unless these ESG woke companies change sides.

It leaves out, among other things, the role of the banks and the Fed but let’s see where it goes. Interesting that Hugh Hewitt seems to be the spokesman for this initiative.

1) There is an assumption being made that there will be actual and valid elections with an honest count of real votes only in 2022. That assumption is increasingly dubious to the point of being moot.

2) How many times has the GOP flat out and deliberately lied to us by claiming to be on the side of conservatives and the Constitution while stabbing both in the back? It will take more than that to be convincing.

Your points are important but for American industries to abandon the Dems and their “wokeness”, the party that is actively putting them out of business, and stop splitting their money between the two parties would be monumental. Who would they turn to if the GOP blew them off, told them to choke on their money and pivoted to focusing on Main Street as their new party mission?

Both the GOP and the most important of American industries are headed for elimination. Meanwhile, the GOP has been working harder to eliminate their only leader (Trump) than the Dems. This letter strongly suggests that the groundwork is being laid for the GOPe elite for the surrender to Trump as the party leader. Seems to me that Trump might be driving this move by the GOP.

Trump is a smart, ruthless negotiator and he holds all of the trump cards (pun unavoidable). The real question is whether this would happen before Trump guts the GOPe in 2022 while sweeping out the Dems. Were that to happen, whatever leaders survive will have no hope for being part of the new GOP. For now, they have an opportunity to be part of the solution. Make the wrong choice and the revolving door career options disappear. Even the most corrupt who want to survive wouldn’t understand that.

So is that what is going on? I don’t know but it is worth exploring and watching what happens. So far, only Breitbart is picking up on this. I think it is a very big deal.

Republicans have nothing approaching the legal infrastructure to resist Biden that Democrats had to resist Trump.

That right there is a major problem. If the GOP weren’t so well ensconced as the ‘stupid party’, it would do something about that disparity.

Reality check – The refineries in the South West are configured to run with crude that is medium heavy. Because fracked crude is super sweet and super light and has very little sulfur and mercury, the older refineries import heavy sour crude to get a blend they need. With this pipeline, they could import that crude from Canada. Without it, they import the crude from Venezuela.

I doubt that very point is lost on the fellow travelers in the Harris/Biden/Rice/Obama/Soros Admin. The pipeline was a win-win for US and Western Canada…both considered enemies by the Left.

“The power to regulate. . . belongs to Congress.”
Well, that’s reassuring.

Build the pipeline. By any means necessary. Use the New Rules.

Biden has signed well over 50 EO’s so far and most of them return America to 100% dependence on foreign oil along with reversing the booming Trump economy. Destroying the Keystone Pipeline economy is merely the tip of the doucheberg for the illegitimate regime.

So how do you think the court(s) will deal with this. Will they simply declare that the state Attorneys General have no standing and therefore the lawsuit is moot? Will they invoke laches and declare that the state Attorneys General waited too long to file a lawsuit and dismiss the the case? Or will they do something new to dispose of this bothersome lawsuit. I am eagerly awaiting to see how the court dismisses this case. Because you know they will.

Don’t bother to sue. They should have just announced their legal stance of the EO’s unconstitutionality as the reason that they are going to ignore the EO and proceed with construction. They already have the permits – their case is already proved. Force Biden prove his case instead, and meanwhile the construction continues.

I’m sick of all these magisterial orders by Biden’s puppet-masters, looking to rule the Republic as if it were a Monarchy.

That will not work: the Biden administration would simply go to Federal court and get a ‘stop-work’ order, which the construction companies would have to obey.

There use to be elections, but government and its supporters have rendered elections moot.