UPDATE: Hasbro said it will label the toy as Potato Head, but Mr. & Mrs. Potato Head are not going anywhere. I guess they’re trying to please everyone? 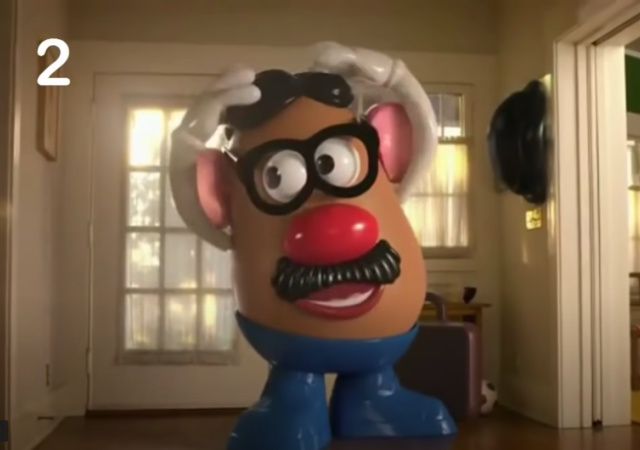 Hasbro, the company that makes the potato-shaped plastic toy, is giving the spud a gender neutral new name: Potato Head. The change will appear on boxes this year.

Toy makers have been updating their classic brands to appeal to kids today. Barbie has shed its blonde image and now comes in multiple skin tones and body shapes. Thomas the Tank Engine added more girl characters. And American Girl is now selling a boy doll.

Hasbro said Mr. Potato Head, which has been around for about 70 years, needed a modern makeover.

But then Hasbro tried to save face!

Mrs Potatohead is now probably Mzzzz PotatoVadge, complete with a pussy hat in the kit.

This is just an underhanded way of hiding the fact that Mrs. PH’s divorce papers recently became final. She had had enough of him spending his paycheck very Friday on trampy croquettes, and then coming home mashed.

If he wasn’t mashed, he’d be fried on some drug or another. Of course, he kept his eyes peeled on the lookout for the cops. They tend to get boiled about people who are on drugs.

Do you have a hashtag for all that?

Hasbro should change its name to Hasbeen.

Is Ken going trans next??

Ken never had any hardware, neither did Barbie.

“Their marriage was a failia cause they had no genitalia.”

I would hope Barbie didn’t have any “hardware.”

I understand Breyer is getting ready to introduce a jackass.

(This isn’t even much of a joke, given that they’ve already started offering unicorns. Really.)

I suppose that people could correct this by adding Mr. with a permanent marker, but a better idea is to not buy their shit.

They ruined D&D and now this crap.

I’ll make my displeasure known at the shareholders’ meeting.

Nah, that one was driven by the small-but-vocal crowd of lunatics that don’t actually play D&D but claim to be gamers. The D&D market is high school and college kids, and that market won’t punish them for going all-in on the virtue signalling.

It’s why gatekeeping needs to come back. The vocal, lunatic minority ruin everything they touch (EG: Orcs are racist stand in for black people![They aren’t]; What about transgender/disabled individuals? [For real? You’re playing a game where MAGIC IS PREVALENT and you can change anything you want about yourself and you’re asking for representation?])

You don’t say? Does that mean the D&D group I am in (no one under 40) does not exist? Or the extremely large contingent of Adults who game in their, admittedly more limited than the baby gamers, free time, do not exist? You are playing the there are no female gamers trope except you are applying it to adults.

Sad; I guess I will have to hang on to the memories of of 2nd edition rules….

Aw don’t say that. Imagination is even more necessary as an adult. It helps you keep your mind open to possibilities.

“Barbie has shed its blonde image and now comes in multiple skin tones and body shapes”. She is now a 265 lb slatternly disabled woman with multiple baby daddies. The Barbie house is now a rat-infested section 8 tenement. Ken is getting jailhouse ink but his grandmother, who tried to raise him, claims discrimination by the Poleese cause he ain’t did nuttin.

Think of all the shelf space they could commandeer in a toy store if they produced a different box for each of the 57 genders.

One for each state.

Gender neutral? No masculine or feminine attributes (e.g. sexual orientation)? Does he/she/it get to keep his eyes?

Sex and gender were conflated, confused, and mutated to include trans/homosexuals who wanted to socially distance themselves from others in the transgender (i.e. state or process of divergence from normal) spectrum. The genderphobia is palpable and a progressive condition. #BabyLivesMatter(BLM)

Is Potato Head still viable? Woke and drowsy. Perhaps a wake is in order.

Abort the spud, cannibalize his… her… its profitable parts, and sequester his carbon pollutants.

NN, just curious, how would you feel about a retroactive abortion of Obama, Harris, any of the squad?

Since when is Barbie an “it”?

How ’bout some trivia?

I believe it was a Doonesbury comic that lampooned Bill Gates about dating (before Melinda) and either nick-named him – or doxxed his Microsoft employees nickname for him – which was “Potato Butt”.

How about Senior Potato Head since Spanish will be our national language in a few more years.

2) As potatoes have zero trans fat in them, can we get a “No Trans Potato Head?”

The two Hassenfeld Brothers are probably turning in their graves. Hasbro came to be in the very working class town of Pawtucket, Rhode Island (pronounced P’tuckit).

A lot of the older Rhode Islanders have conservative leanings due to their Italian and Irish roots, but time, more recent immigrants, and the generations of brainwashed-by-teacher-unions kids have given the Loony Lefties the majority.

Sad to see another Rhode Island product fall victim to the insanity that is seen by people in other countries (okay, at least one newsperson in Australia that we know of) but accepted and embraced by many in the US. ?

I know a great many RI Italians, and can count the conservative ones on the thumbs of both hands. Sorry.

And thank you for being so right about P’tuckit. With all the things Family Guy gets right about RI, I don’t understand how they continually mispronounce that. That, and it’s KAW-hawg, not CO-hawg.

I’ve often wondered about the fate of the exec at M&M/Mars who declined to have their product used in the movie E.T. which resulted in Skittles being famously used instead.
.

Trivia: We were taught as kids that Native Americans (back then called “Indians”) used shells as money, called “wampum.” This is not entirely correct. Specifically, the natives of east coast of North America used as money a particular part of the shell of the quahog (a large, hard-shell clam) that was cut out in a disk shape, pierced, and then strung on string.

A clam has two large muscles attached to the interior of each “valve” (the technical term for the two shells of all “bivalve” mollusks) that operate to close the clam’s shell. The attachment points of these muscles form “muscle scars” on the interior of both valves, so there are two such scars on each valve. Unique to the quahog, the scars are a deep purple color. (Any New Englander who has seen a quahog shell knows exactly what I’m talking about.) It was this part that was cut out of the shell and used as wampum. This is why the scientific name of the quahog is Mercenaria mercenaria, “money money.”

I attended elementary and junior high schools a block away from Hasbro. (My father worked at Royal Electric, later ITT Royal Electric, set back from the main road and behind Hasbro.) Us kids used to go up to the windows and look in, where we could see GI Joes and other toys being produced by the machines on the shop floor.

So sad. Some of the best characterizations in the Disney “Toy Story 1,3,3,4” are the many infamous lines with double innuendos spouted by Mr. and Mrs. Potato Head!!! The Woke have no sense of humor !

Their decision not to carry out the change is not based on politics or publicity.

Probably a smarter employee, like a janitor, asked: “If there is only pototohead and not Mr. and Mrs. Potatohead. Why buy two?”

Apparently, Haszes (formerly Hasbro) has backed down from the gender neutral “Potatohead” after it was pointed out that this would half their sales.

Correction:
What this means is that you can put the Mrs Potato Head parts on a male potato that identifies as a female potato, and vice versa, and mixed parts on a potato that uses any pronouns other than “he” or “she.”

Effed up my own joke!

Tater Head…comes with rolling papers and an alligator clip hand?

How long before they ruin everything?