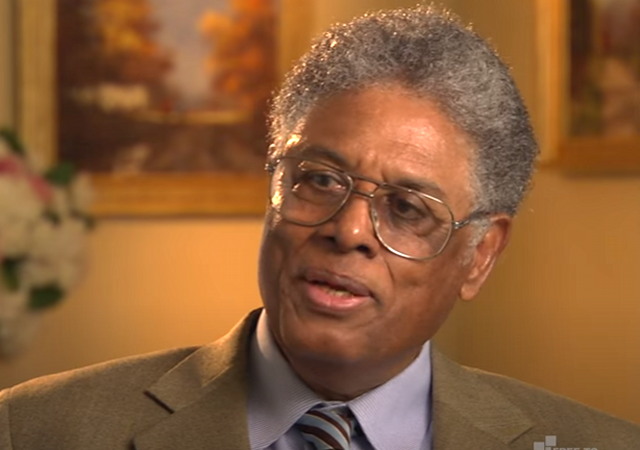 Longtime Legal Insurrection readers will be very familiar with the work of Thomas Sowell. A new documentary about him called ‘Common Sense in a Senseless World’ came out on YouTube.

Jennifer Kabbany of The College Fix provides a detailed description:

Thomas Sowell is often called “the smartest person in the room” by those who know him. A newly released documentary explores how he earned that honor, and why he is considered by many as one of the greatest intellectuals of modern American conservatism.

“Thomas Sowell: Common Sense in a Senseless World” debuted last week. The one-hour film by Free to Choose Media is available to view for free on YouTube and Vimeo, as well as on Amazon Prime.

It traces Sowell’s life, starting from his humble beginnings in North Carolina and his coming of age in Harlem. It then follows his footsteps as he made his way as a student and then educator at such campuses as the University of Chicago, Harvard, Columbia, Cornell and UCLA.

Stacey Lenox of PJ Media reminds us that Sowell began his intellectual journey as a Marxist:

Sowell was once a committed Marxist, even after taking classes from Milton Friedman at the Chicago School of Economics at Chicago University. There, Sowell says he learned that you could advance an argument but that you had to bring the evidence to support it. Larry Elder says this is where Sowell began to use data rigorously, which remains a hallmark of much of his writing. He remained a Marxist throughout his time in graduate school. Only a stint working in the government changed his mind.

Set aside an hour and watch this program. Sowell is a national treasure who rarely gets the recognition he deserves:

Dr Sowell is a National treasure. He should have his own Holiday. A giant of a man.

Absolutely. And a statue in DC.

Suppose that he was not black. Would there have been a documentary?

The answer is, “yes.” Dr. Sowell is a conservative icon, a hugely influential economist and a respected sociopolitical philosopher. He is the heir to Milton Friedman’s legacy. His story is an interesting and inspiring one, inasmuch as, like Ronald Reagan, he also was seduced by Leftist politics, until finding himself on a path to conservatism.

The fact that Sowell is a black conservative also does matter, because black conservatives are something of a rarity, but, my point is, this guy is an iconic contemporary economist and thinker. So, your implication that Sowell’s skin pigmentation is the sole reason for him being the subject of a documentary is insulting and really misunderstands what a giant of a man this guy really is.

Common nouns, notwithstanding, at least you capitalized Leftist.

No one was impugned. Jesus, I wonder if Friedman was a Baptist.

Thomas Sowell’s books continue to be best sellers, in many cases years after they were published. I checked a couple of days ago on Amazon, and he had 12 books in the top 10,000. His Basic Economics textbook was ranked 687 among all 50 million books for sale on Amazon, and was the top selling book in the category “Economics”.

I love Dr. Sowell. David Mamet called him “one of our greatest contemporary philosophers;” spot-on.

I wish POTUS Trump had bestowed the Presidential Medal of Freedom upon him, during his term. It’s richly deserved.

Conservatives are so often “blended” in with the notion of the GOP or Republicans. We’re not that way though given the absence of a better choice, we’re certainly not socialist democrats.

I don’t have a lot of experience with Libertarians beyond their not being commies or lefties but find their better qualities to be a lot closer to conservatism than George W. Bush found comfortable.

Thank goodness, Sowell never pulled a George Will, out of nowhere.

One of my heroes for many years.

Sowell forgot more than liberals will ever know.

This man should be president. Why he has not been called to serve in Washington is beyond me and it shows the dearth of judgment in our government to my mind. If nothing else, his example of intellectual honesty and integrity alone is sadly needed in our government today, but his ability to break complex issues down to specific understandable processes is beyond my ability to praise. He is a shining star in a time of darkness.

“He remained a Marxist throughout his time in graduate school. Only a stint working in the government changed his mind.”

That should do it for just about any thinking person. Best argument for about 3 years of compulsory govt work for every young American – Conscription with the option to choose the military.