Meanwhile, US Space Force is staying, the Artemis lunar mission is a go, and Perseverance landing next week will be historic. 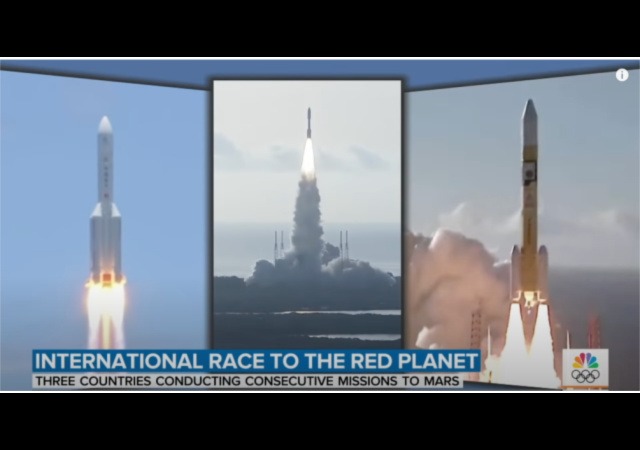 The probe is the first since NASA’s Insight lander in November 2018 to reach the planet. The successful arrival at Mars makes the UAE the fifth nation to reach Mars, following the United States, Russia, China and India.

“After all of these years, it’s been achieved, today, by the UAE, and it is just an incredible moment. It’s such an honor to have such a moment,” Fahad Al Mheiri, an executive director with the UAE Space Agency, said during a live broadcast.

Hope (or Al Amal in Arabic) will study the Martian atmosphere for at least two years.

It was successfully followed a day later by a Chinese mission.

Tianwen-1, or “Questions to Heaven”, comprises an orbiter and a rover.

Engineers will bide their time before despatching the wheeled robot to the surface but the expectation is that this will happen in May or June.

It follows December’s impressive mission to retrieve rock and soil samples from Earth’s Moon – by any measure a very complex undertaking.

With space being the new “high ground” in terms of defense strategy, it is an excellent time to see what plans the new administration has regarding the top-rated space program. Fortunately, the news is not as bad as one might fear.

The US Space Force, popular with President Donald Trump’s supporters, is officially here to stay.

White House spokeswoman Jen Psaki told reporters during a Feb. 3 briefing that the new service has the “full support” of the Biden administration.

“We’re not revisiting the decision,” she said.

The Artemis Mission to the Moon is still on track.

“I’m very excited about it now – to tell my daughter all about it,” Ms Psaki said, adding: “Through the Artemis programme, the United States government will work with industry and international partners to send astronauts to the surface of the Moon – another man and a woman to the Moon.”

She explained that the missions would carry out “new and exciting science, prepare for future missions to Mars and demonstrate America’s values.”

The National Aeronautics and Space Administration has selected SpaceX to deliver the first two segments of the moon-orbiting Gateway space station for the Artemis program.

The flight, which is the second to be awarded to SpaceX this week (the first was a contract worth $98.8 million to launch NASA’s SPHEREx astrophysics mission) will carry the Gateway’s power and habitation modules. Launching from Pad 39A at NASA’s Kennedy Space Center in Florida, the mission will cost NASA $331.8 million and is scheduled to blast off no earlier than May 2024.

Once deposited in lunar orbit, the Gateway will serve as an outpost for astronauts and equipment heading to the moon as part of NASA’s Artemis program. Roughly one-sixth the size of the International Space Station, the Gateway will support research investigations, crew, and expeditions to the lunar surface.

Finally, NASA is just over a week away from landing another Mars lander. The technology is so advanced that, for the first time, we’ll be able to see and hear what it’s like to touch down on another world.

Perseverance is due to land in Jezero Crater on Thursday, Feb. 18, becoming the first artificial object to land on the surface since the Mars Insight lander in 2018 and the first rover since Curiosity touched down in 2012.

But the new rover on the block is carrying more audio-visual gear than its predecessors to capture portions of the pivotal entry, descent and landing, or EDL, phase of the mission. A camera mounted on the back shell of the spacecraft is pointed up and will be able to catch a view of the parachutes that will deploy during descent to slow Perseverance as it comes in for its landing. Beneath this is a downward-pointing camera on the descent stage, which further slows and orients the rover for landing.

Perseverance may be the most aptly named mission in quite some time. Here is a sneak preview from the Jet Propulsion Lab:

The UAE? Muslims plotting out where to put the first Martian mosque?

Many are unaware that there is a Malaysian Space Agency, a part of the Dept of Islamic Development Malaysia. (Aside: “Islamic Development” exists in the same universe as “dry water”). This “space agency” wrestled with the greatest problem facing a then-upcoming space flight on which a Malay Muslim would be given a free ride at America’s expense using America/Western know-how & technology.

The problem, How to face Mecca from outer space?

Whew! A load off everyone’s mind. Leave it to the Muslim to come up with the really, really penetrating questions facing us all.

Likely the same way someone is ‘buried’ at sea – wrapped in a shroud and tossed off the ship before their putrefaction leads to pestilence among the cramped confines of the craft.

Except decay, purification, only occurs in the presence of oxygen. No oxygen, no decay. Meaning the body “buried” in space lasts forever.

This is a major concern with any manned flight, the possibility of death in space, for example, when doing a repair to the ISS and the body can’t be retrieved yet is still “there” next to the ISS.

Orbits do not last forever. The odds are the corpse will fall into the atmosphere and burn up.

Columbia crew parts were found in Texas. Depends on size and mass along with the velocity of reentry.

Tom Stanford is a retired American astronaut. I one heard him recount a story about Gemini IX which he flew with Gene Cernan. Cernan was scheduled to do a spacewalk during the mission (it was the second spacewalk by an American astronaut). Stanford – who was the mission commander – was summoned by NASA management to a private meeting without Cernan present. Stafford was told by NASA that if Cernan died during the spacewalk – which was a very real possibility – then Stafford had to bring the body back.

Stafford refused. He pointed out that it would be impossible to get Cernan and his spacesuit back into the Gemini spacecraft by himself and close the hatch (Gemini spacecraft were so cramped that several astronauts who did spacewalks had enormous difficulty closing the hatch after it was over. The problem was that the spacesuits were like inflated balloons that expanded in the vacuum of space). And re-entering the atmosphere with the hatch open and Cernan’s body outside would be suicide. Instead, Stafford said he would have to cut Cernan’s body loose.

Fortunately, Cernan did not perish in the spacewalk, and later went on to command Apollo 17, the last manned trip to the Moon.

How and when depends on the person. If they loudly wail like they have a bad bellyache, you place then in the airlock, have a n ice pork dinner, followed by putting all the byproducts in to the airlock, and then space them.

Must be the time of year/orbit when Hohmann orbits match up for least-thrust packages sent to Mars. Yea! More YouTube videos. (I’m such a space geek)

I’m wondering how long there has been an orbiting battle taking place?
SDI was what, 35 years ago?

“The Artemis Mission to the Moon is still on track.”

Yes, but for how long? As an engineer I agree with critics of the Artemis Project like Robert Zubrin and Buzz Aldrin, who believe that NASA may have difficulty meeting their stated goals. I believe NASA is also radically underestimating the technological difficulties in establishing a lunar outpost (a goal of Artemis), just like they did with the Ares booster (talk about an expensive flop!).

While NASA fidgets with the moon… Musk will have Mars.

I’ve been waiting for the Dems to announce that NASA is returning to its former mission of Muslim outreach – that’s probably where the UAE got their start.

The Communist Chinese may be in orbit, but they landed in the White House. They must be incredulous over their success. Same as Soros was when he got that traitor Barry in.

We have a traitor in the White House – again. And this time, there’s not even an attempt to hide it.

Biden is doing to the US space program what Barry did to it: destroy it. And likely at the behest of his Communist masters.

Communist China runs our government by proxy. Wait till the camps open here.