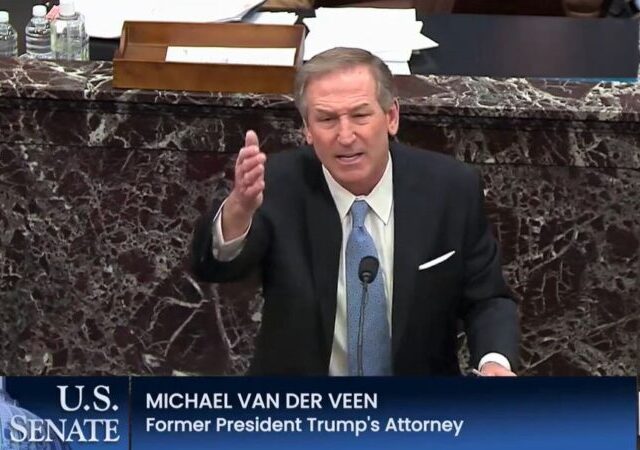 Due to his defense of President Trump during the second Democrat-led sham impeachment, attorney Michael van der Veen has had his family terrorized, his life threatened, his home vandalized, and his business descended upon by people chanting a nonsensical little ditty.

Michael van der Veen, one of the lawyers who defended former President Donald Trump successfully in the Senate impeachment trial, said after the verdict Saturday that his family, home and law practice are “under siege” due to his representation of Mr. Trump.

“My home was attacked. I’d rather not go into it because it would encourage other people to do it more, but you know, I’ve had nearly 100 death threats,” he told reporters. “My home was attacked last night — windows broken, spray paint, really bad words spray-painted everywhere.”

Among the vandalism, someone spray-painted the word “traitor” on the driveway of his Philadelphia home.

In addition to that horror show, a small gaggle of “Refuse Fascism” protesters gathered outside his Philadelphia office to urge . . . someone there (?) to convict Trump.

A group of demonstrators with the group Refuse Fascism gathered outside his Center City law office chanting, “When van der Veen lies, what do you do? Convict. Convict.”

Here’s a clip of part of the protest. They aren’t chanting in this (and between the megaphone for the audience of two and the drumming, it’s a bit cringey).

PELOSI MUST RESIGN NOW and be prosecuted for incitement.

Nobody will even attempt to lay a glove on her. And she knows it.

I’m so old, I remember when the US had a government agency called the Federal Bureau of Investigation who would immediately take charge of finding and arresting the people who did this.

The FBI is not a friend of the people. They are corrupted and on the side of the enemy.

Today’s FBI gathers up all the evidence of government corruption and makes sure that it’s never seen again.

Thanks, I needed a good laugh about now.

That is I agree with the sentiment, but we both know that will never happen. It will be something short of a miracle if she retires instead of her dead a** being carried out of the House Chamber.

Or just throw a glass of water on the Wicked Witch of the West and she will shrivel up and disappear.

We should form our own “Citzens’Court” and impeach her. Better yet, indict her.

We’d have the same power to do it as Congress has to do what they’re doing now.

“Creating an environment” is not incitement. Pelosi cannot be prosecuted for incitement, any more than Trump can.

Welcome to the United States of Belarus.

Sooner or later, a gang will attack a home and one or more residents will step outside and cut two or three in half, using a shotgun loaded with slugs.

I look forward to it.

I am certain some Dem DA will make that castle doctrine into “me casa, su casa”.

Then, the DA needs the same treatment.

Look how one is persecuting the McCloskeys, and they didn’t even shoot anybody.

Democrat socialist goons tried to do the same thing to the (former) Seattle police chief’s home. Her neighbors met them with rifles, shotguns, and pistols and told the brownshirts to get lost. Local sheriff deputies showed up and reiterated the message.

Democrats only respect the threat of violence.

Does anyone think that threats will be enough to turn this around?

Hi, for one, do not. See my remark above about shotguns and demonstrators. Uhh, make that rioters.

I commented on a really neat tactical 12 gauge shotgun, it has two magazines, each holding 7 shells. There is also a 2.2″ Minibuck shell which raised the total capacity to 17 shots. You can switch between them, so one with 00 buckshot, and one with slugs would be a very effective self defense weapon. KelTec KSG, about $1000

Turn it around, as in a strategic win? Not a chance. A temporary, tactical win limited solely to that time and place, yeah.

No, but casualties will.

It’s amusing that those “refusing” fascism are actually advancing it. Not that these blockheads could detect irony.

This can be said about virtually all the vitriolic effluent that the Democrats and Leftists spew forth.

80% of these people couldn’t define fascism for $500 on Kids Jeopardy, and another 18% would define it as “Hitler.” It’s just a word they use that means “everybody we don’t like.”

She didn’t know what to do and as a result let him have his say.

Will she be cancled now for not cutting him off?

That was amazing, and she deserved every word, if for no other reason than she decided to argue with him and talked over him to do so. She was fighting unarmed, though. His dismissive tossing of his mic was just perfect.

What the hell are any of you people talking about? Did any of you hear her question? Van Der Veen certainly didn’t. She did not minimize the evidence tampering. Not in any way at all. She simply summarized what, as she understood it, he was talking about, and asked him to confirm it; that’s basic journalism. Without it how on earth were viewers supposed to have a clue what was going on? But he went off on her and repeatedly refused to listen to her explain what it was she’d asked him. He was going to have his rant and didn’t give a stuff about facts.

These are sick people. Hope the public turns on them before it’s too late.

This is the new two tier legal system…those with lawyers and those without. Who is pushing this? Lawyers.

We are seeing medicine turned into an extension of the state where health care providers must be vaccinated to keep a job and where questioning bad medicine and state forced bad medical ethics is forbidden.

This is the new two tier legal system…those who are leftists and those who are not. No one is going to investigate this perfect example of hate speech. But let a conservative do it (or even intimate there is conservative hate speech) and the FBI sends a full team of FBI agents to find the evil perpetrators…or to discover the “noose” was a garage door pull cord.

I think you intended to write that the powers that be will come down on a conservative who intimates that there is left wing hate speech.

Spot on with your second paragraph.

There is nothing new about it. This is just a variation on what I have been seeing for many years: “we have the best justice the money can buy”.

This isn’t hypocrisy it is hierarchy.

Their assertion is it is ok to target Republicans they deserve it.

around here, you want to protest peacefully don’t give a damn what you’re saying, will support you–is our right after all

but you threaten a man’s life, his family, attack/vandalize his home, you’re taking your life in your hands

Yeah, but I won’t find them demonstrating in front of any houses out here on the Farm Road. Hassling the Police in a city is one thing, but they aren’t so stupid as to place their lives in real danger.

Its a divided country only waiting for one side to have enough.

I don’t see the left screaming incitement over this.

I am surprised he didn’t have a home security system that didn’t include exterior cameras. Or a private security detail after this very public trial that humiliated the democrats.

I hope he has guns and that he and his family know how to use them.

Atty van der Veen is a registered Democrat, from what I understand. Probably felt safe in his neighborhood and never imagined he’d “need” even passive protection.

The left is setting a bad precedent here. If we go after the lawyers defending the president from a made up crime; what do we do to the lawyers who are tasked with defending a client in a very real severe crime?

Real criminals who have (apparently) committed real horrific crimes are a protected class for the Socialist/Communist Party.

Let’s see if the Democrats, who so decried violence with reference to January 6th, denounce this type of behavior. I won’t hold my breath waiting.

Guess the National Guard and the fences are protecting the wrong persons house.

Well, it was “mostly peaceful” vandalism.

No Democrat denouncing the violence is quoted above.
None of the commenters that have advocated that citizen Trump must be convicted of incitement to insurrection are denouncing this, but I’m sure they will presently do so, no?

Why did the police in Philadelphia not prevent these crimes? Commissioner Danielle Outlaw’s priority number one is crime prevention and reduction after all. Were they oblivious? Do they not know the mentality of the Antifa/BLM brownshirts? They couldn’t at least during the days leading up to and following the impeachment trial increase patrols in the area most likely targeted by those brownshirts?!

Then again, Philadelphia is in the grip of Democrats. So probably is just too much to ask that they actually try and do their job?

It’s not good that Michael van der Veen had his home attacked etc. That shouldn’t have happened. There is no excuse for such behaviour. Every defended has a right to a lawyer that’s fundamental. Further every lawyer acting as a defendants lawyer no matter how they are perceived should be able to carry out there duties free from retaliation (provided they are acting within the law themselves).

Well, it appears that the insurrectionists are back at it again. Were they AntiFA or BLM or a combination of the two? Either way, it would appear that the whiny little snowflakes go berserk every time they don’t gt their way!

I wonder if CNN will follow up to find out if they are quickly scrubbing evidence from social media the way they have on suspected Capitol Hill protesters.