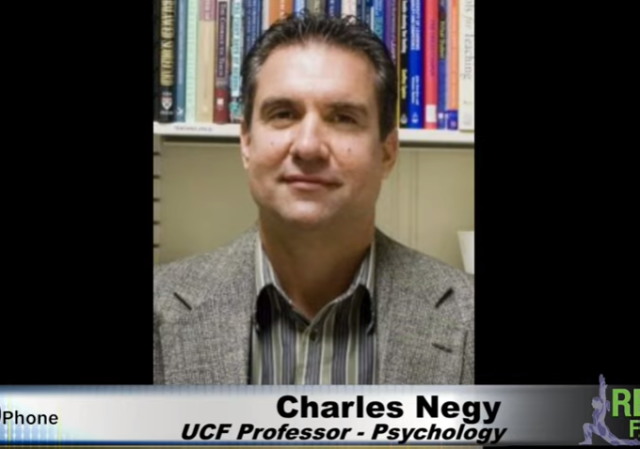 The University of Central Florida has been in the news for its punitive actions against Professor Charles Negy after he tweeted opinions that went contrary to campus and social justice politics. We have covered the Negy case extensively:

An obvious question is what impact on campus free speech would the administrative vindictiveness against Negy have. Apparently, a lot, according to a lawsuit filed by the free speech group Speech First, which has brought cases successfully challenging anti-free speech policies at the U. Michigan and U. Texas.

From the Speech First Press Release announcing the lawsuit:

Speech First, a nonprofit membership association working to combat restrictions on free speech and other civil rights at colleges and universities across the United States, filed a lawsuit today against the University of Central Florida — Speech First v. Cartwright et al — in the United States District Court for the Middle District of Florida Orlando Division as part of its efforts to help restore free speech and expression for American college students and reinforce the need for academic discourse in higher education.

Through the use of three policies – the University’s discriminatory harassment policy, its computer policy, and its Just Knights Response Team (JKRT), the school’s version of a bias response team – the University of Central Florida and its administrators have created a series of rules and regulations that restrain, deter, suppress, and punish speech about the political and social issues of the day.

Speech First members at UCF are unable to express themselves and voice their opinions without fear of investigation or punishment. According to the University, “discriminatory harassment” can occur virtually anywhere, at any time, by any medium. Their corresponding policy applies to incidents on campus and to off-campus incidents that have “continuing adverse effects on or create[] a hostile environment for students…” Once a student’s speech is reported, an investigation is launched and that student is subject to disciplinary action.

Similar rules apply to online speech for students “who use university information technology resources.” The University prohibits using its network to send messages “that reasonably could be perceived as being harassing, invasive, or unwanted.” However, there are no examples or context for what behavior might be included in these descriptions. If the school finds a violation to be particularly serious, the incident is referred to the dean of students of the division vice president and the student is stripped of network and computer access and privileges.”

Speech First members at UCF want to engage in speech that is covered by the University’s harassment policy and computer policies, but they credibly fear that the expression of their deeply held views will be considered “biased” and reported to the JKRT, which serves to “act as a clearinghouse for any bias-related incidents that may occur on UCF campuses.”

The school’s response to these accusations can “involve a variety of activities including discussion, mediation, training, counseling and consensus building”- sometimes summoning not only the person who was impacted by the “bias” but the people who were more broadly involved as well. Failure to participate in these interventions can be considered “disruptive behavior” under the University’s code of conduct.

Negy’s lawyer tweeted out admiration for the lawsuit:

Bravo! These are some of the same policies that @UCF used as pretext to destroy the career of @CharlesNegy for dissenting from the campus orthodoxy. UCF is the baddest of bad actors and I hope Speech First takes them down. https://t.co/LZlJNJiTRC

The Complaint (pdf.) has some interesting allegations on how the Negy case has chilled campus speech:

46. Recent events illustrate how the discriminatory harassment policy can be used to suppress controversial or unpopular opinions on campus. In June 2020, hundreds of students called for tenured psychology professor Dr. Charles Negy to be fired, after he posted controversial opinions about the topic of systemic racism.

47. University officials, including President Cartwright, Provost Johnson, and Chief Diversity Officer Kent Butler, urged students to file discriminatory harassment complaints against Dr. Negy and implied that he should be fired.

48. During a June 4, 2020 protest, President Cartwright agreed with a student that Dr. Negy “should have been fired before he got tenure. That is the problem.” During the same protest, Provost Johnson told students “[t]he single best thing they can do to avoid this type of problem”—i.e., protected speech that students dislike—is “to file a complaint about discriminatory behavior.”

49. Based on those complaints, Dr. Negy was subsequently investigated, found to have committed discriminatory harassment, and terminated on January 25, 2020.

73. The University’s Multicultural Student Center has used its Twitter account to encourage students to use the JKRT to stand up “against prejudice in our community.”

74. An OIE investigation report revealed that the JKRT received eleven reports against a professor, Dr. Negy, after University officials encouraged students to report him. The University later terminated Dr. Negy for “discriminatory harassment” and other alleged misconduct.

98. Student A is aware of the recent investigation and subsequent termination of former University Professor Charles Negy, after he expressed his own opinions on Twitter in June 2020. Seeing a psychology professor investigated and fired for his private speech only heightens Student A’s fear of expressing his views. If a tenured professor can be fired for speech, Student A worries what will happen to him.

115. Student B is aware of the recent investigation and subsequent termination of former University Professor Charles Negy, after he expressed his own opinions on Twitter in June 2020. Seeing a psychology professor investigated and fired for his private speech only heightens Student B’s fear of expressing her views. If a tenured professor can be fired for speech, Student B worries what will happen to her.

129. Student C is aware of the recent investigation and subsequent termination of former University Professor Charles Negy, after he expressed his own opinions on Twitter in June 2020. Seeing a psychology professor investigated and fired for his private speech only heightens Student C’s fear of expressing his views. If a tenured professor can be fired for speech, Student C worries what will happen to him.

“We are still reviewing the complaint. However, the University of Central Florida has a long history of supporting free speech and open expression, and believes so strongly in that right it is guaranteed in the first paragraph of our Student Rules of Conduct,” says Communications Director Mark Shlueb.

The statement quotes the first paragraph of UCF’s Student Rules of Conduct:

“The right of all students to seek knowledge, debate ideas, form opinions, and freely express their ideas is fully recognized by the University of Central Florida. The Rules of Conduct…will not be used to impose discipline for the lawful expression of ideas.”

Shlueb adds students and employees are expected to follow state and federal laws that guarantee freedom from unlawful discrimination.

Don’t think cops had anything to do with it

A policy is a contract, set of rules or guidelines by an organization. It does not really refer to police action though I can see why you think that looking at the word.

It was the MISSPELLING !

I have grabbed my popcorn.

I have donned my sleeping cap until there are significant fines and/or sackings.

Ha ha! Reminds me of the president. Goes through 2 cartons of sleeping caps a week. Wears them 23 out of 24 hours. Would be a great investment if I could find out which company in China makes them.

Which the university have already violated.

This is the kind of issue that Republican state legislatures need to do a lot more about.

Better hurry up and get the money: Nancy Pelosi will become president within a year and martial law will be invoked.

First Cuomo is taken down, then as a precedent, Harris either is exorted – and paid off – to resign (or ruined and forced to resign). Then Pelosi moves into the VP position, and tosses Biden out of office by the either the 25th Amendment, or they extort Biden to resign, lest his son goes to prison.

There’s no other reason a pathetic lox like Harris was chosen to run with biden.

Or, for that matter, Biden.

But do they have standing?

UCF got sued over their egregious attempt to persecute students and professors for thought crimes their thought police comes up with. It is time for this to happen.
Hopefully, there is a way to hold the bad actors personally liable not only in their official capacity. If they just waste money others have to pay they will not be deterred effectively.

Florida’s legislature needs to find a way to hold these people to account. Florida’s AG hopefully can get in and throw the state’s resources behind this effort to protect free speech against these petty tyrants abusing the power entrusted to them.

Should/can Disantis step into this? Somewhere, A republican governor is gonna have to start taking on institutions of “Higher Feelings” head on.

Here’s your sign >> At UCF, the ratio of people paid to simply run the school and administer its “message” in the progressive sense outnumber those who are actually paid to teach paying students almost 5 to 1.