“We believe that person can be the best he or she wants to be if certain things are just removed from their path like onerous taxes, regulations and too much government.” 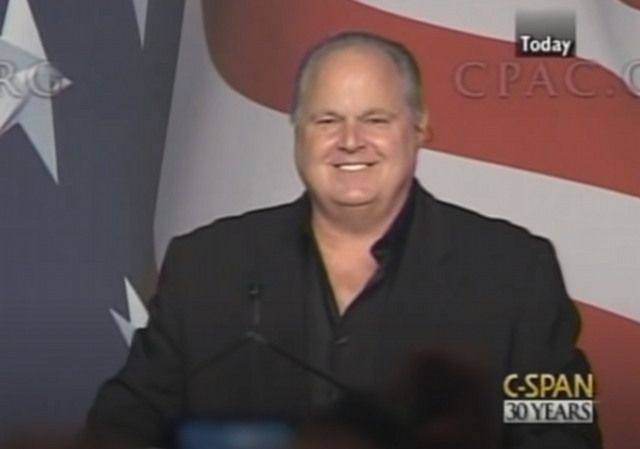 Rush Limbaugh delivered one of his greatest speeches ever at the Conservative Political Action Conference (CPAC) in 2009.

Now that Rush has passed away, it’s an excellent time to revisit this historic address.

Just like now, it was a February after an election and the Democrats had taken everything. Conservatives were feeling very down in the dumps, and this speech from Limbaugh made a lot of people feel better.

Limbaugh spoke for 90 minutes without a script, only pausing for massive applause. He reminded people what it means to be a conservative and that, despite this setback, the battle was far from over.

He said exactly what conservatives needed to hear.

Now, seriously, for those of you watching on C-SPAN as well, and on Fox, I want to tell you who we all are in this room. I want to tell you who conservatives are. We conservatives have not done a good enough job of just laying out basically who we are because we make the mistake of assuming people know. What they know is largely incorrect based on the way we are portrayed in pop culture, in the Drive-By Media, by the Democrat Party.

Let me tell you who we conservatives are: We love people. [Applause] When we look out over the United States of America, when we are anywhere, when we see a group of people, such as this or anywhere, we see Americans. We see human beings. We don’t see groups. We don’t see victims. We don’t see people we want to exploit. What we see — what we see is potential. We do not look out across the country and see the average American, the person that makes this country work. We do not see that person with contempt. We don’t think that person doesn’t have what it takes. We believe that person can be the best he or she wants to be if certain things are just removed from their path like onerous taxes, regulations and too much government. [Applause]

We want every American to be the best he or she chooses to be. We recognize that we are all individuals. We love and revere our founding documents, the Constitution and the Declaration of Independence. [Applause] We believe that the preamble to the Constitution contains an inarguable truth that we are all endowed by our creator with certain inalienable rights, among them life. [Applause] Liberty, Freedom. [Applause] And the pursuit of happiness. [Applause] Those of you watching at home may wonder why this is being applauded. We conservatives think all three are under assault. [Applause] Thank you. Thank you.

If you prefer to read the speech, it’s here. Otherwise, set aside 90 minutes and watch the whole thing below.

Genuine Conservative Principles are just as valid today, next year, or next century. Follow them and prosperity will reign.

Another fact; people will never flourish from Government programs.

“Another fact; people will never flourish from Government programs”

Really how about support for the unemployed , or medical care, or maybe the police or perhaps the justice system as a whole. Blanket statements like that make very little sense.

Soo…who is flourishing under any of those?

NOT true: have of Congress would be working in the post office – or as a barmaid – but for government programs.

Most of Harry Reid’s friends would be still be working stiffs. Nancy Pelosi would be an aging receptionist somewhere.

Obama would still be taking classes at a community college.

Antifa and BLM would not be rich organizations.

Half of America would not be on the dole.

Gonzo…how can I get in touch?