Sohrab Ahmari: “Matt Duss being hired by Team Biden will make the next four years especially painful for pro-Israel folks who pulled for Biden via immense self-deception.” 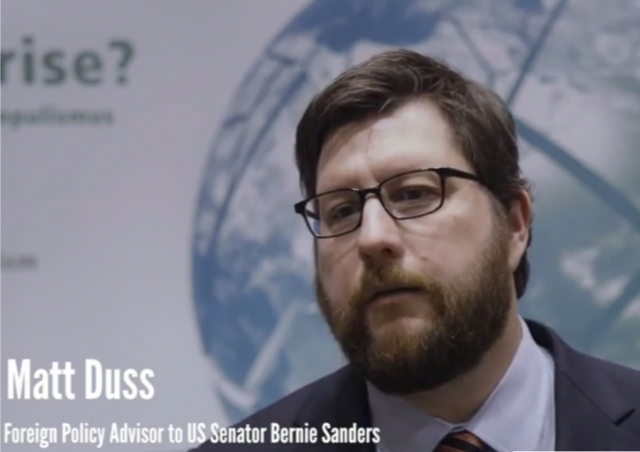 In what could be a big victory for the radical left-wing of the Democratic Party, Bernie Sanders’ chief foreign-policy advisor Matt Duss is tipped take up a position at the State Department, news reports suggest.

“Matt Duss, Sanders’ foreign policy adviser who has become a well-known figure among progressive activists, is expected to depart for a position in the Biden administration’s Department of State,” the Politico reported citing sources. “If that scenario materializes, it will be viewed by many on the left as a victory for progressives,” the news outlet added.

If appointed, Duss may be the most controversial pick of the Biden administration so far.

Matt Duss being hired by Team Biden will make the next four years especially painful for pro-Israel folks who pulled for Biden via immense self-deception.

In a recent tweet, Duss equates Israel to an “apartheid” state. He also supports the antisemitic Israel boycott movement, or the BDS. “Anti-BDS hysteria is a con and Democrats need to stop playing along,” he tweeted in April 2019. But his obsession with the Jewish State goes back a long way.

While smearing the Jewish State, Duss defends the anti-Semitic BDS movement. In a 2015 congressional hearing on this matter, he claimed that “it is a mistake to focus on the BDS movement while ignoring the main reason for its continued growth, which is the failure to end the occupation.” Duss failed to mention that the Arabs citizens of Israel enjoyed equal rights as their Jewish compatriots, while the Palestinian’s in the West Bank and Gaza suffered at the hands of the tyrannical PLO and Hamas leadership.

In 2013, Duss came under fire for blogging Nazi-era propaganda posters. “Duss, a blogger at the CAP Action Fund’s ThinkProgress website, used the Nazi posters to substantiate his accusation that a political cartoon published by a right-leaning Israel group was “blatantly anti-Semitic,” The Washington Free Beacon reported at the time of the controversy.

The WFB in August 2013 profiled Duss’ troubling anti-Israel activism in the blogosphere:

Duss earned notoriety in 2011 when he and several other ThinkProgress bloggers were engulfed in a scandal surrounding their writing on Israel and Jews, with some critics saying the language was borderline anti-Semitic. That prompted a rare rebuke by the Obama administration of the think tank, which has close ties to the White House.

Articles penned by Duss and other CAP Action Fund bloggers were said “to be infected with Jew-hatred and discriminatory policy positions toward Israel,” according to the Simon Wiesenthal Center, which combats anti-Semitism.

Duss wrote that Israel’s naval blockade of the Hamas-controlled Gaza Strip was like “segregation in the American South” and a “moral abomination.” (…)

Officials at Jewish organizations have consistently said Duss’ Israel criticism crosses the line. The use of Nazi imagery, these officials say, is just the latest example.

Matt Duss, Bernie's anti-Semitic foreign policy advisor is about to get a job at the State Department. I can't get bent out of shape about this. He's no different from anyone else that Biden has appointed. What's one more? At least he's consistent. Everyone there hates Israel.

In February 2019, leftist weekly The Nation published a glowing profile of Duss, describing his feats as a noted “Islamophobia” expert and his early fascination with the “Muslim world on a trip to Istanbul” in 2000. “He found the experience of being awakened by the morning call to prayer transformative, and began reading obsessively about Islamic history and politics,” the magazine revealed.

The weekly also explained his prime motivation for entering politics. “The 9/11 attacks the following year left him frustrated and concerned about the way the US media portrayed Muslims and the Middle East, and for the first time in his life he felt a sense of political mission,” The Nation wrote.

The speculations over Duss’ appointment comes as the Biden administration named another Sanders foreign policy advisor, Robert Malley as the new U.S. envoy to Iran. Malley is regarded as the architect of the 2015 Iran nuclear deal and served as the ‘ISIS czar’ in President Barack Obama’s administration.

If you think a second holocaust is a good idea, then nothing.

We’re way beyond that.

After a coup, we now have a Communist China-led Junta installed in our country. Our political party, the GOP is as untrustworthy as treasonous democrats.

It’s all over but the final nails in our coffin. We can’t wait 4 years, or 2 years.

Secession – or a serious threat of it – is our only bargaining chip.

FROM WHOOTP
TO FILE
SUBJ: OFFICIAL PHONE LOG – US SENATOR B SANDERS AND POTUS
DATE: 20210129 1428Z
BEGIN TRANSCRIPT
SANDERS: Mr. President?
POTUS: Oh, err, uh, where’s, where’s my…. my pen. Where’s… I just, I just had it, um…
SANDERS: Mr. President, what are we gonna do about all those JEWZ??? (emphasis in original)
POTUS: Jill, um, have you, um, wait a sec. Maybe… no, not there…
SANDERS: Joe – Joe! There are way too many Jews in Palestine. They control everything there and are a mortal threat to the climate – the CLIMATE JOE! (emphasis in original)
POTUS: Yeah, maybe it’s… No, no, Oh, I know! It’s… now where did I… um…
SANDERS: I’m gonna send someone over to the State Department to take care of this, OK?
POTUS: Um, who is this?
SANDERS: This Bernie – I’m sending someone over to fix this problem!
POTUS: He’s going to find my pen?
SANDERS: I’m sending a guy over!
POTUS: OK, um, where… I just can’t, Jill! Um, where… dang, what was I looking for?
END TRANSCRIPT

Will USA Jews finally wake up? This is not the Dem Party they supported for all these years. This is a mutated version of it. A Frankenstein monster. I thought Jews, given experience, would be very sensitive to when the politics start to shift. It’s sad to see we’ve learned nothing.

No. They won’t. They reflexively vote Democrat like blacks vote skin color. A generally intelligent people who aren’t very smart.

Or who, like many Americans of all political, racial, and religious persuasions, are simply not paying attention. Especially to blame are those people who are older and successful (have money to throw at political causes) who grew up when the American news media was more balanced than now. They missed the change in Democrat policies and politics because they didn’t notice the change in the media, and continue to consume from them as if they are still reliable sources of information.

who grew up when the American news media was more balanced than now.

I have been closely associated with media, there is no doubt that the past decade has seen devastating changes, going from poor to hendrious

Please don’t generalize in such a presumptuous and sweeping manner, as you do. There are plenty of American Jews who are conservative. Including the founder of this website.

The Dhimmi-crats’ increasingly overt Jew-hate and embrace of terrorist sympathizers is going to have an effect. Granted that it takes time for the misplaced loyalties of many American Jews towards the Dhimmi-crat Party to shift.

There are more liberal Jews than conservative Jews.
Liberal Jews are not even Jews – they’re Jewish by culture, but their religion is leftism.

Watching Woody Allen’s old movie Banana’s the other day: the story is about a Castro-like dicator who wins the revolution but then turns on the people becoming a murderous dictator. Yet, throughout the film, Allen mocks American conservatism, and touts American leftism, which has had the same goals as the dictator Allen’s film mocks.

What a cognative disconnect. Yet that’s ALL of hollywood’s mindset.

I have known many, including Milton Freidman.

Liberal Jews have killed more Jews than Hitler, Stalin, Iran and the PLO ever dreamed of.

Over half American Jewry is liberal. Don’t count on liberal Jews for anything, unless you are trying to destroy freedom.

The kind of Jews you’re talking about will never give up on the Democrats, because they are convinced that Republicans and serious Christians are all antisemites. This is not a conclusion they have reached on their own, it’s something that they were raised with and in the absence of any actual religious beliefs this fills the void.

You know the kind of Jews I mean — the kind whose only religious observance the whole year is ostentatiously not celebrating Xmas. They don’t celebrate anything themselves, except maybe a “Liberation seder” that is a cruel parody of an actual seder, and is held anywhere within a week or two of the correct date, but any mention of Xmas wounds them deeply. The kind that think the central principle of Judaism is “Tikun Olam“, which is code for “social justice” and includes fanatical support for abortion, the “Palestinians”, and whichever sexual posture is currently fashionable.

Jews who actually believe in the Jewish religion are much more open to reality, since the niche in their soul that religion is supposed to fill is already full, so politics doesn’t take root there. Most of them already vote Republican, at least for president and congress, and the rest at least tend to be open to the idea.

In short, Democrats with holidays.

A fake election created a coup

A Junta runs our country now.

Our political party is secretly working with the Junta to destrot us.

A useful idiot (austin-fauci) is decimating the military so it will be turned against us.

Our only hope for freedom and safety is secession. And, like NOW – before we have to go into a shooting war for our freedom.

Matt Duss, Bernie’s anti-Semitic foreign policy advisor is about to get a job at the State Department. I can’t get bent out of shape about this. He’s no different from anyone else that Biden has appointed. What’s one more? At least he’s consistent. Everyone there hates Israel.

Case in point: antisemite as Hady Amr has been nominated as “Deputy Assistant Secretary of State for Israel-Palestine”. If his nomination goes through, as it surely will, what more harm can Duss do?

The only harm that can be worse is done by you and I – by continuing to support the GOP in any way.

We need a viable political party. It ain’t the GOP, ever ever again.

Are you doing anything in aid of forming up a new, viable party? Please, let us know. Thank you.

A new party will be much easier if Trump spearheads it. As I said before, I bet Rinos have a brown streak in their drawers over that.

Or, they know that a third-party would be just another Ross Perot fiasco.

Meanwhile we are keeping busy….. saving the world. Breaking news……

Israeli hospital claims may have found cure for COVID-19
Preliminary testing shows that 29 out of 30 virus patients in serious condition that were administered the drug, dubbed EXO-CD24, once a day made a full recovery within five days; similar treatment announced by Hadassah Medical Center