“seems like a very white supremacy ideology to conform…privilege you guys….check it” 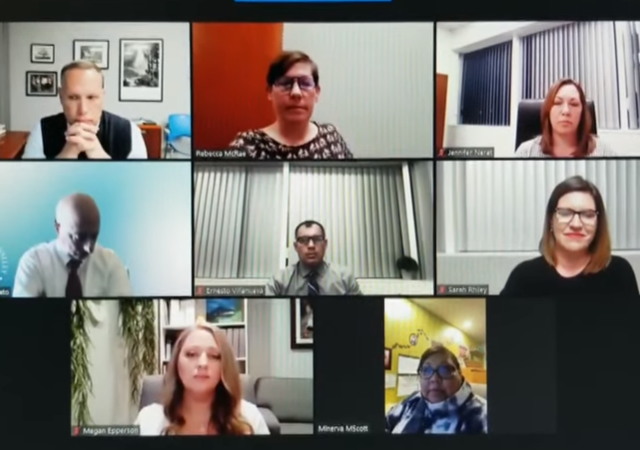 Once again, a California school board member has been caught saying something outrageous on camera without realizing the event was public. The last time something like this happened was less than a week ago.

During an argument over reopening schools in La Mesa, California, the member compared it to slavery and white supremacy. Total lunacy.

We Have Another School Board Hot Mic Fiasco. Want to Guess What Was Said? Hint: It’s Full-Blown Woke.

It happened again. Granted, this example has a dash more of woke salt in it, but it’s still another school board that’s about to deal with a mic fiasco. It’s also a boomer moment as these clowns didn’t know that their video call was being broadcast publicly.

Chardá Bell-Fontenot, the vice president of the La Mesa-Spring Valley School Board outside of San Diego, said that reopening schools was akin to slavery and an exercise in white supremacy. The Daily Caller’s Jorge Ventura has the clips and notes that Ms. Bell-Fontenot seems unaware that everything she is saying could be viewed by the general public.

CBS 8 in California has more details:

A La Mesa-Spring Valley school board member is facing criticism for comments she made at a board meeting Tuesday night. While discussing an upcoming vote on the district’s reopening plan trustee, Charda Bell-Fontenot, made comments about white supremacy and racism.

That board member is a Black woman, as well as the board’s vice president. The comments were made over the course of several minutes. It started off when other board members said they needed to vote on a return to school date.

Bell-Fontenot followed up asking several questions, saying they needed more information and that she didn’t feel like she had to vote on the topic that night. In recorded video from the meeting, Bell-Fontenot’s video is off, but you can hear her voice as she reacts to other members.

“I know what we are doing is wrong. That seems like a very white supremacy ideology to conform…privilege you guys….check it……I’m not gonna force anyone to do what they don’t wanna do. That’s what slavery is. I’m not gonna be a part of it,” Bell-Fontenot said.

La Mesa-Spring Valley School Board member compares reopening schools to slavery and "very white supremacist ideology", said board VP Chardá Bell-Fontenot, another members mentions that '70 to 80 %' of families and students want to return to school. (1/2) pic.twitter.com/XNGcvxAIoW

Similar to the Oakley school situation, she's seems unaware that the meeting is being recorded. "If our meeting were actually recorded for the public, we would know that." pic.twitter.com/bFWjaYlLfp

In this case, it almost seems like the board member was just randomly throwing in these words because she thought of them as power words. They are essentially “shut up and listen to me” comments.

If I move any farther away from California I’ll be in the Atlantic Ocean. I may consider that option if the craziness turns out to be infectious.

This is all over the nation. Until we get our kids out of the hands of these malignant maniacs, forget it.

In fact, it may be too late.

But not to secede, and have schools clean from this garbage.

Schools are related to East Asian supremacy, not white supremacy. East Asians do better than whites.

When will people wake up. They will continue to be played for fools. Using the race card is despicable and wrong.

I’ve never seen someone say “listen to me because I’m white” but many people seem willing to say, essentially, “don’t listen to him/her because he/she is white”.

Silence is violence – they say. But the only silencing I see – are whites and asians being silenced solely due to their skin color. And insulted as “white supremacist or racists if they happen to present an opposing point-of-view.

It will only end when large numbers push back against the this irrational and caustic agenda.

Actually Ben, you have. These 8 white lazy jackasses.

Who knew we all warped back to 1960s South Africa and didn’t even know it?

Why didn’t the school board members call her out as a racist??? Those were clearly racist comments.

As for privilege – she was the only one exerting any. And the others were too meek or scared to push back. One guy pushed back in the lightest and politest way possible. But she was not shy about cutting him down with acerbic comments like she was boss of him. Power & control is what this is all about.

I remember the guy at the school board meeting in VA last month who said “figure it out – or get off the board and let someone take your spot a nd they’ll figure it out.” WE NEED MORE PEOPLE LIKE HIM.

According to this very woke logic, it is “white” to want your kids to go to school, and “black” to not want them to go.

This seems like an ugly racist stereotype to me; many black parents want their children in school and learning.

The racist should apologize to all black parents.

Good black parents should be speaking up, should be applying peer pressure on bad black parents, one reason being that they bear the brunt of the bad things which come from poor parenting.

I made a lot of money when I was young, and I invested it in a disco. I was single, so I was motivated in part by being able to pick up party girls.

Liquor control was on our tail about underage people getting into the bar. So we started checking ID, and refusing entry if people could not prove their age. One that I kicked out can back with ID, she was 26. There was another which was 16, and she had a year old baby. I used to take her and the baby out for dinner, but it was a strict hands off situation.

16 years later I was building my farm from scratch, and I hired lots of young labors to held me build a road, and to do clearing of 13 wooded acres.

I hired a 17 year boy, it turned out that he was the baby and his mother, who came from a good family, had gone on to have a string of children, all different fathers.

My instincts were right. She was really cute, and nothing but trouble.

Even with good families, some children turn out to be bad seeds, with bad families most turn out bad.

Adam and Eve disappointed their Father. We are their descendents.

So says a woman with a hyphenated name. Figures…

It’s been 50 years since I was in California, but I don’t remember such butt ugly women being there. smh

lived there myself for a few years–couldn’t agree more–for a while(at least in socal)thought there must be a factory somewhere putting them out–blonde, blue-eyed, lithesome, tan with an adventurous spirit/heart

Proof that this is complete nonsense and all of it an excuse to do as the “aggrieved” wish. In and of itself a privilege and supremacy over society at large.

?? cool and lean and oh so lovely
The girl from Pasadena goes walkin’…

If I had to interact with these idiots, I’d tell them to drop their infantile, narcissistic, self-congratulatory and Orwellian Dhimmi-crat lexicon, and speak in normal English, as that language is understood by rational people.

Being rational is a white concept…

I don’t know…fenced in, not allowed to leave at will, propaganda shoved down your throat, bullied by staff as well as other inmates….uh…students…arbitrary rules that are arbitrarily enforced according to the whims of whoever decided to take action that day, I’d say there’s elements of slavery involved there, but probably not the way she means. Personally, I think the shut downs will ultimately be one of the best things that comes out of COVID – so many parents are finally understanding what the school systems have been doing to their children. And I say this as a former teacher.

The message couldn’t be more clearer in Chicago. Parents have to see that the tax fattened parasites in the teachers union don’t give a crap about educating the kids. Every private school has been open since August without issue and yet the CTU is fighting to stay out of work so they can get more free money.

This was Mayor Groot’s crisis and the tough talking idiot who had the nerve to insult the POTUS with “it begins with f and ends with you” has been a meek little lamb when dealing with the union that endorsed her opponent. Wasted a perfectly good crisis when she should have fired those who refused to work.

I’m not gonna force anyone to do what they don’t wanna do. That’s what slavery is.

If that’s what slavery is, I propose we throw off her chains by firing her, immediately.

I think a better title for the story is:
“Closing Schools Compared to Slavery and White Supremacist Ideology.”

“In this case, it almost seems like the board member was just randomly throwing in these words because she thought of them as power words. They are essentially “shut up and listen to me” comments.”

Only in this case? Pay more attention. That’s all they ever are, anywhere. The left is attempting to develop a “Bene Gesserit Voice.” Resist it.

“Chardá Bell-Fontenot, the vice president of the La Mesa-Spring Valley School Board outside of San Diego, said that reopening schools was akin to slavery and an exercise in white supremacy. ”

If schools are this bad, why not close them altogether?