“will be suspended without pay for one week, according to a statement from Press Secretary Jen Psaki” 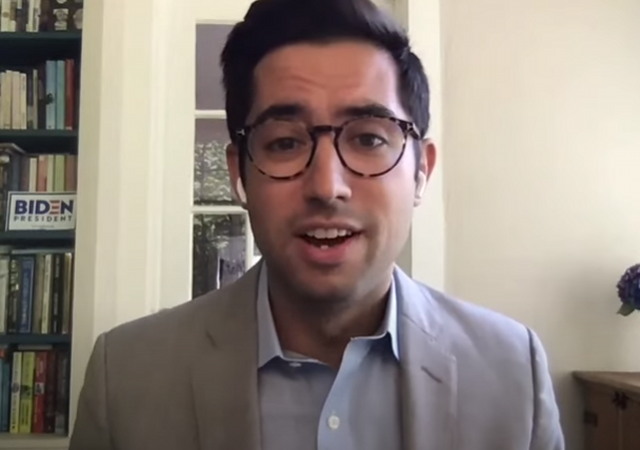 (See bottom of post for update.) TJ Ducklo, the deputy press secretary for the Biden administration, has been suspended from work for one week for allegedly telling a female reporter from Politico “I will destroy you.”

The reporter, Tara Palmeri, was asking questions about a story Ducklo did not want her to cover. Specifically, his romantic relationship with another member of the press.

From Bloomberg News, via Newsmax:

President Joe Biden’s White House has suspended one of its spokespeople after a report that he had threatened a reporter who was investigating his relationship with another journalist.

TJ Ducklo, a longtime Biden campaign aide who serves as deputy press secretary, will be suspended without pay for one week, according to a statement from Press Secretary Jen Psaki.

Vanity Fair reported Friday that Ducklo pressured Tara Palmeri, a Politico reporter, over questions about Ducklo’s relationship with Axios reporter Alexi McCammond. “I will destroy you,” Ducklo allegedly told Palmeri, according to Vanity Fair, which cited two sources it didn’t identify. Ducklo and McCammond went public with their relationship in a People magazine story.

The White House struggled with this situation because it conflicts with something Biden said just a few weeks ago. Biden not only said this type of behavior wouldn’t be permitted, he said it would get you fired instantly.

White House press secretary Jen Psaki waffled Friday when grilled on TJ Ducklo’s one-week suspension for threatening a journalist — even though President Biden has vowed to fire his aides “on the spot” for harassment.

Psaki said the remarks from Ducklo — who threatened to “destroy” Politico reporter Tara Palmeri for reporting about his personal relationship — were “completely unacceptable” but refused to address why he wasn’t outright fired.

“We felt it was a serious punishment,” Psaki told reporters at a White House press briefing.

Biden’s zero-tolerance promise came as he swore in his appointees on Inauguration Day.

“I am not joking when I say this, if you are ever working with me and I hear you treat another colleague with disrespect … talk down to someone, I promise you I will fire you on the spot,” he said at the time. “On the spot. No ifs, ands or buts. Everybody is entitled to be treated with decency and dignity. That’s been missing in a big way the last four years.”

See the video of Biden’s remarks below:

Biden 3 weeks ago: "If you’re ever working with me and I hear you treat another colleague with disrespect, talk down to someone, I promise you I will fire you on the spot, on the spot. No if, ands, or buts. Everybody — everybody is entitled to be treated with decency & dignity." pic.twitter.com/0QDHnyU3Jo

Ducklo tried to intimidate Palmeri by phone in an effort to kill the story. “I will destroy you," Ducklo told her, according to sources, adding that he would ruin her reputation if she published it.https://t.co/XhznGQcyse

This quick clip from last September will give you a glimpse into TJ Ducklo’s personality. Wow.

Video: Here's just a sample of the back-and-forth between Fox News Channel's @BretBaier and TJ Ducklo from the Biden campaign. Baier repeatedly asked the simple question of what Biden would have done differently on COVID, and Ducklo accuses him of being a Trump campaign stooge pic.twitter.com/kQw9PZJAUk

It’s fun to imagine the media’s reaction if someone who worked for the Trump White House threatened to “destroy” a female journalist. It would have been a weeks long scandal, there would be demands for his firing, and it would be described as an assault not only on the First Amendment but on all women.

My statement on resigning from the White House. pic.twitter.com/3Jpiiv75vB

This is what happens when a pajama boy thinks he is powerful and tough. What a pathetic imitation of a man.

The only thing that pencil-necked little pansy has ever ‘destroyed’ is his boyfriends anus.

Give him a Kbar and my 60 year old sister could still take him down and hurt him.

Maybe he so touchy because Dingaling is too small.

One of many pathetic imitations of masculinity that make up all-things-Biden.

Just what I was thinking – another pajama boy.

the good thing about Biden’s promise to fire anyone disrespectful: liberals are selfish, they cannot help themselves from demeaning others; it is the only way they can feel good about themselves. They’ll run through aids and admin members faster than Trump

They won’t. You are right about progs, but they have another character trait: rampant hypocrisy. They might sacrifice one or two, but they don’t expect a prog to be bound by duty, honor, or principles.

Biden intentionally embraces swamp critters, Trump knew they were there, but did not understand the full scope of the problem.

Having worked in the Beltway, I learned the hard way again and again, just how hard it is to recognize bad apples.

.
I understand Ducklo has had serious health issues. I wish him well…and a long, pitiful career in obscurity.

What an idiotic scold, a model Dumbocrat!

The female members of the White House Press Corps should refuse to interact with the guy if he’s brought back. Will they? No.

Before I retired if somebody did this they would have been fired. Our HR canned a few guys that tried this out. Their male co-workers were happy to get rid of the bad apples.

You better believe there’s a fucking war being waged on women and its being waged whole heartedly by Democrats.

Don’t forget that important naval engagement, the Battle of Chappaquiddick.

Back to the most ethical and transparent administration of the Obama years.

“will be suspended without pay for one week”

Probably the first million dollars the Biden administration has ever saved.

The inequity is apparent.

This dilbert received a one week suspension without pay from Joe Brains for shouting at and threatening a woman.

When someone in that position threatens a member of the press by saying: “I will destroy you”, this was not a spontaneous thought, but rather a sentiment and tactic drilled into the head of the deputy press secretary’s head well before he makes the statement.

In other words: “I will destroy you” is the position to opposition to the fraudulently elected president fronting for a military Junta that governs our land:

In anticipation of PDJT forming a third party – or remaining captain of a ship of rats, the GOP (for what that’s worth ), the rino swamp class is announcing they are considering forming a breakaway party. (They have not decided on a name yet, though “RINO Swamp Party” would at least be accurate.)

Read the list of these assholes. All that’s missing is George Conway, Steve Schmidt and a child molester at the helm:
https://www.cbsnews.com/news/new-republican-party-former-gop-officials-trump/

All that said: we need to leave it all behind. ALL of it: D.C., the eastern welfare states, the riots, the ny time, CNN, the high taxes – and most of all: creeping Communist Chinese fascism by proxy (soon, they will completely own our nation – the irony is that the cash they are using to bribe a good part of our nation into treason has come from our own treasury).

Now that the GOP swamp class wants to destroy the GOP that is purportedly in Trump’s hands, Trump should NOT remain head of a rotting GOP – he should form his own party. The GOP Swamp party will be a party without a base.

Trump is the first trillionare (with a “T”) in the waiting: if he ventures into competition for facebook, twitter, youtube – and even amazon – he will own them all. (My Pillow is just a microcosm of this potential: Mike Lindell is worth 300 million dollars. But he has to make things. A Trump social media platform merely hosts servers and maintains them – and it will siphon hundreds of millions of people away from the leftist garbage platforms, many who are there by necessity for business.) If Trump forms a news network and hires the likes of Fox’s remaining conservative talent, it will be king ON DAY ONE.

All that said: we STILL have to get out of here. When a government official openly announces “I will destroy you” as a threat to a private citizen reporter asking a question – and then gets a week off – only the truly blind cannot see the blood, violence and chaos against us that is being planned by the Junta government in charge of our former country.

Biden’s zero-tolerance promise came as he swore in his appointees on Inauguration Day.

And like all Biden’s other “promises” they all went the window the minute he was installed as the president. So why is anyone surprised that Ducklo still has his job despite Biden saying anyone that harasses women will be “fired on the spot”.

The fog of war. A veritable Arab Spring. A feminist ally. Keep women appointed, available, and taxable. That said, throw another baby on the barbie, cannibalize her profitable parts, sequester her carbon pollutants, it’s over.

Biden lies. But then Palmeri was employed by the wrong paper, so perhaps he thinks it’s okay? If she had been a CNN reporter, odds are better that Ducklio would have been fired, or at least suspended for a month or so.

I see the pussy has resigned. It’s embarrassing to see who represents the fraud in the WH.

I hope his squeeze dumps him.

I bet she did as soon as he resigned. He’s no use to her as a ex deputy secretary. No job, no girl, might as well move to SF and break into cars.

Sure it is. I’ve been accused on occasion of having unreconstructed attitudes toward current society and the social skills of a rutting billy goat.

But it would never occur to me, if I were in the public eye, to call a reporter who inquired about a legitimate issue, accuse her of just being jealous because someone didn’t want to “f*ck her,” then threaten to destroy her.

Hell, even though I’ve never been a public figure that’s the kind of thing that wouldn’t pass the “Grandma test” I used to apply when I’d be out on liberty in a seedy foreign port. As in, “Do I really want my grandma reading about this potential liberty incident in the newspapers tomorrow?”

I’ve never been so hammered that the answer to doing something like this Ducklo thing would have been “Yes!” Apparently this Ducklo dude did this when he was entirely sober.

Me? I would have gotten my @$$ back to the ship and hit the rack before I made that phone call.