“We believe in the right of individuals and organizations to peacefully express their views, independent of the degree to which the perspectives of those hosting meetings and events at our hotels align with ours,” Hyatt Hotels said in a statement. 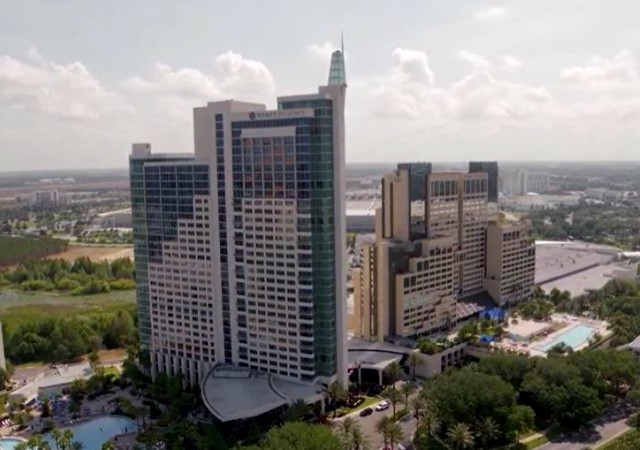 In response to a campaign started by disgraced “grim reaper” lawyer Daniel Uhlfelder, Loews Hotels announced last month that they would no longer be hosting a scheduled fundraiser for Sen. Josh Hawley (R-MO) in Florida on grounds that the chain was “opposed” to anyone who “supported and incited” the actions of the Capitol rioters.

“We are horrified and opposed to the events at the Capitol and all who supported and incited the actions,” Loews said in a tweet at the time. “In light of those events and for the safety of our guests and team members, we have informed the host of the Feb. fundraiser that it will no longer be held at Loews Hotels.”

As CPAC got underway a few days ago in Orlando, Florida, leftists who apparently just figured out that the annual conservative conference was being held at the Hyatt Regency took to the Twitter machine to demand Hyatt cancel hosting the event, suggesting that if Hyatt didn’t meet their demands they’d be boycotting their hotels in the future.

Those calls escalated this weekend when Twitter leftists began making idiotic comparisons between the CPAC stage and Nazi symbolism:

Are you okay with Nazi symbols being used on your properties?

Because if you fail to speak out & do something about this immediately, I’ll be sure to no longer patronize any of your properties ever again. #CPAC2021 #CPACstage #CPACNazi pic.twitter.com/beFauYAMwO

On Friday, the popular hotel chain issued a statement in response to the cancel/boycott campaign, taking a decidedly different and refreshing approach to online outrage mobs by letting them know Hyatt was an “inclusive” hotel chain that believes “in the right of individuals and organizations to peacefully express their views”:

“We take pride in operating a highly inclusive environment and we believe that the facilitation of gatherings is a central element of what we do as a hospitality company,” the spokesperson said. “We believe in the right of individuals and organizations to peacefully express their views, independent of the degree to which the perspectives of those hosting meetings and events at our hotels align with ours. Our own values support a culture that is characterized by empathy, respect and diversity of opinions and backgrounds, and we strive to bring this to light through what we do and how we engage with those in our care.”

Naturally, perpetually offended leftists like Uhlfelder, actress Alyssa Milano, and other prominent leftwing activists tried shaming Hyatt by ramping up calls to boycott them in protest:

There were also declarations about how “the world now equates Hyatt with hate and neo-Nazism” (reality check: it doesn’t):

The world now equates @Hyatt with hate and neo-Nazism. Republicans launched the hotel chain’s new branding message at #CPAC2021. Hyatt’s hosting of anti-Semites and white supremacists, boasting a stage Hitler would have approved, is wholly offensive and will not be forgotten. pic.twitter.com/tVEUlyLZID

A New York Times bestselling author with the last name Hyatt but who is unaffiliated with the hotel said he’s even been targeted by the left and wants it to stop:

Some people on Twitter want to boycott Hyatt Hotels for hosting the Conservative Political Action Conference (CPAC). They’ve added me to the boycott simply because my last name is Hyatt. I’ve never had anything to do with Hyatt Hotels. If you’re in this group, please stop.

Conservatives praised Hyatt Hotels for having the guts to go against the grain by not bowing to the mob:

Shoutout to @Hyatt. They just stood up to the whiny, media mob at #CPAC2021 and released a statement:

“We take pride in operating a highly inclusive environment and we believe that the facilitation of gatherings is a central element of what we do as a hospitality company.” pic.twitter.com/vXZExCy0tt

Because @Hyatt stood up to the cancel mob, I will be booking them for many of my vacations in the future. Good job Hyatt

Good for Hyatt! Standing firm in their decision to host CPAC. Finally, a company pushing back on the McCarthyite cancel culture! “Our own values support a culture that is characterized by empathy, respect and diversity of opinions and backgrounds.” Amen. https://t.co/XUOaIO4N79

Perfect from Hyatt against cancel culture “We believe in the right of individuals and organizations to peacefully express their views, independent of the degree to which the perspectives of those hosting meetings and events at our hotels align with ours” https://t.co/urQpOaDauf

Rep. Mark Walker (R-NC), who in December declared his candidacy for the U.S. Senate, quipped about the “self-fulfilling prophecy” of leftists trying to cancel Hyatt considering the theme of this year’s CPAC event:

In a self fulfilling prophecy, intolerant liberals are now trying to cancel Hyatt for hosting #CPAC’s forum called #AmericaUnCancelled.

An interesting side note to all of this is who controls Hyatt Hotels:

Ironically Hyatt, though a public company, is controlled by the Pritzker family. J.B. Pritzker is the Democratic governor of Illinois. Penny Pritzker was President Obama’s Secretary of Commerce.

Obviously, with CPAC underway as of Thursday, there’s no way Hyatt would have been able to back out of hosting it even if they wanted to do so. But if they’d had any regrets, they could have tried to placate the offended left-wingers by mentioning something in their statement about how they would do a more careful review of the groups they allow to stage events at their hotels going forward.

They could have, but they didn’t. And that’s to their credit.

If Hyatt stands behind their statement, it may signal a turning point in how companies deal with coordinated attempts by the left to either cancel businesses/people and/or shut down speech they don’t like by taking away the venues conservatives can use to get their message out.

Conservatives should hope Hyatt stands firm. Because all it takes is one well-known company to start a trend, to begin the process of stemming the tide against toxic cancel culture. Goodness knows that is sorely needed now more than ever.

Good for nothing – every dime in revenue is more money in Governor Putzker pocket. His Sister Penny Pritzker is in the Obama inner circle.

Because of the Putzker – Obama ties, Hyatt is the largest Hotel Chain in China. Plans are to build 50 more Hyatts across Red China in the next two years.

The city with one of the biggest Hyatt Hotels? Wuhan!

For the lawyers here: if the progressive nutters succeeded in driving business away from Hyatt, and such a thing could be proven in a court of law, would Hyatt have a claim for tortious interference (intentional interference with contractual relations)?

I can think of no way better to stop cancel culture than to use the law to go after the hard-left groups that are behind it, and a few successful claims for tortious interference would seem to be a way to do just that.

Were that true – Chick Filet could crush the leftists.

Chick-filet sold out to the left a few years ago
If you don’t remember.. they put leftists on their board amd stopped contributing to Salvation Army among others

I haven’t eaten there since

I never have understood what all the hoo hah was about Chick Fil A. I ate at several. Meh. Then, last year, they thought I should shine a black men’s shoes, and other pro-rioter rhetoric. I will now never go back.

There would be no remedy the court could impose, since the ranting twits have no money, and the deep pockets tend not to endanger themselves so openly.

“Ironically Hyatt, though a public company, is controlled by the Pritzker family. J.B. Pritzker is the Democratic governor of Illinois. Penny Pritzker was President Obama’s Secretary of Commerce.” Is this really where we are? A couple of Twitter donks try to fake cancel them so that we’ll spend our money there. We can’t possibly be this dumb. Make your reservations at Hyatt to support the Pritzkers. AYFKM!

A Nazi stage? Even the Nazis themselves wouldn’t recognize this as a Nazi stage. Why does anyone take these twitter morons seriously?

I’m anxiously awaiting the time that one of these prog cunts calls me a Nazi or a Racist to my face. I’m going to stomp a mudhole is their face when they do.

The time for vigorous, kinetic pushback against this wholesale character assassination is long past.

It’ll never happen to you Paul because the majority of leftists are cowardly pissants hiding in mommies basement. Soy boys and hyper partisan, ignorant females. To compare any American politician to nazis shows how completely uneducated and stupid they are.

You have to take a lot of crack and/or acid to see th Ed resemblance but hey, that’s how Dems roll. Just ask Hunter.

The operative word is “morons”

A Nazi stage? Even the Nazis themselves wouldn’t recognize this as a Nazi stage. Why does anyone take these twitter morons seriously?

It never ceases to amaze me that it seems that only the lunatic leftists are able to make the connection between the shape of a stage and a nazi symbol. Any normal people out on the street would never make that association. They’d just see a stage with walkways. But here we are

Oh, and nobody really takes these twitter lunatics seriously outside of their little echo chamber of hysterical leftist lunatics that infest Twitter. The rest of us just roll our eyes and get on with life.

Paranoid schizophrenia is bipartisan. On our side, we have the Q kabbalists.

As one currently suffering under the disastrous non-leadership of FatAss Pritzker, I will not, either now or in the future, spend one red cent at a Hyatt property. Lardbutt has already stolen enough of my money; sure as hell neither he nor any of his perverted clan need more of it.

Unite and in one voice, we must tell these people to go screw themselves.

Their boycott tactics worked so well with Goya that they recorded a sharp and prolonged uptick in sales. And they made the dim witted AOC employee of the month.

It’s nice, too, because Hyatt is owned by the Pritzker family, members of which are the Democraic current governor of Illinois and former Democratic commerce secretary under Obama. It doesn’t matter to me the motivation, because the company is doing the right thing.

Business is business and they could have booked at Miralago if it is large enough.

The Left decided to Boycott Chick Fil-A a few years back, as far as I know, it hasn’t hurt their bottom line any.

I believe Hyatt has since caved. I’m not big on boycotts, but I have started to STOP patronizing businesses that cave or unnecessarily bore me with how ‘woke’ they are. My shelves are stocked with GOYA, good products made in the USA, usually cheaper as well…thank you progressives for introducing me to the brand.