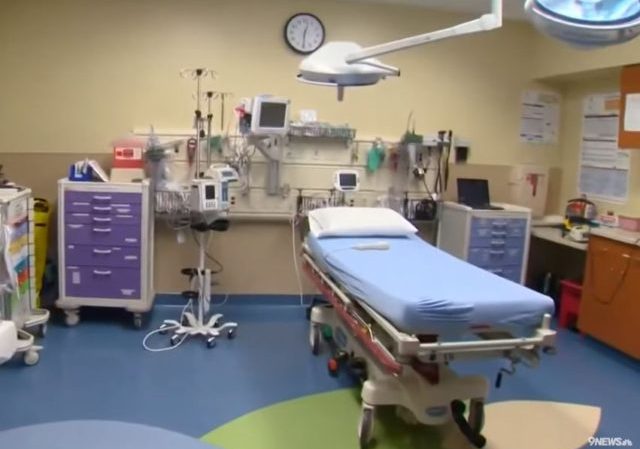 Healthcare workers in San Diego County are trying to deal with the COVID pandemic but are reportedly being forced to confront their ‘white privilege’ at the same time.

A required Critical Race Training course that takes hours to complete forces the workers to understand that racism is a white problem.

Government employees in San Diego County are being forced to undergo lectures that claim only white people can be racist, according to an employee who says the training is taking away from their efforts to battle COVID-19 and a homelessness epidemic.

The Health & Human Services Agency required employees to spend six hours watching the online racism course, a training participant told the Washington Examiner. Critical Race Theory classes taught participants “Racism is a WHITE” problem, and, “Only white people can be racist.” The title of the course is ‘Power and Privilege.’

“This training is lumping people into groups, and it has not explained how some (minority) individuals have succeeded in this systemically racist country — like Barack Obama, NBA/NFL players who make millions, Dr. Ben Carson, Oprah, and Whoopi Goldberg, to name a few,” the employee said. The Washington Examiner is not identifying the employee, who asked to remain anonymous over fears of retaliation.

The employee claims that instructor Reggie Caldwell told participants, “Only white people can be racist, no other BIPOC’s (Black, Indian, and people of color) can be racist.”

Teachers in San Diego went through a similar program back in December.

A school district in San Diego held “white privilege” training for teachers in which they were told, “you are racist” and asked to commit to becoming “anti-racist” in the classroom, according to a report.

The San Diego Unified School District began the sessions with instructors telling the faculty members that they will experience “guilt, anger, apathy [and] closed-mindedness” because of their “white fragility,” according to leaked documents obtained by journalist Christopher F. Rufo.

During the voluntary training, the teachers were taught about “land acknowledgment” and asked to accept that the US was established on stolen Native American land, the report said.

They also learned about the teachings of “White Fragility” author Robin DiAngelo and “Be Antiracist: A Journal for Awareness, Reflection and Action” author Ibram X. Kend.

The pandemic has prevented schools, churches, and businesses from opening, but it has not stopped the left from conducting these training sessions all over the country. What does that tell you?

Sock it to me!

Amen brother. If I wandered into a class like this I would walk out and tell the racist apologist that is rent-seeking by voicing this propaganda to kiss my white ass.

Better to have more than one do it. “What will you do? Fire ALL of us?”

This will only stop when white people reassert their control over their own country. Yes. I went there.

During BLM week at our kid’s school, we embraced our “privilege” and went to Cancun. Something that will be a tradition of ours during BLM week moving forward.

Incidentally, this year was the most black people I’ve seen at one of these resorts. In talking with them, they all had kids, but dumped them off at relatives to jet off on vacation. Many were there on a romantic get away with bfriend/gfriend. We’ve NEVER gone on a vacation w/out our kid. Neither did our parents. In fact we often BRING the grandparents on these vacations.

Try teaching that at your critical race training. Of course it were, it would be positioned as “spending time together as a nuclear family is racist.”

Not only did we always take the children, most of our vacations were planned to be educational.

What about Slavs? Can they be racist, since their ancestors were held in slavery throughout Europe and Russia? Even the word Slav means slave, after all. And there’s no doubt the Jewish people were held in slavery in Egypt. I’ll bet there are at least a dozen other ethnic groups with similar experiences in chains.

Jews were enslaved in Europe last century. Virtually all the survivors picked up the pieces and went on with their lives.

Negro slavery ended in1865. What excuse do blacks have, aside from being whiny, sniveling crybabies?

In the battle for the heart and soul of Blacks… George Washington Carner and Booker T. Washington (hum..racist name sakes) “lost’ out to W.E.B. Debois and the NAACP. That path led back to the plantation rather than true black empowerment.

Slavery was common, I suspect that everyone has ancestors far back in in their linage who were enslaved.

I’m trying hard not to hate these vile racists with their constant vomit of vile racism, but they’re BEGGING me to hate them with a red hot hatred reserved for hell’s imps.

How about calling it Critical Hate Training ?

The scream RACIST if they don’t get what they want.

Why don’t Conservatives scream racist back? Since they are actual racists? Why do conservatives always have to civil and polite? I guess most were brought up that way. But now, NOW, we have to fight fire with fire.

2. BIDEN RACIST SOCIAL / EDUCATION POLICIES. Forcing (or at least not stopping) the indoctrination program that is anti-White and Asian.

3. BIDEN RACIST ECONOMIC POLICY. Directing by preference Covid aid and Small business aid to any and every group except Whites (as Biden said directly in his press conferences and press releases on this topic).

Call out the BIDEN Administration and all the woke adherents.

Izzat so, only whites can be rayciss? Try walking down MLK street.

So triage is no longer the rule? How is this going to end well?

“During the voluntary training, the teachers were taught about “land acknowledgment” and asked to accept that the US was established on stolen Native American land, the report said.”

First, it’s not “voluntary” , it’s “volun-told”, since you will be marked if you refuse to attend. Ask Chinese peasants what happened if they did not attend “voluntary mass meetings” during Mao’s reign of terror.

the US was established on stolen Native American land

No one on this planet is living on land that wasn’t stolen from someone else some time in the past. Many times over.

No nation or ethnic group of people on this planet has a history devoid of deeds that in the present day are deemed immoral and unethical.

Evidently every group of people owes one or more other groups of people reparations based on what their ancestors did many hundreds and/or thousands of years ago.

That’s the ‘logic’ and ‘reasoning’ of Critical Race Theory.

Only white people can be racist

The Ministry of Truth has redefined ‘racist’. And things that are racist.

What comes next is predictable.

Next, concentration / indoctrination camps for the resistors. Prison / solitary for the worst offenders to set an example for others.

This is exactly what Carano was describing.

Why not get the entire course via a FOIA and provide a detailed review?

Seeing how hard they fight that FOIA request might be instructive.

Or at least amusing. (For a certain definition of amusing, rather like the definition of ‘interesting’ in the proverbial Chinese curse.)

will every immigrant e required to attend the same classes as part of their path to citizenship?

Only the few whites we still let in.

White people are automatically racist. Only recognized persons of color may exhibit personal biases, and they may exhibit them in whatever manner pleases them. No one may object, because that is racism. White people (or anyone labelled as white 0 i.e. white hispanics, jews, etc) may not express any sentiment or behavior or involuntary body twitch that could possibly be arbitrarily perceived as racist. If an accusation is made, founded or not, it will be acted upon, and the white person will be disciplined accordingly.

Do I have that right?

I’m afraid you do…

We heard this sort of thing before during the last century: “Die Weiße sind unser Unglück!”

P.S. Nice typo on the slide. I guess spelling’s racist.
P.P.S. White (!) font on yellow or red is impossible for low vision and some colorblind people to see. Yay inclusivity.

This is a Course based on false ideas. That is their opinion, not the truth. We don’t accept it, and opt out to MLK’s views. I wish someone would write out a training session based on MLK’s views, and people can see the difference.

It’s hard to imagine a more racist statement. Or boneheaded one.

Is the plural of POC POCs? Or, POX?

No, tell them that they cannot pound white sand, that they must pound just black sand.

Yes, there is naturally occurring black sand, though it is uncommon, a minority sand.

I is often mixed with low quality top soil and dung to manufacture a quality topsoil.

A telling comment over at airliners.net. The subject is the United Airlines plane with a Pratt & Whitney engine that went bang. Lots of P&W engines are exhibiting failures of this nature.

I worked for P&W many years ago in CT. What a joke that place was. Poor leadership and engineering talent was not up to par. In my estimation, their hiring focused too much on skin color or gender rather than on qualification. .