“Rather than remove this content, we want to acknowledge its harmful impact, learn from it and spark conversations to create a more inclusive future together.” 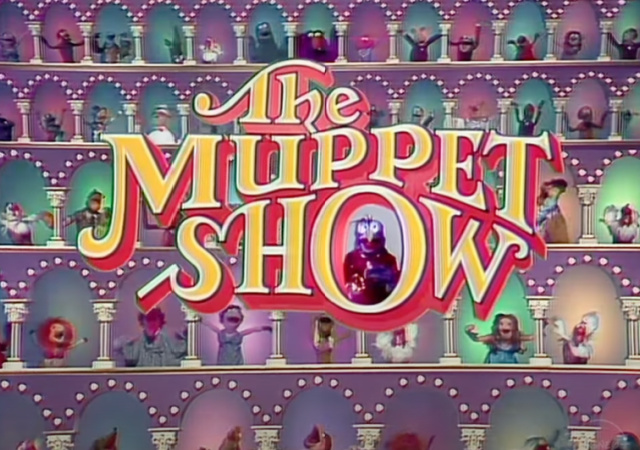 Disney+ added five seasons of The Muppet Show, but viewers noticed it came with an “offensive content” label. The Daily Mail reported you can only watch it on an adult account.

This program includes negative depictions and/or mistreatment of people or cultures. These stereotypes were wrong then and are wrong now. Rather than remove this content, we want to acknowledge its harmful impact, learn from it and spark conversations to create a more inclusive future together.

Disney is committed to creating stories with inspirational and aspirational themes that reflect the rich diversity of the human experience around the globe.

To learn more about how stories have impacted society visit: www.Disney.com/StoriesMatter

Disney won’t even tell us what offensive material is found in the show. How can you have a conversation about it if you won’t tell us what’s offensive?

We can take obvious guesses like when Johnny Cash performed in front of a Confederate flag.

So I guess people will stop listening to Johnny Cash, too? I doubt that will happen even though he performed with a Confederate flag!

At least America still has The Muppet Show. The Daily Mail reported that some episodes “have disappeared entirely from British screens.”

I took pictures of it on my TV. 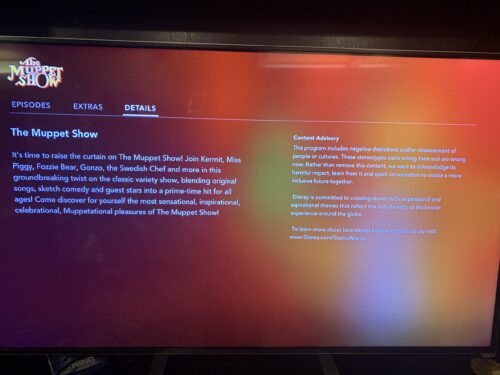 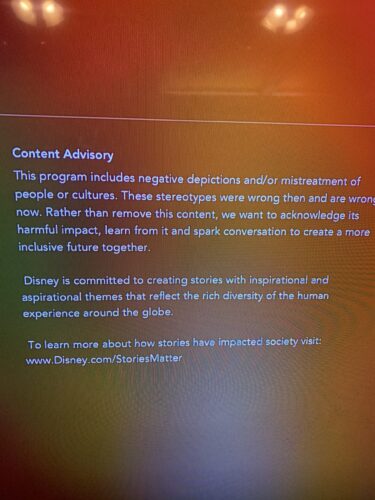 Disney+ adds disclaimer to some episodes of 'The Muppets Show,' which started streaming Friday. pic.twitter.com/nO1qz3yRpn

So all five series (seasons) of The Muppet Show are now on Disney+. That’s a good thing. The weird thing though is the disclaimer they put up. Really?? It’s The Muppets for God’s sake. pic.twitter.com/OKd8jQF1GL

So what is next? Disney already placed the label on some movies like Dumbo, Peter Pan, and The Aristocats.

Disney fired Gina Carano for her social media posts, even though the post in question is historically correct. But Carano committed the Cardinal sin in Hollywood: she is an outspoken conservative!

Again, this is from the company that filmed Mulan right next to Uighur concentration camps in China. It also brushed aside criticism because the location was only in the movie for 78 seconds.

If the content is offensive, why is Disney making it available at all?

I’d like to say something altruistic about censorship being wrong… but this is Disney, so you know it is about the money. Personally, I’m just glad the Muppet Show is still available in the world.

A number of years ago, Sesame Street did a show about the letter K. I think that show must be banned.

Pretty sure the one they did about the letter N is available only on the Dark Web.

I guess in the future we’ll all have to amuse our kids by playing them reruns of Sharia Lewis and her little pal Limbchop.

Some people need to be really offended more.

Public Consumer Product/Services companies are HIGHLY VULNERABLE to the kind of EXTORTION that the Woke Progressives practice.

They do not want to be called a racist company or boycotted. In fact, they will do almost anything to avoid it. They are paranoid that their image will be tarnished. They are, in sum, an easy target. So, you will not find them standing up to “do what’s right”. They cave to whomever screams the loudest.

The right should consider using similar tactics as the Progressives because, in the present situation, we are just bringing a knife to a gun-fight.

To be honest: a LOT of CEOs are worker-than-thou, so they don’t require much pressure. There is such a thing as pushing on an open door.

I think that’s very sector-specific. Smaller cap CEOs are more likely to understand the plight of the worker than larger caps that have trust fund babies and the kind of people that get their job through a wealthy network of family friends.

What do we extort them with? We’re going to call them “unamerican?” They already proudly wear a pin to that effect on their lapels.

The revolution will not have a sense of humor.

Poking them is entertaining, bring them to a boil, when they step out of line, dispense justice.

The Little Mermaid has a content warning about tobacco use. But the blackface fish still appears in Under The Sea . . . FOR NOW!

I feel like I am living in an alternate universe….. this stuff can’t really be happened. Are companies really woke (i.e., stupid) enough to do crazy stuff like this?

Yes. There are enough suckers who buy their (increasingly) crappy products to keep the Wokestapo in power and flush with cash.

So of all the vile disgusting crap Disney forces on us and this is beyond the pale.

I’d cancel Disney Plus but I never subscribed.

So I take it Disney’s Song of the South will never be making it to Disney+ as it is now considered one of the most, if not the most, racist film that Disney ever produced?

I remember seeing SOTS when it was re-released in the 70s. I was able to get the DVD a couple of years ago when I went to a Civil War museum in TX.

22gb remastered version. link to the extras which include commercials also.
iirc torrent contains all versions and the extras

The following will sound like an over-reaction, but this is just another indicator that we are doomed (IMO, of course).

I know of more and more people that have “sold out,” abandoning ship, in this case meaning they’ve given up trying to change the world or do “good works” or even live a “meaningful” life: They’ve gone all in on accumulating enough wealth and property to ensure their and their children’s insulation from the world they see heading our way.

I’m talking lawyers (Harvard & Yale grads, who entered the working world *wicked* lib), tech folk (MSFT and GOOG), doctors (who switched to financial analysis in the biotech industry). These are just folks *I* know–and anecdote ≠ data–but I’m that many others–others who are able–are doing the same thing.

I am sure this is what our politicians are doing, regardless of art do: They don’t care about what is happening to society, i.e., to “other” ppl: They’re just in it for themselves. (Yes, a banal observation: My point is that reg’lar high-performing folks are doing the same.)

When Hillary lost, I thought, “Yes! There’s still hope!” Whether Trump’s was legit or not is irrelevant: The U.S. is headed down Europe Road, and I am brushing up on my Chinese and Arabic.

Watching The Andy Griffith Show on Amazon Prime, and the episodes get slapped with “drug use” (Otis the Drunk? Andy smoking an occasional cigarette?) and “violence” (Ernest T Bass throwing rocks?) labels.

Reminds me of the pearl clutchers who got their knickers in a wad over all the “violence” on The Roadrunner cartoons. So stupid.

Or the tiny gangster who impersonated a baby and Bugs took him in?

When he found that the “baby” was an adult?

The upsy daisy scene was hilarious, but now deleted from the cartoon.

Don’t get me started about “WHERE’S ROCKY! WHERE’S HE HIDIN’!?”

This is just the culmination of what has been going on for decades, in this country. Originally, corporate blackmail was the province of certain “civil rights” groups. It was limited to making a few minor cosmetic changes, if that, and paying the objecting group a large sum of money to leave the corporation alone. It worked, of course. Well, now, every clown with an agenda and a twitter account is doing the same thing. Only, in this case, these budding revolutionaries are not demanding something as sordid as a monetary pay-off. They want to change society into something totally unrecognizable.

The time to make a stand, is when you are still on your feet; not when you are buried up to your neck in the sand which a horde of barbarians on horseback charge down to use your head in a game of polo.

If it requires an “Adult account” to view the stuff, how in the world did the juveniles now running Disney, Inc., manage to gain access to view the content. make their august judgements and slap the label on it?

We really DO need much more adult leadership — the Left is hopelessly lacking in that department.

Waiting for the sexual assault charges to follow for:

kissed the girls and made them cry.

Such overcrowding…
…then again, rather conforms to socialist-preferred population density.

Mary had a little lamb. So! That old goat was the father after all!!!

His fleece was black as soot.
Everywhere that Mary went
His sooty foot he put.

During the rise of Nazi Germany and Imperial Japan, big business supported the fascists, attempting to exploit them for mere money.

Same thing is happening to here in Junta-run America.

Antitrust laws exist for a reason.

Keep giving Disney your money, they’ll keep doing it. Its that simple.

Wow. The MUPPETS, a show expressly targeted at young audiences, are considered adult content? Can these people get any more retarded?

Is this unexpected after they fired Gina Carano?

Disney owns ESPN – so the muppets are worse than the F and N bombs that the pro athletes shout out to each other and the fans.
I say F Disney

I find the actions of the Left offensive and I’ve decided to stop doing business with any company attempting to “cancel” any individual or organization trying to express their viewpoints. I encourage everyone to do the same if you’re tired of these horrible tactics.

The only way we can retaliate against the shameful tactics on the Left is to stop giving them our dollars and support.