Branco Cartoon – On Loan From God

Branco Cartoon – On Loan From God 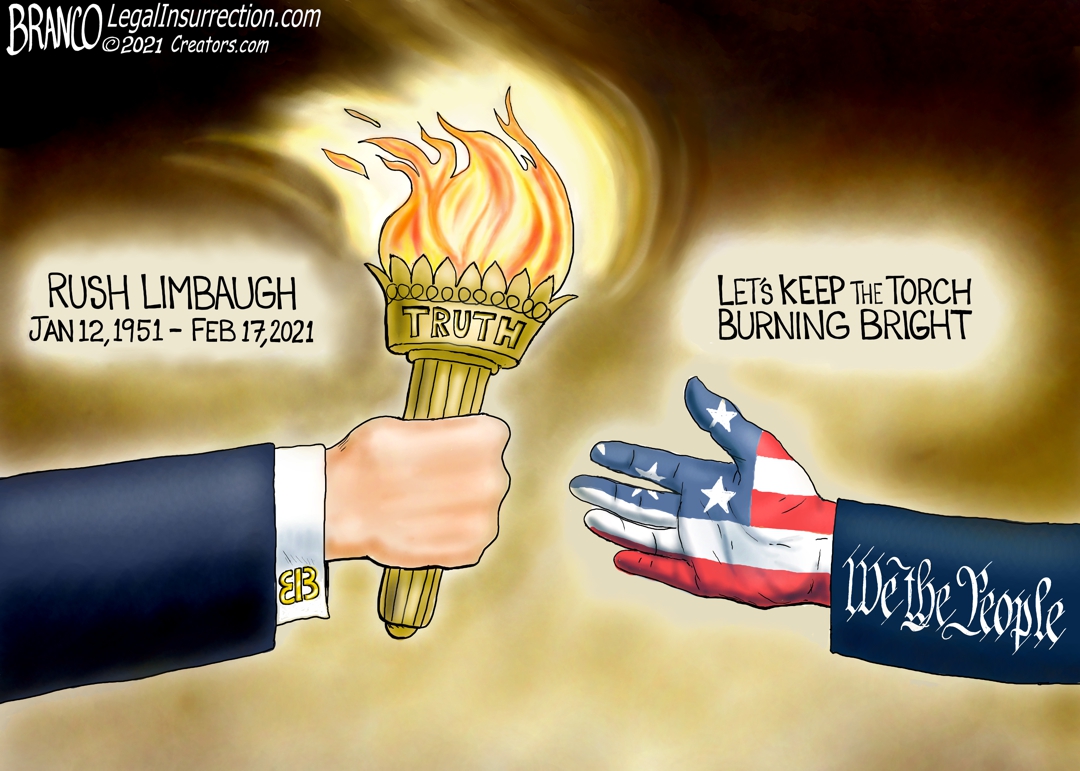 AF Branco’s artwork is like a condensed version of Rush’s radio show. Both very powerful!

You need a snow ball fight between Kerry and Gore!

talent no longer on loan from God

agree/disagree with his politics he was a shining light of free speech. until the last few years i have fought for everyones right to speak/opinion. now i hate to say/write i dont know if i was right all these years. the unpopular opinions ive always thought needed protection have turned their back on us and waged war on the freedoms i/we have bled for.

Fitting. I wasn’t much of a Rush listener, but would catch it on occasion. On one such occasion a decade or so back he mentioned a blog that was a flame thrower of smart conservative legal thinking.

and here I am.

I called in and talked to Rush twice back during the Clinton Admin… I was like a nervous little schoolgirl both times but I’ll treasure both conversations and remember them fairly well.

1st call… I remember making Rush laugh when doing my Bill Clinton impersonation as Bill C. in a then-current Beer commercial at the time saying “I love you, man”. The rest a bit foggy.

2nd call… He “seemed” to be amused by my take on the entire Clinton reign when I said, “Clinton has run the office of the Presidency so low that even He (Clinton) will exceed expectations.

I was really honored this past year to find a few of my cartoons being used in his monthly newsletters.
I’ve been listening to Rush for around 30 years and would be lying if I said he hasn’t shaped a major part of who I am politically and hasn’t been the inspiration behind many of my cartoons.
Thoughts and prayers to go out to his family, and like so many of us here today, I will miss him deeply while pledging to do my small part to continue carrying the torch for truth and liberty.

Memories to cherish Mr. B…

Such a fitting tribute, but dmn… I am weeping again.

I think Rush was at his best during the Clinton years. He was a clear voice in the wilderness before Fox really emerged as an alternative the Clinton News Network.

You found a way to be offensive in an underhanded way. We are all entitled to our opinions, but the comments on the various posts are all to honor him, not indirectly call him a has been.

Mocked homeless people, mocked people who died from AIDS, said drug addicts should go to prison(except for himself), told a black person to “take the bone out of their nose”.

Another Democrat proving that the truth is not in them.

All of the people that I meet with the worst and most inaccurate opinions on Rush were the ones that listened to him least or not at all. Every single time.

And all the “results” you listed, given Rush’s track record, could only have occurred due to his decline from the cancer. Rush was a kingmaker, and President Trump will take over that role.

Rest in peace, Rush. We will carry the torch!

Texans go without power over an event that happens in their areas once every decade.

Californians go without power over events that happen every summer in their area.

Remind me which state are people fleeing to again?

You sound like mark311 but I’m not sure which is more annoyingly, willfully blind. Do you, like he, also humiliate yourself on COTR?
.