Biden to Pay $200 Million in WHO “Obligations,” Reversing Trump’s Decision

Biden to Pay $200 Million in WHO “Obligations,” Reversing Trump’s Decision

Secretary of State Antony Blinken: “It reflects our renewed commitment to ensuring the WHO has the support it needs to lead the global response to the pandemic, even as we work to reform it for the future.” 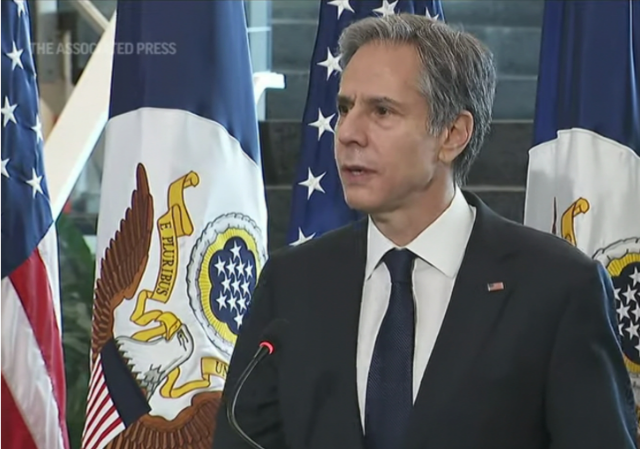 President Joe Biden’s administration will pay more than $200 million to the World Health Organization (WHO), reversing another decision made by the outgoing Trump White House.

Secretary of State Antony Blinken announced on Wednesday, describing the move as “fulfilling” of U.S. “financial obligations” to the United Nations health body.

Voice of America reported Biden administration’s resumption of payment to the WHO:

U.S. Secretary of State Antony Blinken made his international debut at the online meeting. He said the Biden administration will work with partners to expand COVID-19 vaccine manufacturing and distribution capacity, and increase access, including to marginalized populations.

He also said Washington would pay over $200 million in assessed and current obligations to WHO by the end this month. Funding stopped to the organization last year under the Trump administration, which did not like how WHO handled the coronavirus pandemic.

“This is a key step forward in fulfilling our financial obligations as a WHO member,” Blinken said. “It reflects our renewed commitment to ensuring the WHO has the support it needs to lead the global response to the pandemic, even as we work to reform it for the future.”

“The sum amounts to the commitments the United States had made to the global health body, to which it has been the largest donor,” French news agency AFP reported.

Blinken also announced Biden’s plan to “provide significant financial support” to Covax, a global vaccination program led by the WHO and supported by The Bill & Melinda Gates Foundation.

The position taken by Blinken is in sharp contrast to the one held by the Trump administration, which terminated all funding and ties to the WHO last year. In April 2020, Trump stopped all payments to the WHO for its “severely mismanaging and covering up the spread of the coronavirus.”

“I cannot allow American taxpayer dollars to continue to finance an organization that, in its present state, is so clearly not serving America’s interests,” Trump wrote to the WHO in May 2020.

Trump severed ties to the UN health body, accusing it of being under China’s influence.

“China has total control over the World Health Organization despite only paying $40 million per year compared to what the United States has been paying which is approximately $450 million a year,” he said.

The former president also slammed the WHO when it opposed his January 2020 travel ban to slow down the spread of the Chinese virus.

“And they actually criticized and disagreed with my travel ban at the time I did it. And they were wrong,” he said last year.

Trump was right in questioning the WHO’s handling of the Wuhan pandemic and Beijing’s undue influence on the organization.

Tedros began his political career with Ethiopia’s genocidal Derg Marxist regime in the mid-1980s and was backed by Beijing in 2017 for the WHO leadership.

“Chinese diplomats had campaigned hard for the Ethiopian, using Beijing’s financial clout and opaque aid budget to build support for him among developing countries,” British newspaper The Times reported in 2017.

In the wake of the worldwide pandemic, the UN health body has circulated Chinese misinformation and propaganda. At the onset of the contagion outbreak in Wuhan, the Tedros-led WHO denied that the virus could spread from “human-to-human.”

500 million to hunt down every white man in America , yeah, that’s the key…

Don’t give them any ideas.

Ya know, Pervo Joe could have saved himself a LOT of time by simply putting out one EO that said, “EVERYTHING that Orange Man did is hereby CANCELLED.”

I hope he’s paying that “obligation” out of the money he and his family get from China! Leave OUR money alone!!!!!

The US checkbook is open to tinhorns again.

wHO is a wholly owned subsidiary of the Chinese Communist Party. China Joe is just paying his dues with our money.

China Joe will never do anything that hurts China
One of his first EO’s was to outlaw mentioning China and Covid in the same sentence.

Dear President Potato Head….. thanks for p!ssing away another $200M in taxpayer earnings. You are the best, and the WHO is such an honest organization, definitely beyond reproach. /s

In other news, we are giving 6-packs to alcoholics to encourage them to stop drinking.

It could be worse. It could be JCPOA, while Iran backs directs transnational terrorism, and the Obama/Biden administration conducts wars without borders.

Give him time. He’s only been in office a month.

The sleazy, treasonous Susan Rice is the de facto president.

This is literally obama’s third term.

Trump was right to pursue early treatments (e.g. HCQ cocktail) to mitigate disease progression, to provide resources rejected (deja vu) to mitigate Planned Parent/hood and other venues, to adopt anti-fascist standards that, among other things, did not force restrictive mandates, including masks, that are known from controlled studies to statistically increase infections in anything less than N95 following strict protocol.

So, am I to assume Pakistan has all of its gender issues straightened out and my money can be used for something else?

What in incredible idea by the communist pedophile. Let’s pay them MORE for their failures.

Seems to me Biden, Blinken & Co. would get better value for their money if they just flushed it down the toilet.

President Joe Biden’s administration will pay more than $200 million to the World Health Organization (WHO) . . .

Could someone please link to the congressional authorization that allows the executive branch to waste $200 million on payment to the CCP controlled World Health Organization? Or is this just simply another one of Biden’s massive number of Executive Orders. Just wondering.

No surprise it’s just a payoff for WHO’s role in not doing their job and ignoring the CCP virus.