One more violation means Trump is done on Twitter. 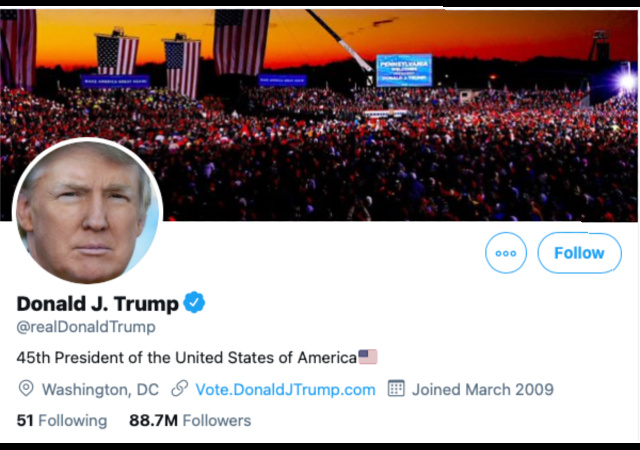 This means that the account of @realDonaldTrump will be locked for 12 hours following the removal of these Tweets. If the Tweets are not removed, the account will remain locked.

However, if Trump violates another rule, Twitter will ban him for good.

But he is now in a no strikes left zone per Twitter, which means one bad tweet and he’s out for good. https://t.co/imr72Bm9EW

Trump needs to post those tweets on another service, better yet, post all of his material on another platform.

I had posted DOJ-FBI crime stats regarding black crime to Twitter in response to false claims regarding Black Liars Matter, they demanded that I remove it, and I told them to F themselves. No one really needs Twitter, Facebook, or Goggle.

If we all go to other platforms, it will really damage these arrogant companies.

You don’t get to steal a Presidential Election without consequences. The whole country is going to lose. And, we are all going to lose something.

Sorry to see he bent the knee to twitter.

Trump needs to announce he is moving to Parler.

Zuckerberg just banned him indefinitely. With the loss of Georgia, he has no concerns of losing his 230 protections. That’s the green light for all tech companies to move forward with outright censorship.

since the “violations” are arbitrary and capricious, it is only a matter of time.

i second the emotion that he should move to Parler, albeit he should have done that a year or two ago. had he done so, Twatter would have been a backwater by now.

What were his offending tweets and I guarantee you will find many from Democrats that is actual incitement.

He tweeted that everyone should stay peaceful and go home. I guess that was an egregious violation of their (double) standards.

Welcome to your New Overlords, America.

I, for one, welcome our new #MediaIndustrialComplex overlords. All hail Zuckerberg and Dorsey.

It is obvious that for the time being the leftist unified government will certainly do nothing about big tech censorship of non-leftist voices.

That means to get rid of the excess interpretation of section 230 protections there needs to be an effort to get the courts to reverse course.

Assuming that sweeping immunity interpretation is the correct way to read the law, could this law be a violation of the First Amendment? “Congress shall make no law (…) abridging the freedom of speech”

One could argue that granting a charter to private companies to abridge the freedom of speech of others as is precisely the content of this immunity for censorship indeed does violate the first amendment and must thus be struck down as unconstitutional.

There certainly are problems to overcome, but we obviously need to get creative unless we want to allow the Government to ride roughshod over our rights by enlisting private companies to do it for them.

I assume Trump will be summarily deplatformed by everybody on Jan 20.

We’ve been saying for years that Trump shouldn’t be using Twitter the way he was, and were shouted down by his cultists. Now he’ll dance to Twitter’s tune or they’ll stop the music.

Is the “we” you and the little mouse in your pocket?