He said “peacefully and patriotically.” 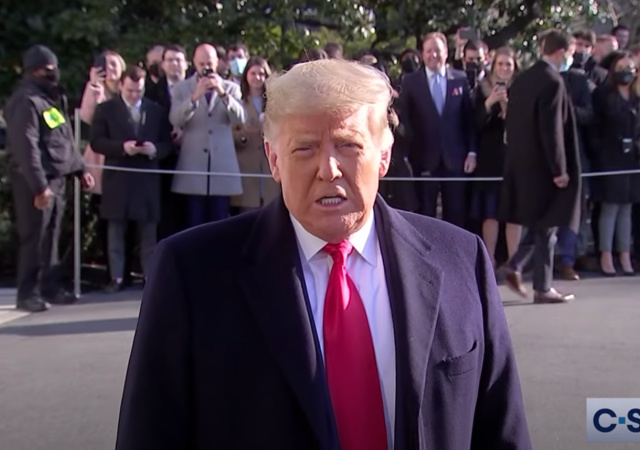 President Donald Trump defended his remarks made at the Save America Rally, which many have said incited the riots at Capitol Hill.

President Trump speaks to media at White House: "We want no violence…on the impeachment, it's really a continuation of the greatest witch hunt in the history of politics…I think it's causing tremendous danger in to our country…I want no violence." pic.twitter.com/XjiIfLrrTS

Q: "What is your role in what happened at the Capitol? What is your personal responsibility?"

President Trump: "If you read my speech…people thought that what I said was totally appropriate." pic.twitter.com/90Pdt8xFSz

Trump said to the media: “If you read my speech, and many people have done it and I’ve seen it both in the papers and in the media, on television, it’s been analyzed and people thought that what I said was totally appropriate.”

Here is a link to Trump’s speech at the rally.

We have come to demand that Congress do the right thing and only count the electors who have been lawfully slated, lawfully slated. I know that everyone here will soon be marching over to the Capitol building to peacefully and patriotically make your voices heard. Today we will see whether Republicans stand strong for integrity of our elections, but whether or not they stand strong for our country, our country. Our country has been under siege for a long time, far longer than this four-year period. We’ve set it on a much straighter course, a much … I thought four more years. I thought it would be easy.

I’ve read articles that only include the first portion of the speech I posted above. They “forgot” about the second part, which explicitly says “peacefully and patriotically.”

But to say he incited the Capitol Hill riots is ridiculous.

What policies has Trump pursuredt that people oppose? Democrats and Never Trumpers hate Trump so much they damage the country rather than let him achieve anything that helps the people of our nation. TRUMP in ‘24!

Even though mostly stick to conservative talk radio am getting very tired of hearing that rally was some kind of revolution. I wish I could have gone as I am sure it would have been just another Trump rally like one I did get to. There was nothing wrong with it and while I am suspicious it was only Trump fans a couple broke windows is not a revolution. The Democrats Propaganda ministry and Democrat politicians are making it out to be the storming of the Bastille.

If Trump had wanted a revolution, then he could have had one.

I like Trump because he is not a polished empty suit. He stands head and shoulders above the scum which populates the Beltway. I have not seen even a glimmer of the kind of thing which have made the swamp in Trump.

Lets be clear, they hate Trump because he is his own man, he is not corruptible. He mucked up their business as usual.

Trump was too honest for the beltway to accept him.

Trump is not an honest man, agree with him by all means on his policy platform but pretending he is good well that doesn’t work far to many instances of him screwing people over and lying.

If you will read his autobiographies you will easily see his point of view – unless you are willfully blind.

Read his books and then be honest. Well, at least you’ll get half way there. One out of two is a good start.
.

Don’t worry, I’m sure your liberal friends will keep inviting you to all the right cocktail parties.

I think he’s an asshole also yet I voted for him twice.
want to make a fking error by talking down to me like that?

Mary has posted here at LI and in our newsletter that she did not vote for Trump in ’16 (I forget who she says she voted for, but I know it wasn’t Trump or Hillary) or ’20 (she supported Kanye West), so I’m not sure your comparison applies here.

Besides, I think he crafted his response that way because he sees the statements as virtue signaling. I don’t agree; I think that is what Mary thinks, and she is entitled to her own thoughts and to express them here.

“entitled to her own thoughts and to express them here.”

I agree, but she should also be able to take constructive feedback.

I dated for about ten years before marrying, and had many women talk and even grab my privates, and many enjoyed being grabbed. I do not thing a comment about such is a cardinal sin. We ate innately sexual, and both talk about and act on it.

What gets me about the kitty grabbing I’d that he was describing what females allow celebrities to get up.

Also, turns out that the ones doing most of the kitteh grabbing were Democrats ??

Mary is free to express her opinions and we are free to challenge them. Isn’t that why we’re here?

There are some things I don’t like about Trump, but his policies are (soon were) good for the nation. Tax policies favoring the “rich,” such as those which put more money in the pockets of so many with incomes less than $100K a year? Foreign policy that enables us to stand up to our enemies and see real peace develop in the Middle East? Smoothing the way for development of vaccines to fight the worst plague in decades? Somebody tell me what the problem is.
.

was no call for the liberal friends statement. she was not rude when she said she didn’t like trump unlike the assh*le here

The violence was all Antifa. Watch Michael Yon’s video before YouTube pulls it:

Just no, there is very little evidence of any Antifa involvement. SO far ive seen evidence of 1 who claimed to be observing.

To be blunt Mary I don’t give a flying rats fuck if you don’t like Trump. Just stick to the facts without the need to opinionate and editorialise and we will get along just fine.

Yeah.
Who else doesn’t like Trump? Maybe there should be a color coding system, for people who do and don’t like Trump. Or tattoos. Or little pieces of cloth. Legal Insurrection has readers because the people doing the writing seemed clear-headed. Tell us how you really feel, and we can vote with our feet.

Delusional Rags does not like Trump. Supposedly an attorney, with a very tin skin.

Isn’t the point that the journalism is good, there are a spectrum of views on Trump and that’s a separate issue. Provided Mary’s dislike of Trump doesn’t impact on the quality of the article who cares

…I want no violence

Which of course will be interpreted by the democrats as the super secret Trumpian code phrase to the violent domestic terrorists and insurrectionists to hie themselves back to DC to commit acts of violence during the Jan 20th inauguration.

See if the democrats don’t do that.

No the Democrat argument is that he has whipped up a false narrative thats caused his following to be whipped up in a frenzy.

This will not be one of those usual throwaway elections with the challenger set to fail.
Donald Trump will not run again, no matter what happens with the current impeachment.
Neither will Biden, who will be lucky to finish the term.

At this point, we should all hope that Biden survives the next 4 years, as Harris will be worse.
Biden is a Democrat who deep down is moderate, but he will be bullied by the fringes to be more radical.

Harris will not win the nomination in 2024, as Democrats aren’t nearly into the “next in line” concept as Republicans. The Republican Party will attempt to block the Trump kids from running much like the Democrats blocked Bernie.

2020 will be the last election where “The Silent Generation” (born 1925-1945) will dominate the leadership. Leadership will now move to the tail end of the “Boomers”.