Trump Bids Farewell: ‘We Will be Back in Some Form’

Trump Bids Farewell: ‘We Will be Back in Some Form’

“I hope they don’t raise your taxes but if they do, I told you so.” 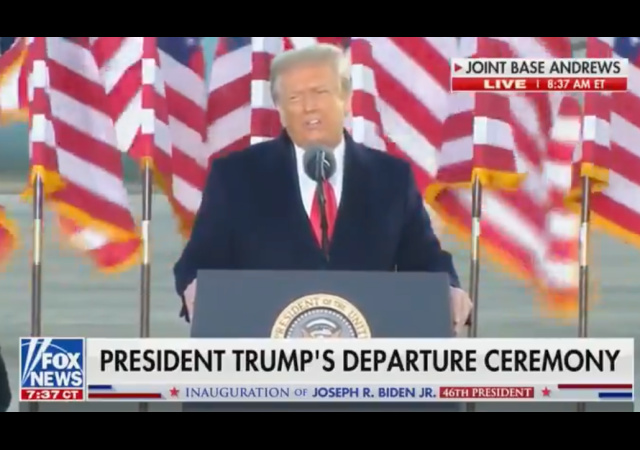 President Donald Trump and First Lady Melania Trump addressed the nation before they took off to Florida.

“We will be back in some form,” Trump promised his supporters.

He also said that we will “see incredible number start coming in if everything is left alone,” but to “be careful.”

“I hope they don’t raise your taxes, but if they do I told you so,” he said.

President Trump: It is my greatest honor and privilege to have been your president, I will always fight for you pic.twitter.com/Q1VdiJEOpu

TRUMP: "I hope they don't raise your taxes but if they do, I told you so." pic.twitter.com/QfmgFp76n0

TRUMP: "You are amazing people. This is a great great country. It is my greatest honor and privilege to have been your president… I wish the new administration great luck and great success." pic.twitter.com/jWHr4qH6mh

"We will be back in some form," President Trump says at the end of his farewell address.

"I want to thank all the great people of Washington, D.C., all of the people that we worked with to put this miracle together. So, have a good life, we will see you soon. Thank you." pic.twitter.com/jaaI9EeBG0

MELANIA: "Being your First Lady was my greatest honor." pic.twitter.com/wehpsBoK27

This is another example of Trump’s uncultured behavior:
“I want to thank all the great people of Washington, D.C.,” but he doesn’t have enough time to mention the seven by name?

You’ll be getting all the “cultured” behavior you can stomach soon enough.

The movement started as the TEA org. then it became MAGA. The left has spent over a decade attempting to crush it and they failed.

They both got left at the curb by GOPe

You mean mcconnell and gang have been trying to destroy it, don’t you?

Sotomayor was never a brain trust to begin with.

Where do I sign up for the Patriot Party?

I’m all done with the “R Division” of the Uniparty!!!

Yes, I am waiting to hear what Trump says: Is he sticking with the gop as Ron Paul joined them to win? Or does he want a 3rd party?

He’s already tried the Reform Party and that didn’t work out. He may agree with me, that starting a third party isn’t the best choice; that the best choice is infiltrating the gop. And ridding it of the “e.”

As was mentioned … Paul in “Dune”… he who can destroy something controls it. Trump has the power to destroy the GOP (are you listening Senator Turtle???). I would think the GOPe is stupid enough to think that this is the last of DJT and his followers but even their country club lifestyle cannot stand up to a real political incursion.

I unsubscribed to the latest RNC email and Nikki’s PAC. It’s fun.

Personally, I think he should have declared today a national day of mourning as his last official act.

It would only be a half-day of mourning since his authority expired at noon. Let’s call it a Morning of Mourning.

More like a “Wake-ful” mourning morning and then on to just mourning. This AM was a great time to take a big swig of Irish whiskey before the rest of our existence started.

I think I’ll stick with Kentucky bourbon, and plenty of it.

Laphroaig scotch for me, please.

74+ million people have a two year opportunity to make a devastating economic impact upon the politicians, institutions, and corporations who refuse to represent our interests. They may have successfully rendered your vote temporarily meaningless, but they ALL still worship your money. No need to announce anything as fancy as boycotts. Simply deny them the funding that enables their very existence. The GOPe would be a good place to start.

Even though you may not know who you can trust anymore you can readily identify who and what definitively cannot be trusted. They’ve made it exceptionally easy over the last few years. They’re presently falling all over themselves to tell us who they are, so pay attention. Stop funding them in any fashion. Put your money where it works for you, unless paying people to kick you in the nuts is your thing.

Just as “Remember the Alamo!” and “Remember Pearl Harbor!” were rallying cries, so should #RememberElection2020! also be.

Hope you also remember how Trump never alleged voter fraud in a court of law only in courts of public opinion, and that he kept his supporters at home by trying to make that sink in rather than admit he lost (which cost us the senate).

You did notice that the evidence was never ever presented in court right? It hasn’t had a day or even second in court as of this day..

Lets not sully the memories of Hero’s fighting for freedom at the Alamo, or Pearl Harbor by grouping them in with a ridiculous show of entitlement that was the capitol storming.